Jäger series were born in response to some of the key industrial pains and customer concerns: how to reduce LID（Light-induced Degradation）, LeTID(Light and elevated Temperature Induced Degradation), internal loss, shadow shading and BOS cost. As a new generation of high performance, high cost-effective and reliable products, Jäger series have a total of four types of products: RSM120、RSM132、RSM144andRSM156, of which the highest module conversion efficiency can reach up to 20.6%，and the highest power output can reach up to 440Wp. 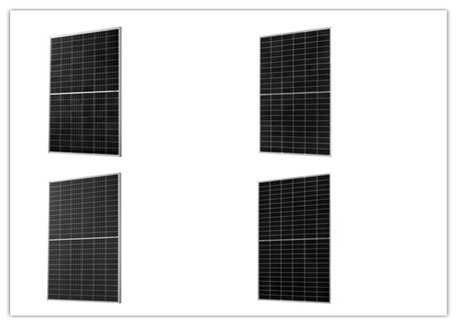 The reduction of module inner power loss can efficiently increase the module actual power output. This lossis caused by several negative factors such asthe light reflection loss, the conductor/cable resistance loss, and theinter-electrical connection loss and so on. To decrease these negative affections, various methods have been researched and used in PV industry, Jäger series products also use some advanced methods to decrease this inner loss. The Half-cut cell technology is one of the methods which can decrease the inner electrical connection loss. This kind of Half-Cut design not only improves the power output of the module, but also effectively reduces the adverse effects of shadow shading to the minimum. At the same time, the working temperature of the Half-cut Cell module is 2 to 3℃ lower than that of the Full cell module due to the reduction of the current. In the case of shading, the highest temperature of the module is about 20℃ lower than that of the Full cellmodule, which greatly improves the stability of power output and the long-term reliability of the module.

As a cost-effective product, the application of Jäger products can effectively reduce the BOS cost of PV system. The BOS cost of a 50 MWp ground-mounted power plant is simulatedand compared by Risen Energy engineers and technicians in the White Paper, using the 335 Wpmodule and Jäger 400Wp module. The results show that the use of high power modules can reduce the quantity of modules, giving rise to the reduction of construction and installation costs of ground piles, brackets, DC cables, shunt boxes and photovoltaic field areas.

Risen Energy Co., Ltd. was founded in 1986 and listed as a Chinese public company (Stock Code: 300118) in 2010. Risen Energy is one of the pioneers in solar industry and has committed to this industry as a R&D expert, an integrated manufacturer from wafers to modules, a manufacturer of off-grid systems, and also an investor, a developer and an EPC of PV projects. Aiming to deliver the green energy worldwide, Risen Energy is developing internationally with offices and sales networks in China, Germany, Australia, Mexico, India, Japan, USA and others. After years of efforts, it has reached a module production capacity of 8.6GW. While growing rapidly, Risen Energy keeps a stable pace with an average debt ratio at around 50% from 2011 to 2018.