Big Indian cities are pivotal to India’s growth and economic development. However, these cities have grown erratically and unsustainably, resulting in chaotic traffic, unhealthy pollution levels, lethargic administrations, mounting waste dumps, legacy power infrastructure and frequent power cuts. The Smart Cities Mission launched by the government on June 25, 2015 is aimed at tackling these problems. A key element of the mission is a focus on clean technologies – for transportation, power supply, governance, basic urban infrastructure services or overall quality of life.

For the renewable energy sector, this implies a significant opportunity, which the industry has been leveraging in a big way. The guidelines for the Smart Cities Mission require that at least 10 per cent of a city’s energy needs are met by solar power and at least 80 per cent buildings should be green and energy efficient. This is already being done in various forms across the 100 cities selected under the programme. A large number of rooftop solar tenders have been released by municipal corporations and other appointed agencies across these cities. This has been facilitated by a progressive regulatory framework developed by central and state policymakers and regulators. Effective and efficient utilisation of available rooftops and net metering facilities allow excess generation to be fed into grid. Some cities under the mission have gone a step ahead and have changed their building by-laws to make rooftop solar installations mandatory in all new and upcoming buildings.

While this will definitely help in fulfilling the basic Smart Cities’ target for solar energy, some cities are going the extra mile to completely change their energy mix in favour of renewables. Small solar parks are being made an integral part of some smart cities. A prime example is Diu, which has become the first district in India to run entirely on solar energy during the day. The island, which was earlier fully dependent on the Gujarat grid for its power needs, now has a 9 MW solar park that generates sufficient electricity to meet the daytime power demand. Apart from these, solar energy is being harnessed in other forms such as solar street lighting, solar water heaters, solar pumps, solar traffic signals and solar concentrators-based cooking.

Another renewable energy technology contributing to this mission is waste to energy (WtE). With the growing urban population, environmental concerns and stressed resources, there is an urgent need to address the challenges associated with the disposal of municipal solid waste (MSW). WtE technologies provide sustainable methods for generating electricity while helping to dispose of MSW. Solid waste can be converted into energy and other bio-products that would make these smart cities self-sustaining in energy. Sewage treatment plants (STPs) producing biogas and power are also being planned for smart cities. However, compared to solar power, the development of WtE solutions has been extremely slow owing to a number of economic and logistics challenges.

The smart cities of the future will have greater power demands and warrant an innovative approach to power infrastructure. Renewable Watch takes a look at the emerging role of renewable energy solutions under the Smart Cities Mission.

In 2008, Kolkata’s Rabi Rashmi Abasan became India’s first solar housing complex with 2.1 kW of PV integrated in each house and a further 8 kW at a community centre. However, it was only post the launch of the Jawaharlal Nehru National Solar Mission in 2010 that the concept of solar power started gaining popularity. The subsequent decline in solar power prices made it an attractive and viable proposition to be considered for wider adoption. So much so that it became a key element of the Smart Cities Mission. Under this, 100 smart cities have been selected in four rounds. The first list of 20 cities was announced in January 2016, followed by a fast-track list of 13 cities in May 2016. The second list of 27 cities was announced in September 2016. The third list of 30 cities was announced in June 2017 and the final list was announced in January 2018.

With solar being a key priority of the Smart Cities Mission, the Ministry of New and Renewable Energy also devised a Solar Cities Masterplan in 2015, directing all municipal corporations and city councils to create a Solar City Cell and constitute a Solar City Stakeholders Committee. Under this, besides promoting the uptake of rooftop solar, the civic bodies were instructed to promote a National Rating System for the construction of energy efficient green buildings with a strong focus on commercial and public facilities, and to amend building by-laws to make solar water heaters mandatory. Following this, around 90 municipal corporations in eight states have mandated solar power heaters in residential and commercial complexes. Various civic bodies are also offering rebates on property tax for solar energy use.

In the latest development, the Karimnagar Municipal Corporation in Telangana has made it mandatory for all buildings on more than 300 square yards  – whether commercial buildings, houses, apartment complexes or community halls – to install solar panels on rooftops. According to a law that has come into effect in March 2019, construction permits will not be granted without a provision for solar installations. Karimnagar is the first municipal corporation in the state to make solar installations mandatory for new buildings under the Smart Cities Mission. The civic body will offer a 30 per cent subsidy for installations by state electricity distribution company Telangana State Renewable Energy Development Corporation (TSREDCO). The municipal corporation is also adopting net metering, with the Northern Power Distribution Company Limited to buy surplus solar power from property owners at Rs 3.50 per kWh.

Telangana is not the only state pursuing solar through municipal corporations. The building rules of the Kolkata Municipal Corporation specify that any building that is more than 15.5 metres (five storeys) in height must install rooftop solar. Other municipalities in West Bengal have made the cut-off elevation 14.5 metres, equivalent to four storeys.

After Diu’s success, several other cities are opting to set up small solar parks. In December 2018, Tiruchirappalli Smart City Limited tendered 2.4 MW of ground-mounted solar PV projects to be developed at the Panchappur STP located near Madurai by-pass road. The Tiruchirappalli City Corporation has already tied up with TANGEDCO for power offtake from the plant.

Sustainable waste management has proved to be a massive challenge for cities in India. For years, ULBs and successive local governments have found it challenging to equip cities with institutional and technical support to combat the problem of increasing waste generation and ensure scientific disposal. Dump yards have mushroomed in residential areas and landfills are overflowing beyond their permitted capacity with mixed waste. As per an estimate by Global Methane, a global partnership group working on methane emissions, India currently disposes a whopping 90 per cent of its solid waste in landfills unscientifically.

WtE plants are the best solution to efficiently utilise the waste in these landfills, but its viability across cities is yet to be proved. The segment has failed to attract large investors due to a variety of reasons. Unsegregated waste from households and commercial establishments remains the biggest challenge for WtE plants. The technology has also failed to provide conclusive evidence that it is a completely emission-free process. The lack of technical expertise with ULBs to understand the implications and operation of a public-private partnership (PPP) model and other related issues is also a major obstacle in terms of implementing this technology successfully across the country. From an energy policy perspective, WtE remains a very costly proposition as compared to cheaper alternatives like coal. It is, therefore, not going to be an easy task for the smart cities to undertake this mode of power generation. 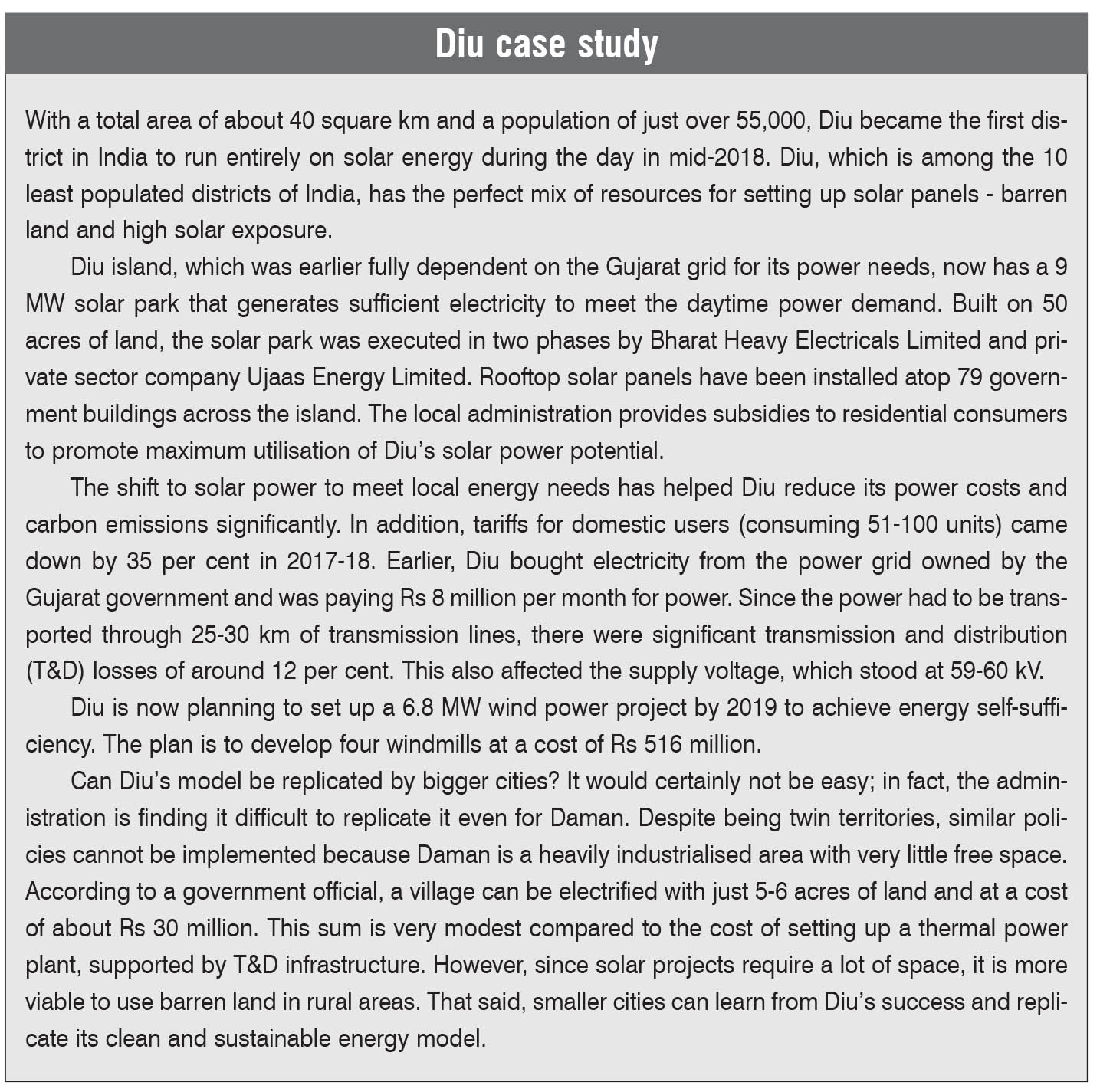 Population-dense cities are significant sources of power demand, consuming two-thirds of the world’s energy and producing a similar proportion of global carbon emissions. This places cities at the heart of the climate change discussion, and raise an important question for modern city authorities, planners and utilities – how can power infrastructure be developed in a way that supports economic growth and a high quality of life while also integrating more renewables  and radically reducing the impact of cities on the environment? This is one of the several questions that can be answered by the smart city concept, which has been garnering policy support in recent years in India and globally. The concept of distributed rooftop solar plants will help build resilience at the grid and the system level.

On the demand side, the utilisation of solar water heaters, replacement of street lights with solar lighting, etc. will help reduce the burden on the central grid. In future, the use of electric vehicles (EVs) will become an important part of the decarbonisation and air quality efforts, especially in cities, but handling the extra demand generated by tens of thousands of energy-hungry EVs and plug-in hybrids will be a key challenge for energy management in a smart city. Every bit of savings from efficiency schemes and demand-response incentives will be important in this context, while new vehicle-to-grid innovations could see EVs feed electricity back into the grid during periods of peak demand, if technical and regulatory hurdles can be overcome.

In sum, while a beginning has certainly been made, there is still a long way to go. For power utilities and other renewable energy stakeholders, smart cities present an all-new world of opportunities, but challenges as well. What is needed is a progressive approach, innovative solutions and effective strategies to make the leap to the smart cities of the future.

In the budget speech on February 1, 2021, the finance minister announced that a National Hydrogen Energy Mission will be launched in 2021-22 for producing hydrogen from green energy sources. This announcement is exciting but […]