Over 120,000 avian guests from Siberia and other Central Asian countries make the Pong Dam Lake Wildlife Sanctuary, located in Kangra district of Himachal Pradesh, their home during winters. In December 2018, in order to track the movement of these birds and keep a check on illegal activities like poaching and bird hunting, a solar-backed surveillance system was deployed in the sanctuary. This is the first solar-powered surveillance system installed in a wildlife sanctuary of Himachal Pradesh.

Spread over an area of 207 square km, the sanctuary was accorded Ramsar status (reserved for wetland sites of international importance) in 2002. Most parts of the sanctuary do not have access to grid power supply. In view of this and the fact that wires can be dangerous for birds, a wireless and solar-powered surveillance system was designed.

The four units of the solar-powered surveillance system have been installed at vantage points. Each of these units comprises a 4 megapixel pan-tilt-zoom camera mounted on a pole, with an IR range of 150 metres and a detection rage of 1 km. These units are equipped with solar panels made up of solar or photovoltaic cells to trap sunlight and convert it into electricity for efficiently powering one of the security cameras.

For each surveillance unit, two solar panels of 75 watts each have been installed along with 20Ah rechargeable solar batteries. These are mounted on a solar panel pole and connected to a wireless transmitter, which sends the video feed to a receiver.

The receiver is placed in a central surveillance centre to monitor and record the footage 24×7. Also, the security camera can be connected to a network for viewing the footage from virtually anywhere! The biggest advantage of these cameras powered by solar electricity is that they can be operated even in the worst weather conditions.

One of the surveillance system units has been deployed at the main entrance of the sanctuary. The second has been installed to monitor a vulture feeding centre (the area is a natural breeding ground for scavengers.) It is used for studying the behaviour of these natural scavengers as well as their numbers. A few vulture species have witnessed a sharp decline in number over the past few decades. Another camera is installed at the water mounds on the shore of the lake. The fourth surveillance unit is deployed at the Rancer Island, which does not have any power supply line. 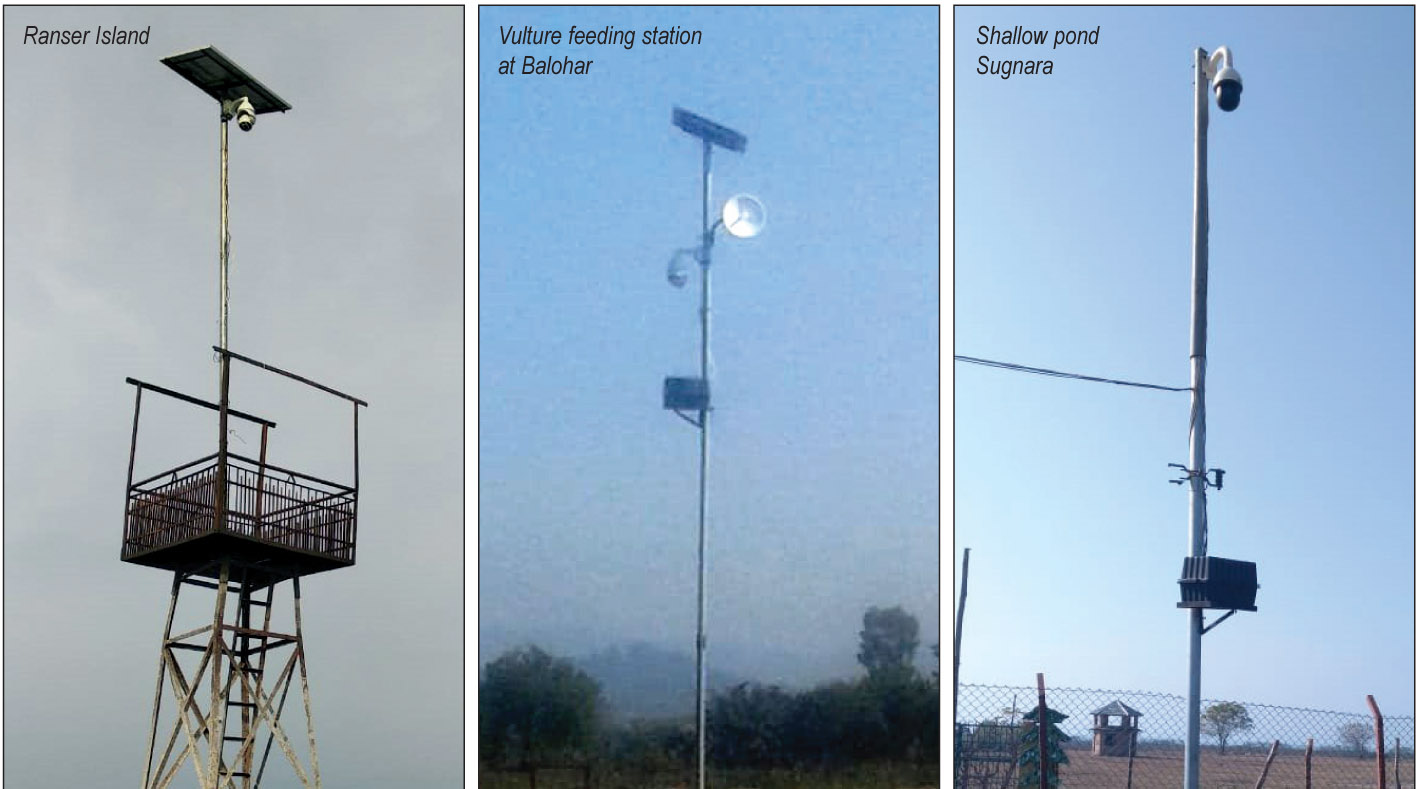 The guest house facility for bird watchers and tourists on this island also runs on solar power generated by a 10 kWp solar power plant. Prior to the installation of the plant in 2013, a diesel-powered generator was used to provide electricity, which caused noise and air pollution, scaring the birds away and adversely impacting the ecosystem. Now, a solar power plant is being used, which helps run over a dozen fans and light up the guest house on the island, which is a paradise for bird watchers.

Except for the camera installed at Rancer Island, all three cameras are deployed on the mainland and are located at a distance of 1-2 km from each other.

According to Krishan Kumar, Divisional Forest Officer, Hamirpur, these solar-powered cameras, which provide live images and videos of the migratory birds, are proving to be very helpful for round-the-clock surveillance as no light source is required. This solar-powered surveillance system is not only environment friendly, it is also safe. Being wireless, it does not cause any hindrance to the movement of these migratory birds that attract thousands of tourists every year.