The ports and shipping sector is no exception to the ongoing green movement affecting nearly all modes of transport in the country. In January 2016, the Ministry of Shipping launched the Green Ports Initiative under Project Green Ports, to encourage major ports in India to use renewable energy. With the achievement of this initiative, India will become the first country in the world to run all government ports on renewable energy. Prior to this, in October 2015, the Indian Ports Association and the Solar Energy Corporation of India (SECI) had signed an MoU for the development of solar power projects at Indian ports.

Currently, 12 of India’s major ports are working towards installing 136.5 MW of renewable energy capacity by 2018-19. This includes 91.5 MW of solar and 45 MW of wind power projects. The total investment required for installing this capacity is estimated at Rs 7 billion, of which Rs 4.1 billion is being used for solar power installations and Rs 2.9 billion for wind power projects. The wind energy projects are being executed at Kandla port, V.O. Chidambaranar (VOC) port and Kamarajar port.

According to the Ministry of Shipping, as of July 2017, 23 MW of renewable energy capacity had been commissioned at 11 ports. This included 15.2 MW of solar power capacity, of which 9 MW was installed at Visakhapatnam port and 4.35 MW at New Mangalore port. Other ports that installed solar capacity were VOC port (0.5 MW), Mumbai port (0.125 MW), Chennai port (0.1 MW), Mormugao (0.24 MW) and the Jawaharlal Nehru Port Trust (0.82 MW).

The renewable energy projects being set up at the ports will not only help reduce the carbon footprint of the ports and shipping industry, they will also reduce the operational expenditure. When commissioned, the projects will lead to an estimated emission reduction of over 136,500 tonnes and cost saving of Rs 750 million annually.

While the Green Ports Initiative has taken off well, the industry faces certain challenges in the achievement of short-term milestones. The primary challenge remains the acquisition of land that meets specific project requirements, such as no shading for solar projects. The lack of low-cost financing has been another hindrance in the execution of these projects. However, given the declining financial costs, the final targets are likely to be met.

In January 2018, in an ironic development, 2,000 containers carrying solar modules worth $150 million were stuck at various ports in the country, delaying solar project development and resulting in losses due to time overruns. The confusion around the classification of solar modules and the import tax applicable on them led to the hold-up by customs officials. In April 2018, the Central Board of Indirect Taxes and Customs exempted modules equipped with bypass diodes from the additional duty of 7.5 per cent, prompting the release of the consignments stranded at ports. 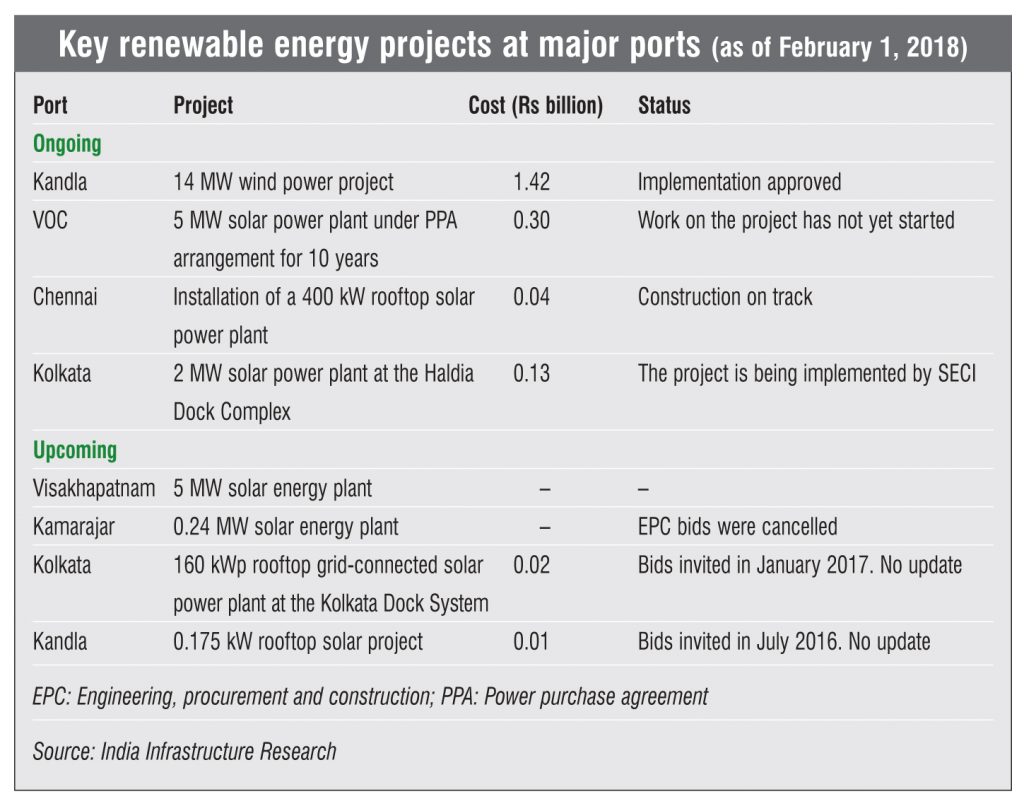 According to Renewable Watch Research, as of February 2018, eight renewable energy projects at major ports are in various stages of development. These projects entail an investment of about Rs 1.91 billion.