In a notable development, the recently concluded 860 MW solar project auction conducted by Karnataka Renewable Energy Development Limited (KREDL) saw solar power tariffs take a U-turn. The lowest winning bid of Rs 2.97 per unit, quoted by Shapoorji Pallonji, is over 50 paise more than the winning bid of Rs 2.44 per unit received in the previous solar auction held in Rajasthan in 2017. While the auction has come under a cloud with one of the participants moving the Karnataka High Court over alleged irregularities in the tendering process, the results portray a new trend of increasing solar tariffs.

On a similar note, an auction to award 500 MW of wind power contracts in Maharashtra saw tariffs firming up, breaking the streak of plummeting prices quoted in the past few wind power auctions. The auction was conducted by Maharashtra State Electricity Distribution Company Limited (MSEDCL) as it seeks to meet its non-solar renewable purchase obligation (RPO). The tariffs offered by the successful bidders ranged from Rs 2.85 to Rs 2.87 per kWh.

The lowest bid of Rs 2.85 per kWh is 17 per cent higher than the bid price of Rs 2.44 received in a recently completed 2 GW tender by the Solar Energy Corporation of India (SECI). The record lowest wind tariff in India however is Rs 2.43 per kWh, which was registered in December 2017 for a project under the 500 MW tender in Gujarat.

Winners under the KREDL tender

The 860 MW of auctioned projects is distributed across 43 talukas of Karnataka, with 660 MW spread across 33 talukas auctioned under the open category, where imported equipment is allowed, and 200 MW across 10 talukas under the domestic content requirement (DCR) category, where only locally made modules are permitted.

The lowest bids in the open category were by Acme Solar in Kudligi taluka and by Shapoorji Pallonji in Jagalur taluka, both seeking Rs 2.94 per kWh. The highest bid of Rs 3.34 per kWh was quoted by Asian Fab Tech in Doddaballapur taluka. Most of the winning bids across different talukas were above Rs 3 per unit.

Of the nine winners, the biggest was Shapoorji Pallonji Infrastructure Capital with 185 MW, followed by Acme Solar with 106 MW and ReNew Power with 99 MW. The other winners were Asian Fab Tech with 85 MW, TEP Rooftop Solar India with 55 MW, Greenko with 45 MW, Eklade Solar with 35 MW, Rays Infra with 30 MW and Max Planck Solar Farms with 20 MW.

In the DCR category, which has been plagued with several problems, the results for 100 MW of capacity across five talukas were withheld. Sources claimed that they did not receive the bids at all. For the remaining 100 MW across another five talukas, the winning tariffs were predictably much higher than in the open category. Emmvee Photovoltaic Power won 80 MW across four talukas with bids of Rs 3.52 to Rs 3.54 per kWh, while the remaining 20 MW went to Svarog Global Power at Rs 3.54 per kWh. Thus, effectively, only 760 MW was auctioned across 38 talukas.

Winners under the MSEDCL tender

The lowest tariff proposals under the 500 MW wind tender came from Adani Green Energy (MP) Limited and KCT Renewable Energy Private Limited, each securing 75 MW. The list of winners also includes Inox Wind with 50 MW of capacity, Mytrah Energy with 100 MW, Hero Wind Energy Private Limited with 75.6 MW and Torrent Power, which had bid for 146 MW but was awarded 124.4 MW. 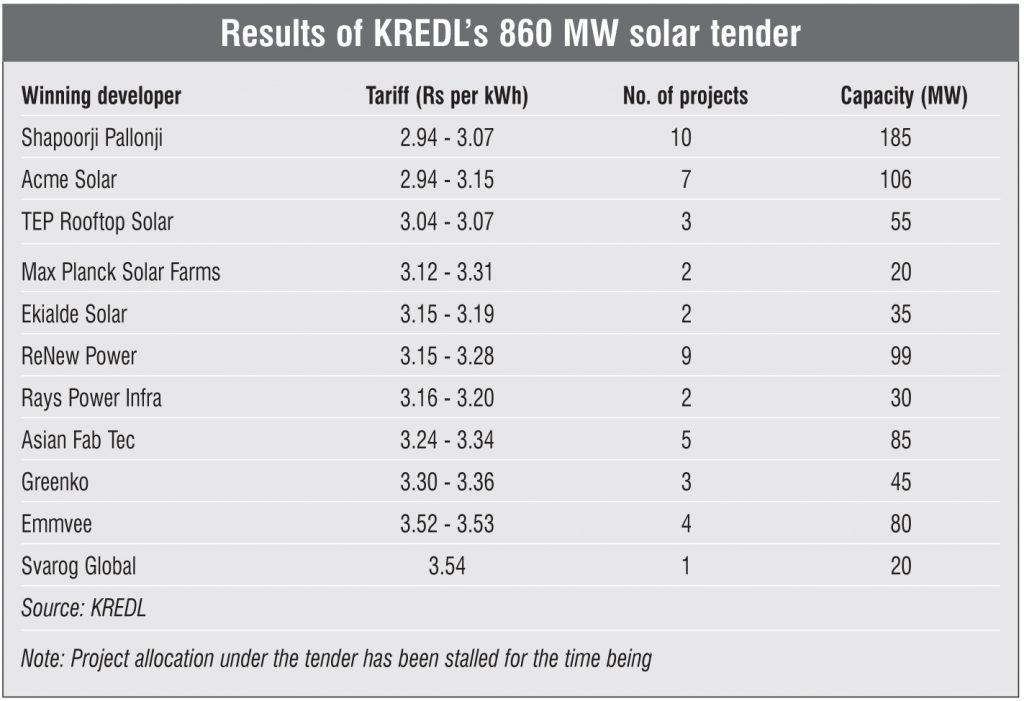 This not only implies that bidders are getting less aggressive and more cautious, but also the fact that discoms are getting ambitious in terms of ensuring the lowest possible tariffs by setting low benchmark costs. Further, the results of the solar tender have raised certain concerns for the industry. One pertains to the striking (50 paise) increase in the winning tariffs. This could be a consequence of solar panels being subjected to 7.5 per cent customs duty and various other cesses in the recent budget, as well as the industry’s anticipation of input costs going up (with the government likely to impose safeguard and anti-dumping duties, and an increase in global price levels). Another concern is the current level of domestic manufacturing in India. Barring a few large players, the domestic manufacturing industry is not geared up to match international price and quality standards, as is reflected in  the results of the DCR part of the 860 MW tender.

The results of the recent auctions imply that bidders are getting more cautious and discoms are trying to ensure the lowest possible tariffs by setting low benchmark costs.