Wind power is one of the more mature sources of renewable energy in India, with an installed capacity of 32.8 GW as of January 2018. This stability along with the shift to competitive bidding from the feed-in-tariff regime is helping the country move rapidly towards the 60 GW by 2022 target. However, most wind-rich sites run on obsolete wind energy technology with low capacity rating. Thus, the industry has no choice but to compete for the few good wind sites suitable for greenfield installations. With the National Institute of Wind Energy’s (NIWE) reassessment of India’s potential at 100 metre hub height to be 302 GW, the market has been compelled to innovate and create better technology to harness the untapped potential. As a result, new technologies with higher capacity ratings, greater hub heights and bigger rotor diameters have now emerged as a solution to generate more power from moderate to low wind sites.

The average size of wind turbine generators has increased over the past few years. Most original equipment manufacturers (OEMs) have phased out smaller turbines and offer generators with capacity of over 2 MW. These turbines are especially effective at Class III/IV wind sites where wind speeds are not as good as in wind-rich sites.

Companies have also been in constant pursuit of achieving better efficiencies from wind turbines through the deployment of higher hubs and bigger rotors. To this end, tower heights for nearly every model released recently have been increased. Further, companies are installing longer blades and increasing rotor diameters to enhance the efficiency of wind energy generators. However, these installations require a larger area per MW. Spain-based Acciona has the largest rated capacity turbine in the market at 3 GW along with the largest rotor diameter at 125 metres. The largest hub height belongs to NuPower at 141 metres, followed by Siemens Gamesa and Vestas at 125 metres each. 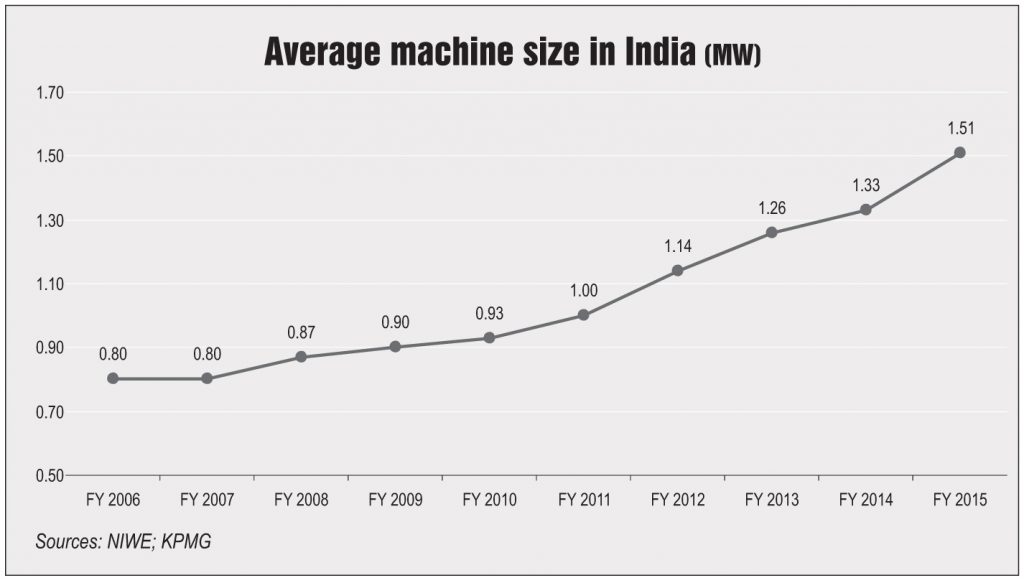 Drives or drivetrains are responsible for converting the kinetic energy of wind into electrical energy. These comprise components such as bedding, gearboxes, brakes and a generator. Of these, gearboxes and generators are the two most important and expensive subcomponents of the drivetrain assembly. The gearbox helps enhance the angular speed of the shaft that rotates the blades, from speeds as low as 25-50 rotations per minute (rpm) to 1,000-1,500 rpm, as required. The assembly of gearboxes and generators helps convert the mechanical rotational energy into electrical energy.

Drives and motors manufactured in India are not adequate to meet the high demand; thus, most of it is fulfilled through imports. Therefore, the government is planning to focus on developing domestic manufacturing capabilities through the Make in India programme, given the upcoming demand to achieve the 60 GW wind power target. Earlier, wind turbine components including nacelles, rotors, blades and energy converters were exempted from central excise duty in a bid to promote domestic manufacturing. However, with the introduction of the goods and services tax, these are now taxed at 5 per cent. Considering the overall decrease in capital costs, this is not expected to negatively impact domestic manufacturing plans. 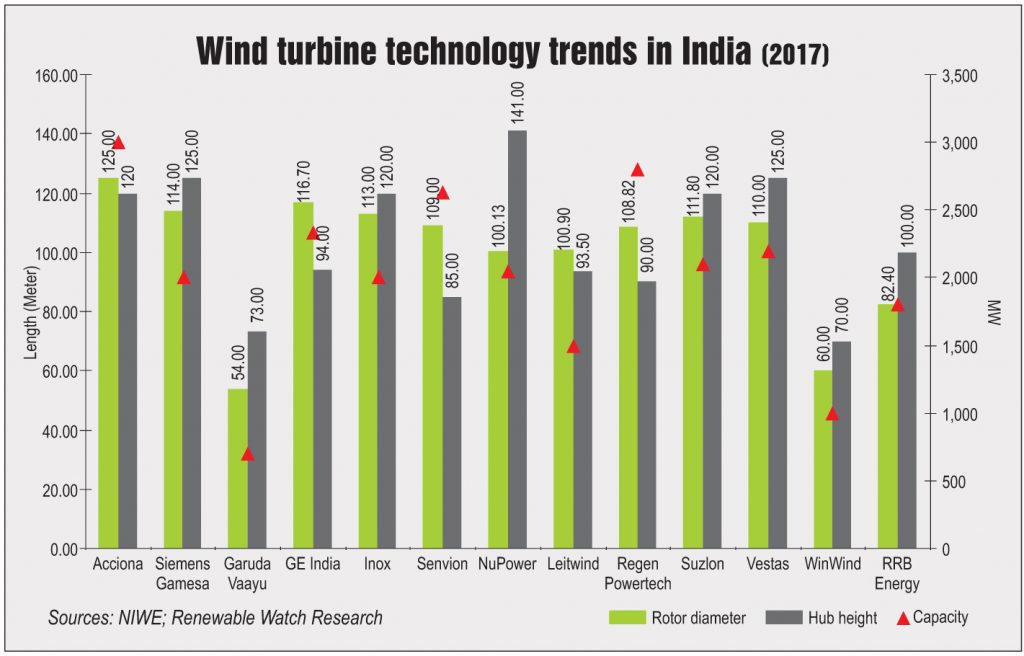 Since drivetrains are one of the key components of a wind turbine, its moving parts are subject to a significant amount of wear and tear. Any deterioration in its components can have a considerable impact on the performance of the wind turbine. Some major challenges to drivetrain technology are deterioration of gears and gearboxes, loss of lubrication, breakage of gear teeth, fatigue-induced damage of the gearbox and generator components, spoiled braking system, damaged yaw bearings and drives, and worn-out wiring systems. Moreover, sustained operation of the wind turbine can lead to fatigue cracks in shafts over a period of time.

As of December 2016, the Indian wind turbine manufacturing capacity stood at about 10 GW. While existing OEMs are in the process of increasing their capacities, new companies have also declared plans to set up manufacturing facilities in the country. Suzlon is the largest wind turbine generator manufacturer in India, with the group’s annual manufacturing capacity currently at 4.2 GW or 35.4 per cent of the total market. The company produces blades, generators, nacelles, hubs and towers, among other equipment. It is followed by WindWorld with a share of 18 per cent, which manufactures wind energy converters at its Daman manufacturing facility, and concrete towers at its Gujarat, Karnataka, Tamil Nadu and Rajasthan facilities.

Inox accounts for 5.7 per cent of the Indian wind turbine manufacturing market. It has an 800 MW facility at Barwani with 400 blade sets, 400 nacelles and hubs, and 300 towers. Its Una facility’s capacity is 550 nacelles, and the Rohika facility has a capacity of 400 blade sets and 150 towers. The remaining 15.9 per cent of the market is occupied by companies ike Orient Green Power Limited, RRB Energy, Pioneer Wincon, Leitwind Shriram and Senvion. 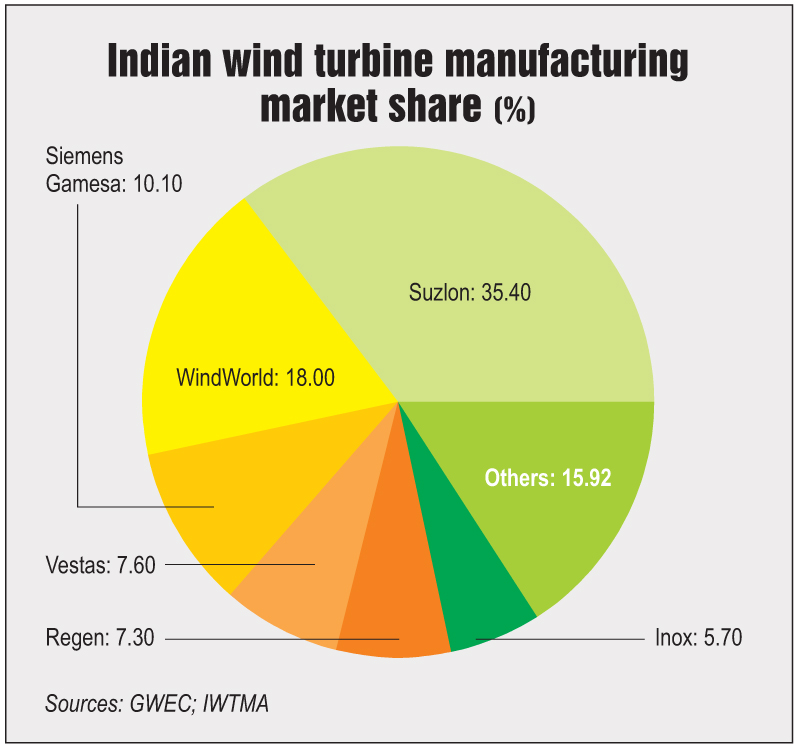 Wind power technology is expected to further improve over the next five years as the country looks to install about 5 GW of capacity per annum. The average rated capacity of machines is likely to remain upwards of 2 MW as the wind-rich sites become increasingly unavailable. Moving forward, repowering is also expected to account for a large share of new turbine installations, further adding to the demand for high efficiency machines. It is, however, important for the manufacturing segment to support technological improvements at sustainable and affordable prices to reduce the dependence on imports.

To this end, many companies have announced their plans to set up or expand manufacturing facilities in India. Brazil-based WEG has entered the Indian wind market with plans to manufacture wind turbines at its Hosur plant in Tamil Nadu, where it manufactures large electric motors and generators. The company intends to upgrade this factory to manufacture 2.1 MW wind turbines. China’s second largest wind turbine manufacturer, Envision Energy also intends to set up manufacturing facilities in India. The Sany Group, another Chinese conglomerate, has announced its plans to set up 2 GW of wind power capacity and manufacture turbines in India. Siemens Gamesa has set up a new factory at Nellore in Andhra Pradesh. Moreover, manufacturers are now moving towards the use of modular steel or steel and concrete hybrid towers to support the increasing hub heights and rotor diameters. The option of on-site manufacturing of towers is also being explored. As the country looks to set up large capacities, technological advancement is expected to play a pivotal role in achieving the specified targets over the next few years.