Balance of plant (BoP) refers to the supporting and auxiliary components integrated into a power generation system. In the context of solar plants, it refers to advanced switchyards, power transformers, transmission lines, switchgears, communication systems, converters and substations. Electrical balance of plant (EBoP) is crucial for plant efficiency and performance as it makes a huge difference in the cost of operations and, by extension, the levellised cost of energy (LCoE) and profitability of the venture. The EBoP market accounts for a significant share of the power equipment market. Growing dependence on cheaper imports has led to the production of equipment at about 70 per cent of the present capacities.

An overview of the key EBoP components and their market status…

The main components used in EBoP are transformers, switchgears, cables, communication systems, inverters or power conditioning units, wires, capacitors and cables. Broadly, the components used in power evacuation can be considered a part of the BoP as well. The additional components used are inverters and storage systems. A power transformer consists of a coil wrapped around an electromagnet that transfers electricity from one circuit to another, without changing the frequency of the electric energy. The transformers increase or reduce the voltage of the current passing through them as per the requirements. In the case of transmission systems, the main transmission lines are usually equipped with fibre optic cables, mostly integrated into the earth (optical ground wire cables) and the substations are accessible through broadband communication systems. Two proven and optimal communication technologies for application-specific needs are synchronous digital hierarchy and multiprotocol label switching-transport profile solutions.

Switchgears are a combination of components such as switches, fuses and circuit breakers that are used to control, protect and isolate an electrical equipment to enable continuous and reliable supply of electricity. Switchgears are available in low, medium and high voltage levels, based on their load-bearing capacity.

A solar inverter, or converter or photovoltaic (PV) inverter, converts the variable direct current output of a PV solar panel into a utility frequency alternating current that can be fed into a commercial electrical grid or used by a local, off-grid electrical network. Solar inverters may be classified into three broad types – stand-alone inverters, used in isolated systems; grid-tied inverters, which match the phase with a utility-supplied sine wave; and battery backup inverters, which are designed to draw energy from a battery and manage the battery charge via an on-board charger.

Solar cables interconnect solar panels and other electrical components of a PV system. These cables have to withstand a wide range of environmental challenges like high temperatures, ultraviolet radiation, rain, humidity, dirt and attacks by moss and microbes over a long period of time. Connectors provide secure and touch-proof connections between components. Like cables, PV connectors are also exposed to harsh weather conditions. Copper and aluminum conductors are used in fabricating connectors for solar projects. 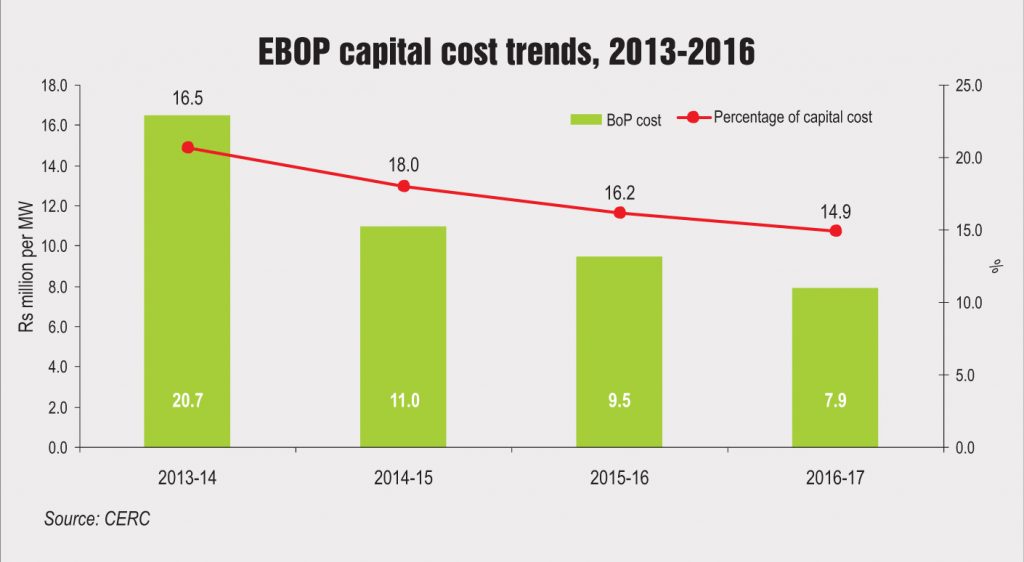 BoP components play a significant role in the efficiency of solar plant operations. For instance, switchgears help protect against overloads, short circuits and insulation failures. Switchgears are also used to enhance system availability by allowing more than one source to feed a load. Similarly, the deployment of low-quality solar cables leads to small increases in resistance and results in higher losses of energy, thereby negatively impacting the profitability of the project.

Solar power inverters have special functions adapted for use with PV arrays, including maximum power point tracking (MPPT) to get the maximum possible power from the PV array. The purpose of the MPPT system is to sample the output of cells and determine a resistance (load) to obtain maximum power for any given environmental conditions. This special function improves the efficiency of the solar cell, making it more cost effective. Transformer losses are also significant and impact the efficiency of solar plants. Further, the isolated location and decentralised system of renewable energy projects require an advanced communication system through which intelligent devices record energy supply and consumption data in real time and adjust the grid voltage automatically. Improvements in these technologies, coupled with real-time monitoring and response technology, can go a long way in increasing the cost effectiveness and efficiency of a solar plant.

Cost economics and the role of GST

EBoP components have witnessed a decline in costs over time. Further, their cost as a proportion of the total capital cost of a solar power plant has been showing a decreasing trend. This has been reflected in the trend exhibited by benchmark capital cost norms issued annually by the Central Electricity Regulatory Commission (CERC). The costs of EBoP systems – calculated by adding power conditioning unit costs and evacuation costs up to the interconnection point – have declined from Rs 16.5 million per MW in 2013-14 to Rs 7.9 million per MW in 2016-17. In percentage terms, this represents a cost reduction from 20.7 per cent to 14.9 per cent of the total capital cost. Hence, the CERC has declined to publish benchmark capital costs for solar plants for 2017-18 and onwards.

However, it must be noted that the current benchmark capital cost norms for solar PV power projects determined by the CERC do not include the cost of storage systems in capital costs. As the adoption of storage systems increases in the Indian market, they too will figure prominently in the cost analysis of solar plants. Prominent players in the EBoP market have already started providing battery energy storage systems as part of their solutions. For instance, Siemens provides a battery-based storage system as a part of its turnkey solution.

Another factor that can impact the EBoP market is the new goods and services tax (GST) regime, which is expected to come into effect from July 1, 2017. According to data released by the government, inverters and wires are included in the 18 per cent GST tax slab. The batteries used for storage systems may attract up to 28 per cent GST, driving up component costs. Moreover, non-creditability of GST would lead to a sudden increase in EBoP component costs. Further, the share of evacuation and inverter costs in the total capital cost of a solar plant may go up from the present combined cost of 14.9 per cent, as mandated by the CERC.

The major players in the end-to-end EBoP market are ABB, Siemens, Schneider Electric and GE. These companies provide turnkey and bespoke solutions specific to each plant. Their system integrates various components used in balance of plant like transformers, switchgears, inverters, storage systems, communication systems, cables, wires and switches. The segment also has many vendors supplying individual components. The inverter market has foreign players such as Hitachi, Mitsubishi and Emerson Electric, while the key domestic players are Su-Kam, Luminous and Microtek. The situation is broadly the same for cables, wires and switches. However, the storage systems market is dominated by foreign players, especially larger players like GE and ABB.

Despite its important role in solar power generation, the EBoP market faces some challenges. One of the main hurdles is the lack of a complete value chain in solar equipment manufacturing. The dearth of low-cost financing has prevented domestic players from setting up a strong manufacturing base. The new GST regime also imposes additional costs on both solar installations and solar manufacturing, impacting the EBoP market negatively.

However, the situation is far from bleak. The government has been making constant efforts in this regard through initiatives like Make in India, wherein renewable energy is among the 22 sectors that have been identified for promoting domestic manufacturing. Further, with a policy push towards increased solar power capacity installations and a target of 100 GW of solar power capacity by 2022, the market for EBoP systems is set to grow. Added to this, the Ujwal Discom Assurance Yojana has strong potential to strengthen the discoms, leading to an assured revenue flow for solar companies, enabling them to plan their capital investments with a reasonable degree of certainty. Falling prices, the growing market size and more certain market dynamics can promise EBoP solution providers excellent growth opportunities.