Solar trackers have emerged as a popular concept of late as they help in increasing the output of solar panels by 15-25 per cent, which, in turn, improves the economics of solar projects. Given the benefits, the demand for solar tracking solutions is on an upswing across all solar power markets. A number of players are now entering this space to provide such solutions, while a few have already gained a strong foothold. China-based Arctech Solar is one such player. The company, which was founded in 2009, has an annual production capacity of 3 GW of solar trackers and 6 GW of fixed structures. In terms of shipments, the company recently crossed a cumulative installed capacity of 10 GW globally. Of this, the highest supply was achieved in 2016, when Arctech shipped over 3 GW of trackers and structures worldwide. The highest number of installations have been done in China and India, where it is ranked as the top player in this space.

India has emerged as one of the biggest markets for Arctech, after China. The company shipped about 500 MW of solar trackers and 400 MW of fixed structures to India during 2016 alone.

Tapping the opportunity in India

From practically no tracker-based capacity two to three years ago, India now has more than 1,000 MW of solar power plants that use tracking solutions. This may be a small fraction of the 9 GW installed solar capacity in the country, but the use of trackers to improve plant efficiency has become more the norm than the exception now. According to industry reports, about 50 per cent of the upcoming solar capacity in the country will be based on solar tracking solutions. Given the increasing demand for these tracking solutions, Arctech is contemplating setting up a local manufacturing base in India. In terms of servicing capacity, it has tripled its office space over the past two years and is increasing its hiring aggressively.

The horizontal single-axis tracker with a redundant backup system and linked rows is the main technology that Arctech is promoting in India. The backup system can automatically be activated whenever the primary system stops, thereby helping prevent any generation loss.

The company has a strong research and development (R&D) base in China, which is currently working on developing more solutions to help developers reduce project costs and increase plant efficiency. It is also working towards customisation as per local conditions.

Besides India, Arctech has recently started focusing on the Japanese market as well and is customising its products to suit local conditions. Most of the conventional photovoltaic (PV) power stations in Japan use fixed mounting structures with an angle of 5 degrees to 20 degrees.

During blizzards, the snow invariably piles up on top of the modules. In heavy snow areas, it is hard to clean the modules and as a result, the PV power stations are not able to work normally, sometimes for several months in winter. To address this problem, Arctech Solar has customised its standard Arctracker Pro, which rotates at an angle ranging from 45 degrees to 45 degrees, and increased the maximum rotation angle to 65 degrees. This increased tilt allows the snow to fall off freely. While the opportunities are obvious, players including Arctech face certain challenges as well. Initially, the challenge in any new market is to convince developers to bear extra costs to achieve higher efficiency. In the Indian scenario, this challenge has been largely overcome as the case for solar tracking solutions has already been established. Another concern relates to the amount of land to be acquired for tracking solution-based plants compared to non-tracking solution plants. It takes about 5 acres of land per MW of installation to apply single-axis trackers. However, the installation time is similar to that of fixed structure plants.

Going forward, the company aims to expand into new markets, while increasing its foothold in the existing markets, especially China and India. R&D will continue to be a key focus area for the company, which is planning to release its new integrated product design in mid-2017. This is part of the company’s strategy to tackle the growing competition in the space. In India, the other players in the solar tracker space include dedicated tracker companies such as Scorpius Trackers, Smartrack and NEXTracker, and players like Mahindra Susten and Nuevosol Energy, which have recently entered this space by forging international tie-ups for tracking technologies. Given Arctech’s long-term experience in this field and strong R&D backup, it seems well placed to take on the competition. 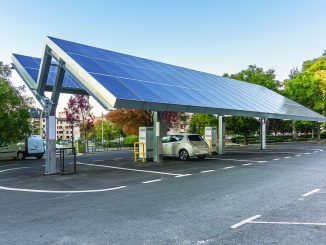