Karnataka’s pioneering status in the renewable energy sector goes back to 1902, when Asia’s first major hydroelectric power station was built at Shivanasamudra. The state has since achieved several firsts, especially in the past one year. It is developing a 2,000 MW solar park, the world’s largest, on 10,000 acres of arid land in Pavagada. It is also developing the country’s first solar off-site project, spread over 150 acres of land with an insalled capacity of 36 MW. While 6 MW of this has already been commissioned, 17 MW is at various stages of contract negotiation.

Much of the renewable energy growth in Karnataka has taken place over the past year. This has been driven by the creation of a favourable business environment focused on renewable energy development and the ambitious targets set by the central government. Karnataka has a target of 5,697 MW of solar capacity, 6,200 MW of wind power, 1,500 MW of small-hydro power (SHP) and 1,420 MW of biomass power.

The state has set the ball rolling by taking several policy initiatives. It has already issued its scheduling and forecasting policy, even as most other states grapple with power evacuation and curtailment issues. It has put in place a policy for converting waste to energy (WtE), one of the first states to create an active policy for this segment. The state government has signed an MoU with its Dutch counterpart for setting up a 7 MW WtE plant in Bengaluru.

Karnataka is one of the few states that has abundant availability of nearly every source of energy, from nuclear to conventional to renewable. It has been proactive in developing these sources to achieve its aim of providing electricity for all by 2020. The cumulative installed capacity in the state stood at 17,684.03 MW as of October 2016, second only to Tamil Nadu in the southern region. Of this, renewable sources account for 32 per cent of the capacity, while coal dominates with over 45 per cent, and nuclear, large hydro and diesel power make up the rest.

The state has an installed renewable energy capacity of 5,714.79 MW. Wind energy continued to remain the most developed of these sources with 3,146.64 MW of projects commissioned as of October 2016, followed by cogeneration at 1,267.05 MW and SHP at 838.46 MW. The commissioned solar capacity remained low at 328.62 MW. However, multi-megawatt of capacity has been auctioned under an upcoming solar park project as well as under the non-solar park category, which will translate into capacity installations over the next few years.

Despite the high potential, renewable energy development in the state has been slow, especially solar power. Karnataka has a significant wind energy potential of 55,857 MW, which, though more developed as compared to solar, still has a long way to go. The solar potential is nearly half that of wind and stands at 24,700 MW. The SHP potential stands at 4,141 MW, while that of biomass power and cogeneration is 1,000 MW and 2,000 MW respectively.

In 2015-16, Karnataka’s renewable sector witnessed a number of project auctions and allocations; however, actual capacity additions remained low. While 886.45 MW of wind capacity was allocated, only 230.9 MW was commissioned. Similarly, in the solar segment, the capacity addition was a dismal 50 MW against an allocation of 894 MW. On the other hand, in the SHP segment, 50.25 MW of capacity was added, which was more than half of the allotted capacity of 80 MW. 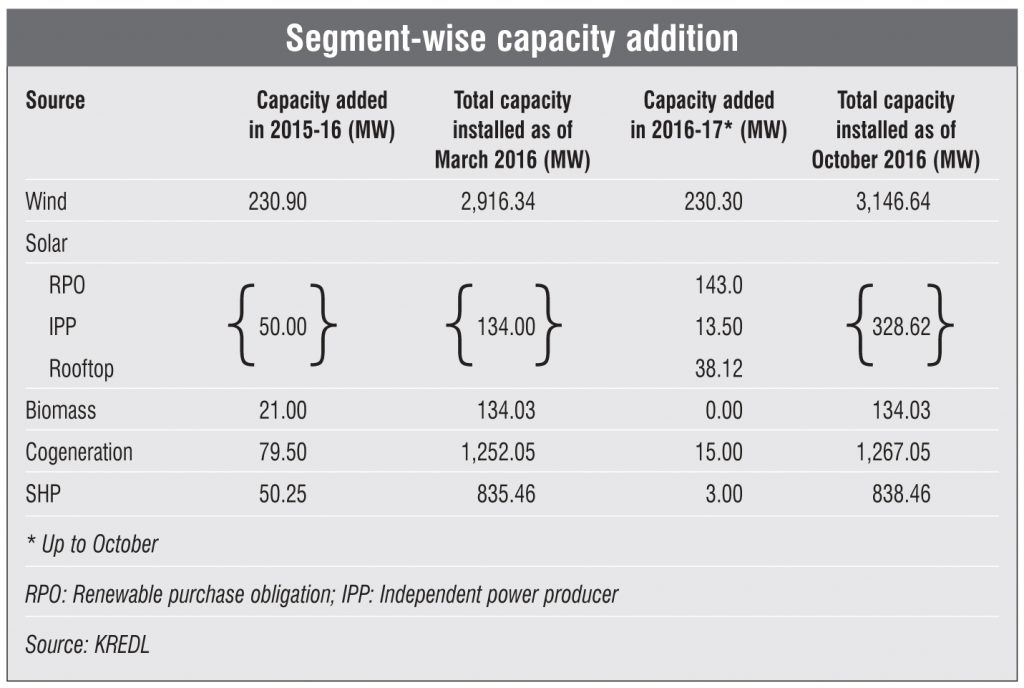 Karnataka has recently modified its solar policy in order to achieve the 6,000 MW by 2020 target set by the central government, against the earlier 2,000 MW. While project development continues to be guided by the old policy framework, the enhanced target has compelled the state to modify its policies. 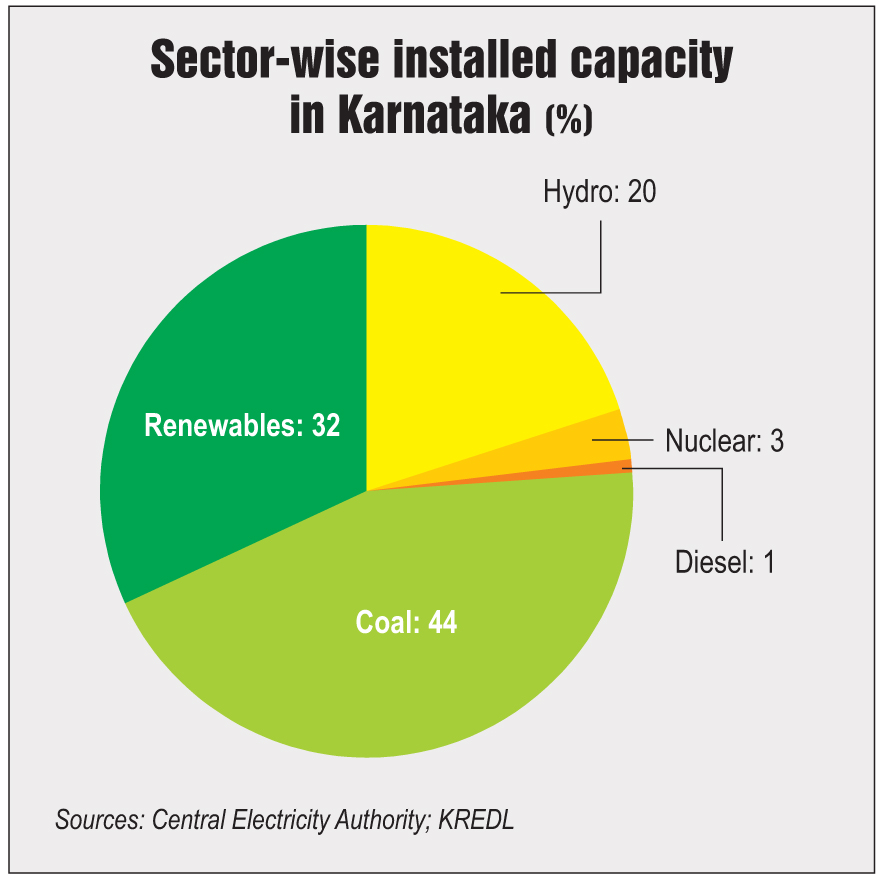 At the time of the introduction of the solar policy by the state, the tariff offered for solar PV power plants was Rs 6.51 per unit, while that for solar thermal plants was Rs 10.85 per unit. Similarly, high tariffs were provided for rooftop and small solar installations – Rs 9.56 per unit for projects without subsidy and Rs 7.20 per unit for projects with subsidy. In May 2016, however, the Karnataka Electricity Regulatory Commission (KERC) reduced the tariff for rooftop installations to Rs 7.08 per unit for projects without subsidy and with a capacity of up to 10 kW. The new rate is applicable to consumers signing power purchase agreements (PPAs) between May 2016 and March 2018. Due to the high tariffs, the state witnessed an unprecedented amount of solar capacity addition, which put enormous pressure on the already distressed treasuries of discoms. In light of the financial pressures, the government lowered the tariffs while still maintaining levels that would not completely discourage developers.

The tariffs discovered under competitive bidding for solar power projects were fairly high for Karnataka, although there has been a downward trend over the years due to falling module prices. In 2011, when the state launched Phase I of its solar policy with 60 MW of capacity on offer, a tariff of Rs 8.34 per unit was discovered. By 2014-15, when Karnataka entered Phase IV of its solar policy and with 500 MW under development, the tariff had declined to Rs 6.94 per unit.

In addition to lower tariffs, the policy amendment introduced gross metering for domestic consumers, hospitals and educational institutions. As opposed to net metering for commercial and industrial consumers, where the units paid for are calculated by subtracting the consumption from the supply, the electricity supply company will pay for the entire power uploaded to the grid.

For wind power projects, Karnataka Renewable Eenergy Development Limited (KREDL) provides a tariff of Rs 4.50 per unit of power generated. Compared to other states, this falls under the moderate-to-high category. With high wind energy potential in the state, the government will have to ensure reasonable tariffs in order to encourage the development of the wind energy segment. For cogeneration and biomass projects, the state offers high tariffs of about Rs 4.83 per kWh and Rs 5.15 per kWh respectively.

The increase in solar capacity addition in Karnataka has been made possible due to a combination of high tariffs, favourable regulatory measures and the government’s efforts to unclog the system to clear solar applications beyond the proposal stage.

Till June 2016, KREDL had approved about 1,170 MW of solar power capacity that had been auctioned in March 2016 as part of a 1.2 GW cluster. While other states struggled with project delays due to non-receipt of letters of approval from the respective agencies, Karnataka was able to clear the bureaucratic roadblock and deliver the letters before the signing of PPAs by the winners.

Given that the state’s solar and overall renewable energy targets are quite ambitious, the removal of bottlenecks will help boost the confidence of developers. Until recently, Karnataka was rather slow in developing its solar energy potential. The government has, therefore, taken steps in the proper direction to ensure that it does not lose any more time in tapping its solar potential.

Throwing the wind power segment off the progress track, KREDL has cancelled projects worth 5,064.15 MW. This has hit the pace of growth considerably and led to sceptics questioning Karnataka’s ability to meet its renewable energy targets.

The reasons for the cancellation, however, go beyond KREDL’s regulatory purview. While north Karnataka is the wind energy belt of the state, with places such as Hiriyur, Chitradurga, Belgavi and Davangere that are known to have the highest potential located here, most of the cancelled projects were to be set up in other regions that have nearly no wind power potential. Another reason for the cancellation was the unavailability of land for setting up wind power projects, which, as per conservative estimates, require 4-5 acres for setting up a 1 MW wind plant. The applications were either for setting up projects on agricultural land that is becoming increasingly expensive to acquire, or forest land that nearly always runs into bureaucratic hassles, making it difficult to get clearances. Some other reasons for the cancellations were logistical issues in reaching the wind power plants and installing transmission lines owing to the remote locations.

These cancellations could have a domino effect, with capacity additions failing to meet the targets next year. Coupled with the central government’s changing policies on wind such as a reduction in accelerated depreciation, these issues may further restrict the growth of the wind power segment.

Karnataka has the highest SHP capacity in the country, with a potential of 4,141.2 MW across 834 sites as designated by the Ministry of New and Renewable Energy. Only 20 per cent or 838.46 MW has been realised so far. The SHP target for the state for 2022 is to reach a cumulative capacity of 1,500 MW. With one of the better tariffs for the segment as compared to other states, at Rs 4.16 per kWh, levellised over 35 years of the project life, Karnataka seems well placed to achieve its SHP target.

Karnataka is stepping up its efforts to add renewable energy capacity and contribute to the country’s overall target. It is focusing, in particular, on developing its vast solar potential. The state has cleared the regulatory roadblocks for solar projects and created a favourable ecosystem for the growth of the segment. This is reflected in the significant capacity being added through solar parks being developed by the Solar Energy Corporation of India and KREDL.

While Karnataka has succeeded in harnessing much of its wind energy potential, the large-scale cancellation of several proposed projects has put a question mark on the achievement of the state’s targets. Hope hinges on the 30 GW of potential identified across the wind-rich locations of Bellary, Chitradurga, Chamarajanagar, parts of Kolar, Chikkaballapur, Hassan, Haveri, Gadag, Koppal and Bijapur. Overall, the outlook for Karnataka’s renewable energy sector remains positive. With the right policies in place, the sector is likely to witness strong growth and investments.