A large population of the country, mainly living in rural areas, still does not have proper access to electricity and is primarily dependent on traditional fuels such as kerosene, diesel and wood for lighting purposes. Due to its geographical position, India has access to abundant solar energy that can be tapped as an efficient source of electricity for areas that are yet to be grid connected. Off-grid solar lighting products have wide applications in residential, commercial and industrial areas. In addition, technological advancements have considerably reduced the capital cost of solar products, making them quite affordable and in many cases commercially attractive. Further, to achieve its target of 24×7 Power for All by 2019, the government is focusing on incentivising distributed solar power. While the segment continues to receive government funding through various schemes, many solar products are increasingly being sold on a commercial platform, financially backed by microfinance institutions, cooperative banks and venture capitalists.

The Ministry of New and Renewable Energy (MNRE) offers a wide range of subsidies, covering up to 40 per cent of the capital cost of off-grid and decentralised solar applications. Under the Off-grid Solar Applications Programme, the MNRE provides a 30 per cent subsidy on the cost of such systems. The subsidy ranges from Rs 21 per Wp to Rs 120 per Wp depending on the capacity of modules and configuration of PV systems. For LED-based systems, individuals can avail of a capital subsidy of 40 per cent limited to Rs 160 per Wp for systems up to 40 Wp, and Rs 100 per Wp for systems between 40 Wp and 300 Wp through the National Bank for Agriculture and Rural Development, regional rural banks (RRBs) and commercial banks. For PV plants with capacity between 300 Wp and 1 kWp, 30 per cent subsidy is available with a limit of Rs 45 per Wp. For the balance amount, RRBs and banks extend credit to consumers at commercial rates. Under the above programme, banks extended loans and directly disbursed subsidy for 108,000 solar lighting systems across 19 states during 2014-15. In value terms, the market for solar lighting was estimated at Rs 13 billion during the period.

Research and development in the area has brought several innovative products in the market. For example, the Department of Science and Technology in collaboration with the NB Institute for Rural Technology has developed a unique product called the micro solar dome (MSD), which will help light up households in urban slums and rural areas. The device has a semi-spherical upper dome made of acrylic that captures sunlight, which then passes through a tube having a thin layer of reflective coating on the inner wall. The device, which has been tested at various laboratories and institutions, is capable of working for a minimum of 17 hours during summer and 13 hours in winter.

The product has been tested on the ground as well by distributing this product in slums in Mumbai, Delhi, Guwahati and Kolkata. The MNRE has committed Rs 5 billion and is considering committing an additional Rs 5 billion for a two-year project for the installation of 10 million MSDs in shanties and slums that are poorly lit during the day. After calculating the subsidy, the device will be available at around Rs 1,200 per unit, which will further reduce if the government approves an additional subsidy. The Department of Science and Technology is in the process of shortlisting manufacturers from the 35 entities that responded to its invitation for expressions of interest. In October 2016, it organised a five-day national-level training programme with these prospective manufacturers. The product represents a huge business opportunity estimated at Rs 20 billion over the next two years. 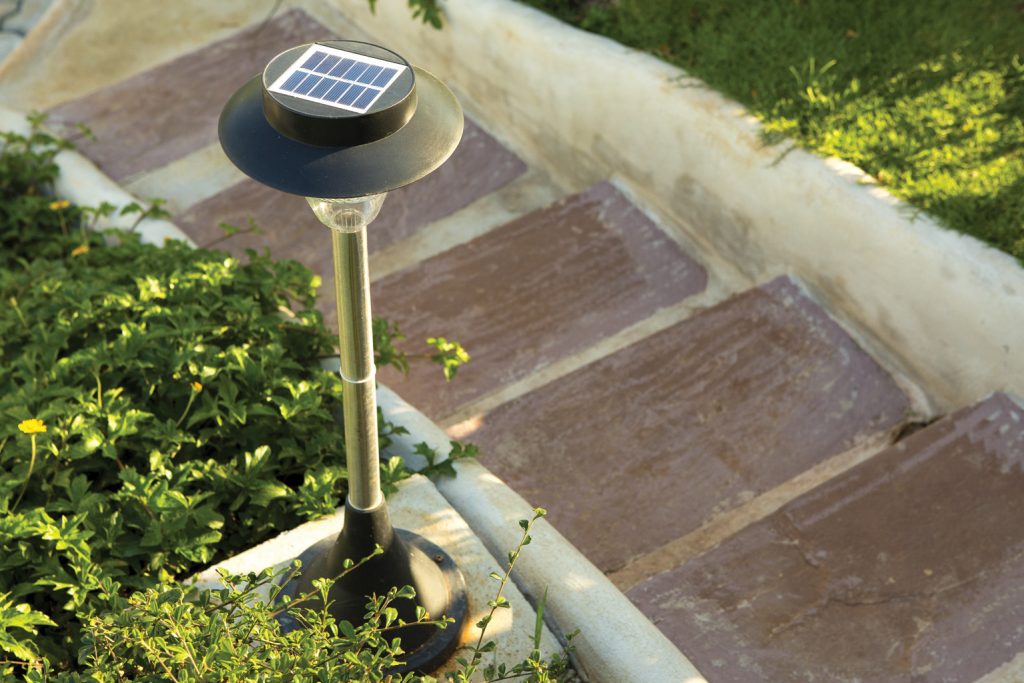 While various lighting products are effective and popular, solar microgrids have a wide scope of application and higher benefits for households vis-à-vis standalone lighting systems. For instance, microgrid technology has helped in lighting the 800-year-old Itchu village in the Kargil district of Jammu & Kashmir. The village, which is not accessible by road, has been electrified through six DC solar microgrids – three grids of 250 W and three of 100 W. The microgrids provide electricity to a total of 150 LED lights and six LED street lights in the village. Set up at a cost of Rs 1.2 million, the project was undertaken by the Global Himalayan Expedition (GHE) and the Kargil Rural Electrification Development Agency (KREDA) with financial assistance from Infosys. This technology can be extended to other villages in the Himalayan region of Kargil and Leh (Ladakh region), which still have no access to the grid. In fact, the GHE plans to implement more microgrid projects, with assistance from KREDA and corporate organisations, to provide light to all the villages of Kargil and Zanskar by 2017-18.

A commercially successful microgrid solution is offered by Simpa Networks, which provides SHS on a pay-as-you-go model. The company has received $11 million in financing from venture capitalists and institutions like the Asian Development Bank and the United States Agency for International Development. It has installed over 20,000 systems across several districts of Uttar Pradesh. Simpa has set itself a target of installing 1 million solar rooftop plants in rural India by 2019. Depending on the financing model, Simpa’s system costs between Rs 180 and Rs 950 per month. The model leads to ownership in 24-36 months while the system can operate continuously for up to 10 years with some basic maintenance.

Boond Engineering and Mera Gao Power (MGP) are also building microgrids in India on a commercial basis to provide electricity access for lighting and other basic needs. While each microgrid provided by Boond Engineering helps 40 to 200 families gain electricity access for lighting, fans, radio and TV, MGP designs microgrids that provide 12-24 families with two lights and the ability to charge a cell phone. The two companies recently won the first prize, a Euro 200,000 low-interest loan to build microgrids in India, in the Fraunhofer Institute for Solar Energy Systems and Solar for All contest held in Mumbai for innovative community solar electrification solutions. Germany-based crowdfunding company Bettervest GmbH will help raise the prize money for the winners, who will have to repay the amount at 6 per cent interest rate in eight years.

Solar power systems have the potential to provide electricity access to remote rural areas that are not connected to the grid. Given that two-thirds of India’s population still resides in rural areas, the market opportunity is immense. The wide-scale deployment of solar lighting systems, which are easy and quick to install, will help improve the productivity in rural areas while reduction in the usage of conventional fuels will provide health benefits. It will be more effective if the government spreads awareness about the benefits of solar power in addition to ensuring a favourable environment for private investors in the sector.