Riding on the back of the policy push by the government, coupled with technological and efficiency improvements, the renewable energy sector in India has witnessed tremendous growth and is poised to become cost competitive with conventional fossil fuels. With this, wind and solar energy will eventually become mainstream sources for meeting the energy needs of the country. The sector witnessed several interesting developments on the tariff front in the past year. Solar tariffs plummeted to reach record low levels, small-hydro tariffs witnessed a steady increase and wind tariffs saw minor fluctuations across the states.

Aggressive bidding in the solar sector

Solar tariffs have seen a sharp decline in the past six years. The tariffs have fallen by more than 50 per cent since 2010, touching a record low of Rs 4.34 per kWh this year. The lowest tariff bid quoted during the capacity allocation process under the Jawaharlal Nehru National Solar Mission (JNNSM) Phase I Batch I was Rs 10.95 per kWh in December 2010, while that during the Phase I Batch II allocation in December 2011 was Rs 7.49 per kWh. Since November 2015, tariffs below Rs 5 per kWh have become the new normal for the Indian solar industry. In January 2016, a tender for 420 MW solar capacity in Rajasthan saw the winning bids touching an extreme low of Rs 4.34 per kWh. The bid was quoted by Finnish company Fortum Energy for a 70 MW project. A similar trend of aggressive bidding was then followed by developers in Jharkhand, Karnataka and Maharashtra. Interestingly, the current tariffs are even lower than what was being offered under viability gap funding, wherein the tariffs declined to Rs 5.45 per kWh.

There are several reasons that contribute to the decline in bids quoted by developers. These include incentives offered by the government like ease in land procurement and transmission infrastructure under the solar park model, a sharp decline in solar module prices owing to lower polysilicon costs, increase in industry volumes, etc. Moreover, global companies such as Fortum, SoftBank and SunEdison are bidding aggressively to get a foothold in India’s high-growth renewable energy market.

There are concerns that a rapid fall in tariff prices due to aggressive bidding might affect the economic feasibility of projects, thereby jeopardising the prospects of the domestic solar industry. SunEdison’s bankruptcy after the company won 500 MW capacity in Andhra Pradesh at Rs 4.63 per kWh indicates its failure to analyse the risks of bidding aggressively. Another issue arising out of such instances of liquidity constraints is that banks become more cautious about funding projects offering low returns, which deteriorates the investment climate within the segment. However, only time will tell how effectively developers are able to manage their profit margins and deliver solar power at such low tariffs in the future. 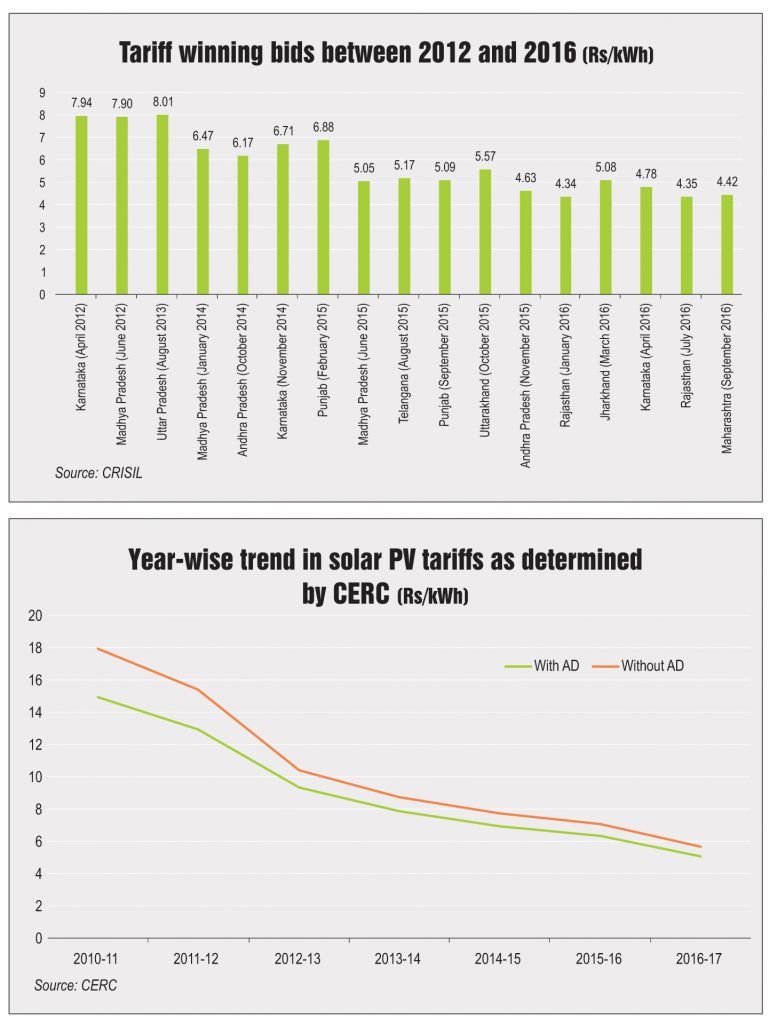 Uncertainty for the wind segment

Unlike the solar segment, tariffs determined by the state electricity regulatory commissions (SERCs) for wind power have hovered around the same level except in some states. The SERCs in Andhra Pradesh and Tamil Nadu increased the preferential feed-in-tariffs (FiTs) by 0.2 per cent and 18.5 per cent respectively. The current tariff in Andhra Pradesh is Rs 4.84 per unit and in Tamil Nadu it is Rs 4.16 per unit. Amongst the key windy states in India, Madhya Pradesh and Maharashtra have witnessed a decline in FiTs for wind. Madhya Pradesh has seen a decline in wind tariff from Rs 5.90 per unit in 2015-16 to Rs 4.80 per unit this year. The downward revision is due to the normative plant load factor assumption of 23 per cent from 20 per cent, coupled with the fall in normative capital cost assumption from Rs 59.6 million per MW to Rs 57.5 million per MW. In Maharashtra, the wind tariffs were reduced marginally from Rs 5.70 per unit to Rs 5.55 per unit. Since these two states accounted for about 35 to 40 per cent of the incremental capacity addition in the past two years, the reduction in tariffs and slowdown in the signing of fresh power purchase agreements in these states are likely to impact wind energy capacity addition in the country.

In Gujarat, the wind FiT has been proposed as Rs 4.19 per kWh, indicating a marginal increase from the previous tariff of Rs 4.15 per kWh. Rajasthan too has proposed a slightly increased wind tariff of Rs 5.76 per kWh for wind power projects located in Jaisalmer, Jodhpur and Barmer, and Rs 6.04 per kWh for the remaining projects. 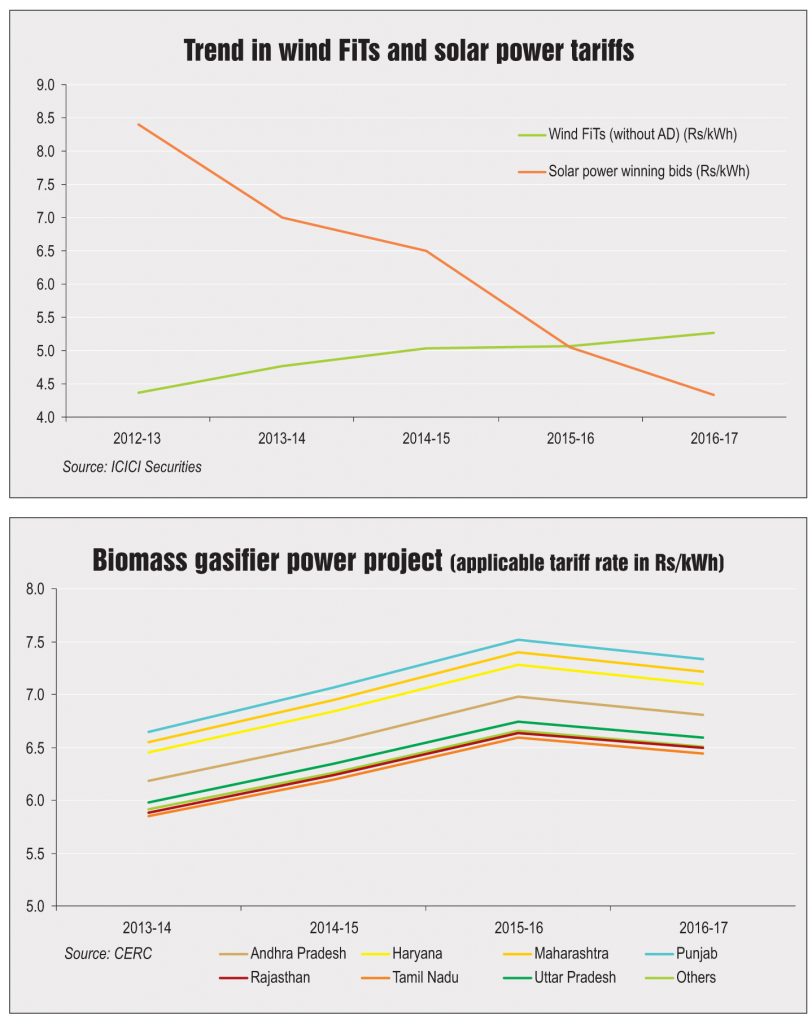 The FiT system is likely to be phased out with government indications to include SHP projects under the ambit of competitive bidding. Although developers will get a chance to include all parameters while determining tariffs, they have expressed reservations over the new process citing the possibility of the government capping the upper benchmark for tariffs.

The CERC notifies the normative tariff guidelines for biomass power every fiscal. However, these guidelines are only indicative as the states are not mandated to adopt them. Only a few states such as Haryana, Punjab, Maharashtra and Rajasthan have been notifying tariffs every year. There is a wide variation in the tariffs being offered for biomass power plants in different states. The applicable tariff rate for biomass gasifier power projects (as determined by the CERC) declined in Uttar Pradesh, Maharashtra, Andhra Pradesh and Tamil Nadu, the states leading the pack in establishing biomass-based power supply.

The fall in tariffs is a step forward to meet the ambitious targets set by the government, which aims to provide green power at less than Rs 4.50 per unit. Moreover, as renewable energy technologies are beginning to be covered under the ambit of competitive bidding, green power is expected to gain cost competitiveness, thus paving the way for long-term sustainability.