The small-hydro power (SHP) industry has experienced limited growth over the past one year, but a strong debate over a proposal by the government has brought the segment into the limelight. The government is mulling over bringing large hydropower projects, of over 25 MW capacity, under the ambit of renewable energy, merging it with SHP projects of less than 25 MW capacity that do not require the construction of a dam.

The SHP segment has been continuously underperforming, missing or barely making good on its targets over the past few years. Investor interest in the sector has dampened due to high investments, low tariffs and low returns because of insufficient rains, which restrict power generation and hence, revenues. With an

estimated potential of 20,000 MW, the industry has been less than developed with only 4,323.5 MW of installed capacity so far across 1,075 sites. As compared to other sources of renewable energy with much higher targets, SHP has been struggling to meet its allocated target of 250 MW in 2016-17.

The launch of the National Mission on Small Hydro by the Ministry of New and Renewable Energy (MNRE) last year failed to attract many takers for SHP projects. Even though the mission aims at reviving the sector through increased budgets, and research and development, falling tariffs and increasing costs have created an unfavourable environment for its progress.

As of September 2016, the country’s cumulative installed capacity of SHP stood at 4,323.35 MW, with 49.4 MW added in the current financial year, between April and September 2016. Currently, 24 of the 29 states have policies in place to promote SHP, but most of them lack the potential for SHP development. 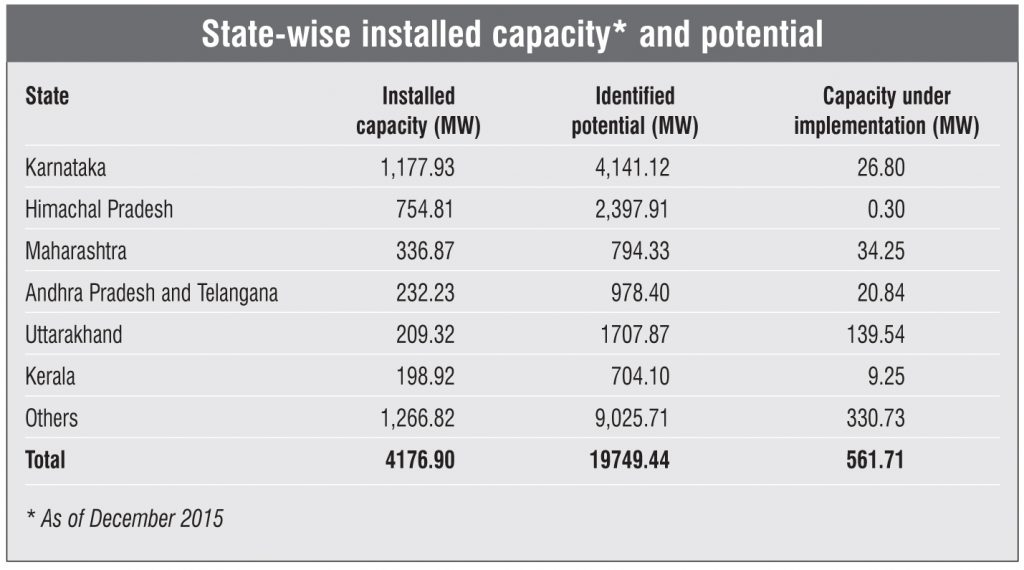 With an aim to revive investor interest in this space, the government is in the process of making a few policy changes. Recently, it floated a draft policy to generate interest among developers through the process of competitive tariff bidding for the allocation of SHP projects.

Water is a state subject and therefore requires state approval for the tariff structure in the sector. The fixed tariffs have been dwindling, leaving developers in a difficult situation with low returns. With competitive tariff bidding, developers are expected to give their own tariff rates to win contracts. However, according to developers, the state administrations could possibly cap the tariffs, which would make the exercise redundant. Jharkhand recently released a request for proposal for project allocation through competitive bidding for 13 plants with a total capacity of 125.2 MW. This marked a sharp deviation from the usual tendering process.

The government has proposed to change its definition of renewable sources of energy to include large hydropower projects, besides SHP projects. The proposal, which is at initial stages of discussion, was floated in January 2016 and has found both proponents and opponents in the industry. On the one hand, it is being seen as a boon for the hydropower sector as it would immediately provide financial benefits to the highly cost-intensive projects. On the other, the opposing faction, comprising mostly environmentalists, argues that hydropower plants are not net zero-carbon projects as they require the construction of dams, which is a carbon-intensive process.

The government’s ambitious renewable energy target of 175 GW by 2022 is being seen as the main driver for the inclusion of large hydropower projects. As of Dec-ember 2015, 42.75 GW of large hydropower capacity was installed as compared to only 38.82 GW of renewable power capacity. Including large hydro under the ambit of renewable energy would dramatically increase the installed renewable energy capacity and bring the country closer to achieving its targets. Given that India has also ratified the Paris Agreement, its responsibility to meet the targets to reduce its dependence on fossil fuels increases.

Despite actual power generation not emitting any greenhouse gases, experts are of the opinion that large hydropower projects do not have the benefits that define renewable sources of energy. Since dams have to be constructed for electricity generation, the process is harmful to the ecosystem. In addition, marine life and water supply to farmlands are adversely affected. Since the projects are capital intensive, the budget allocated for other renewable sources could be diverted to fund hydropower projects. These factors together contribute to the vulnerability of climate change, working against the very essence of renewable energy.

The restricted growth of SHP can be attributed to multiple issues. While some of the challenges are technical, most are policy-based problems that need to be resolved at the state and central levels. The gestation period for SHP projects is much higher than that of its counterparts. Although actual plant construction takes only around two years, it takes about four to eight years to develop an SHP project, most of which is spent in getting clearances from various bureaucratic agencies starting from the centre to the state and local authorities. This discourages developers from entering the segment. Uncertainties related to rainfall and the lack of proper weather forecasts have constrained the growth of the SHP segment.

Power evacuation is another concern among developers who often incur losses due to the unavailability of the grid network for power transmission. To this end, SHP project owners are often asked to curtail generation, resulting in revenue loss and suboptimal usage of the plant. A common issue faced across all new renewable installations will be resolved with the power grid being expanded to accommodate the upcoming renewable energy capacity to achieve the 2022 target.

SHP tariffs have been steadily decreasing with most states offering less than Rs 5 per kWh, while the centre provides between Rs 4.69 kWh and Rs 5.54 kWh. Of all the states with tariff policies in place for SHP, Karnataka has one of the highest tariffs, Rs 4.45 per kWh to Rs 5.25 per kWh. Given that the state has the highest SHP potential, the relatively high tariffs have resulted in considerable growth. However, Maharashtra has the widest range of tariffs for different capacities, ranging from Rs 5.75 for less than 500 kW of capacity to Rs 4.08 for capacity of 5-25 MW. It also has the highest tariff among all states, resulting in high SHP adoption in the state.

The government’s proposal to bring in tariff-based competitive bidding for SHP projects is expected to considerably increase the momentum in the segment. It is in the process of finalising the norms for its implementation. This process could help eliminate the challenges associated with the segment, as it would encourage developers to provide their own tariffs to win projects.

With the government’s proposal to merge small and large hydro projects, the SHP segment may cease to exist as a separate entity in the near future. In that case, the targets would change and so would the policies governing SHP projects, which could lead to renewed interest in projects with capacity of less than 25 MW. Further, the future of competitive bidding seems uncertain, as it has not found much appreciation among developers. However, since the results of the first tender are yet to be seen, it cannot be completely written off. For the SHP segment to take off, reform policies under the National Mission on Small Hydro need to be introduced to push up tariffs and generate returns for developers.