With the government’s ambitious target of achieving 60 GW of installed wind energy capacity by 2022, it has realised the need for regulatory reforms in the segment to encourage investors. The past year witnessed policy developments that aimed to improve the segment’s performance. These included the reintroduction of accelerated depreciation (AD), resulting in record growth, thereby instilling confidence in meeting the government’s renewable energy targets.

Along with the high growth came policy developments for the next year, which are expected to carry the momentum forward. The National Institute of Wind Energy’s (NIWE) reassessment of the wind energy potential at higher hub heights has opened up the repowering market with the government’s policy introduction on the subject. However, feed-in tariffs (FiTs) remained low, much to the disappointment of developers. The government intends to bring wind energy under the purview of competitive bidding, following the solar model. The industry remained concerned over this and the issue of grid availability, especially with increased targets and record capacity additions.

Renewable Watch takes a closer look at the developments over the past year, the emerging trends and the future of the wind energy segment in India…

The wind energy segment recorded the highest installations ever in the past two decades, an increase of 3,415 MW in 2015-16 to reach a cumulative capacity of over 27 GW. The capacity addition grew by nearly 48 per cent as compared to 2,308 MW in 2014-15. Supported by the policy changes in the previous year that saw the reintroduction of two mechanisms, generation-based incentives (GBIs) and AD, the segment delivered exemplary performance. The wind industry surpassed its allocated target of 2,400 MW by over 1,000 MW. As of September 2016, 1,305.5 MW of wind capacity was added to bring the cumulative capacity to just over 28 GW.

The segment’s performance has greatly improved as compared to the past two years, surpassing the installations in 2011-12, which was considered as the best year so far with 3,197 MW of capacity addition, when similar GBI and AD support was available. The withdrawal of the support in the subsequent year resulted in the dismal performance of the segment.

The issue of delayed payments is carried over to this year as well with nearly Rs 50 billion still unpaid by the state discoms collectively. Of these, Rajasthan has disbursed payments of about Rs 5 billion to wind generators only in August, bringing the delay down from a year to eight months, whereas Maharashtra and Tamil Nadu have been defaulting since January. The lack of interest among state discoms can be attributed to policy developments pertaining to the GBI and AD schemes during the year. 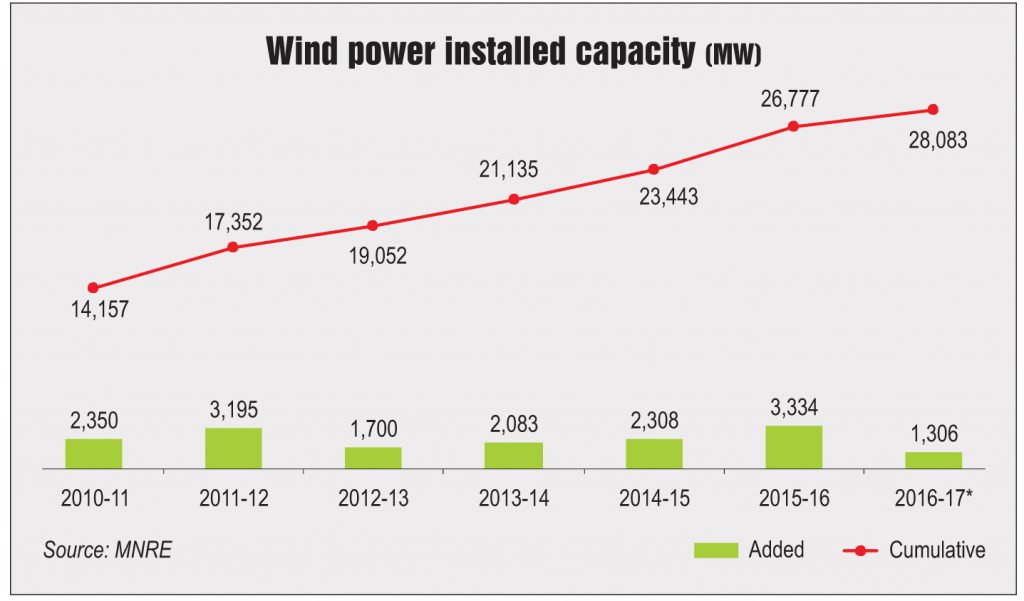 The Gujarat Electricity Regulatory Commission (GERC) proposed to share the GBI received on wind turbines with discoms and consumers. The central government provides GBI of Re 0.50 per kWh of power generated from the wind turbine to facilitate the cost recovery for developers as well as to promote technology adoption. GERC’s proposal of sharing this incentive has been met with much protest from the industry. Sharing GBI will lower the rate of return for the developers who are already reeling under the impact of the low FiTs fixed by states. GERC’s proposal, if implemented across states, could significantly mar the momentum built this year and the wind industry may fall short of its allocated 2022 target. Moreover, sharing GBI will only add to the negative consequences of the issues plaguing the segment, such as delayed payments and falling tariffs.

In a semi-reversal of the policy on AD by the government last year, it has been capped at 40 per cent instead of the prevailing 80 per cent. Announced in the Union Budget for 2016-17, this policy will come into effect from April 2017. The reintroduction of AD in 2015 was one of the major reasons for the explosive growth experienced this year. Given that the wind energy industry views the AD benefit as one of the key growth drivers, the move could result in significant reduction of the already waning investor interest.

Based on its performance in 2015-16, the industry expects the government to reconsider its decision on AD until the target of 60 GW wind power capacity is achieved. Although the wind power industry has seen a gradual decrease in equipment costs, it has not experienced the drastic cost reduction as in the case of solar. However, the tariffs have fallen faster, thereby evoking negative sentiments in the industry that can be offset only by support mechanisms. In the absence of monetary incentives, the wind energy segment could witness a considerable fall in the near future.

In 2015-16, the government notified a reverse auction scheme for wind projects with capacity upwards of 1 GW. The proposal has since received negative feedback due to growing concerns over low returns on wind projects. So far, players have tirelessly resisted the implementation of this policy, but the government has become more persistent in its efforts to bring it in.

Reverse auction involves bidding on projects by developers, with the lowest bid winning the contract. Competitive bidding has so far been successful in the solar industry; however, the composition of the solar and wind industries is quite different for the model to be equally successful. While the equipment costs for solar have been rapidly falling, the reduction in equipment costs for wind  has been rather sluggish. Low tariffs would, therefore, result in lower returns. The fixed FiTs from states have already hit a considerable low and competitive bidding would only further lower these tariffs.

A possible argument made in favour of competitive bidding could be that the general sentiment among developers would be to keep the tariffs up and a possible low bid would be only for a fraction of the auctioned capacity. Given this scenario, reverse auctions could bring in healthy competition among wind power players that may follow the growth pattern similar to solar.

However, unlike solar modules that can be installed on rooftops, open fields and any place with minimum insolation, wind projects need to conduct detailed assessment studies with historical wind data, before the project is developed to assess its economic feasibility. Lower tariffs and returns could be detrimental to the rigorous and costly data gathering exercise as it would encourage cost cutting by developers to expand the profit margin.

Last year, the NIWE released a reassessment report of the country’s wind potential at hub heights of 100 metres. According to this study, India now has a potentially exploitable 302 GW of wind energy. Based on this reassessment, the government has come up with a repowering policy that enables owners to replace obsolete wind turbines with the latest technology.

Most of the wind projects in India developed earlier are at 30-40 metre hub heights and low on capacity. Low hub heights resulted in inefficient power generation from these turbines. With technological advancements, higher hub heights have made more efficient wind turbines possible. The government has introduced a policy that will incentivise the replacement of wind turbines with capacity less than 1 MW. The repowering projects will enjoy all benefits provided to new wind power installations, along with a 0.25 per cent interest rebate given by the Indian Renewable Energy Development Agency. However, the industry has expressed its concern over the provision of such a low interest rebate.

The first-mover states of the Indian wind industry such as Tamil Nadu, Maharashtra and Gujarat are teeming with ageing wind turbines that were installed during the early stages. Nearly 10 GW of capacity installed has sub-100 metre hub heights and capacity between 225 kW and 1,000 kW. Of this, about 3.4 GW of capacity in high wind potential states is obsolete and eligible for repowering. As a result, the power generation from new turbines will be higher. In addition, repowering will assist these states in meeting their renewable purchase obligation targets, as well as the country to achieve the 60 GW installed wind capacity target. Moreover, the cost for repowering will be lower than for new installations as the infrastructure and maintenance are already in place. However, since the earlier projects were of low hub heights and smaller sizes, micro-siting will have to be done before repowering.

The government introduced the Offshore Wind Energy Policy in September 2015, which has now opened up the country’s coastline for harnessing the offshore wind power potential. To this end, the Indian Wind Turbine Manufacturers Association has signed an MoU with Germany’s National Institute of Wind Energy to develop India’s first offshore wind farm. With this, India will join the ranks of countries such as the UK, Germany, Denmark and China, which have high offshore wind installed capacity.

The consolidation pattern in the wind industry strengthened in 2015-16. Falling returns have forced many companies to opt out of projects by way of mergers and acquisitions. Independent power producers, taking advantage of such companies, have now acquired a larger market share of the installed capacity.

In December 2015, Inox Wind Infrastructure Services completed the acquisition of Sarayu Wind Power Private Limited for an undisclosed amount. The deal gave Inox access to the land owned by Sarayu on which about 18 MW of wind power can be installed. In addition, Inox acquired Vinirrmaa Energy Generation Private Limited in January 2016. Indo Rama Renewables Jath Limited was acquired by Tata Power Renewable Energy Limited, which has added 30 MW of wind power capacity to the latter’s portfolio. Tata Power acquired Welspun Renewables, adding the latter’s 685 MW of operational wind and solar capacity as well as 557 MW under construction to its own portfolio.

The rapid increase in installed renewable energy capacity has put  great pressure on the country’s underdeveloped grid infrastructure. With record wind capacity additions this year, this pressure has only increased, leading to curtailment of power generated from the turbines. Madhya Pradesh has asked power producers to reduce generation by about 50 per cent, while Rajasthan has asked for 40 per cent reduction and Tamil Nadu wants about 20-30 per cent power curtailment.

As a result, developers only stand to lose money due to poor grid availability and power evacuation issues as the machines would have to run at lower efficiencies. The purpose of installed capacity addition is defeated if the power does not reach consumers, resulting in waning investor interest. In tandem with reducing tariffs, removal or reduction of subsidies and support schemes such as AD and GBI, the issue of grid availability will harm the government’s plans of achieving its targets.

Based on the last year’s performance, the target for the wind power segment has been set at 4 GW for 2016-17. With recent policy developments such as reduced AD and the possible introduction of reverse auction, the future of the wind industry in the country remains uncertain.

At the same time, the repowering policy should provide a strong boost to capacity addition. In order to help developers, the government will have to create support mechanisms that can offset the impact of competitive bidding for a segment that is already struggling with low tariffs. At the same time, state agencies will have to tighten the money disbursement process to force discoms to clear the backlog of payments. Further, grid unavailability will have to be addressed by the government to keep investor interest alive in renewable energy projects, especially wind and solar, and to avoid curtailment. The repowering and offshore wind policies have certainly expanded the horizons for developers; however, policies will have to be aligned with their financial interests to achieve the allocated installed capacity targets.