Launched in 2010, the Jawaharlal Nehru National Solar Mission (JNNSM) has come a long way in terms of its scope, targets and achievements. Within five years of its announcement, the scope of the project has increased to promote all types of solar power projects, while the targets have been scaled up significantly, from 20,000 MW by 2022 to a new target of 100 GW by 2022. With an eye on the new target, the government is focusing on well-tested mechanisms like capacity bundling through various schemes and viability gap funding (VGF). During Phase I, bundling schemes helped in a significant reduction in solar tariffs, which helped expansion of the domestic solar market significantly, and in increasing investor confidence and attracting foreign investment in the solar market. The potential of the VGF scheme has also been tested during Batch I Phase II, where it not only helped in reducing solar tariffs but also in increasing the participation of independent power producers (IPPs). As pure-play developers, solar IPPs cannot avail of tax incentives through accelerated depreciation (AD), and separating such tariffs provided them with a level playing field, resulting in greater participation.

Of these two mechanisms, the government is focusing more on the VGF scheme to attract a variety of investors. After announcing Batches I, III and V of Phase II, the government announced Batch IV of Phase II with a target of setting up 5,000 MW grid-connected solar capacity under the VGF scheme in early 2016. The scheme will be implemented by the Solar Energy Corporation of India (SECI) and envisages developers to set up solar power projects on a build-own-operate (BOO) basis. The solar power produced will be sold to discoms or state utilities or bulk consumers at a predefined tariff of Rs 5 per kWh or less, as determined by the Ministry of New and Renewable Energy (MNRE), based on the prevailing market conditions, with a trading margin of Re 0.07 per kWh set by SECI. New projects can be developed in solar parks and at other locations. The entire capacity of Batch IV will be offered through four bids of equal capacity during 2015-16, 2016-17, 2017-18 and 2018-19. The upper limit for VGF for the domestic content requirement (DCR) category is Rs 12.5 million per MW and Rs 10 million per MW for the open category.

While the period from November 2015 to October 2016 was of announcements of various schemes and tenders, in terms of capacity addition, the achievement was limited. As per the latest details by SECI, a total 1,500 MW solar capacity has been installed under the JNNSM – about 821 MW under Phase I and 680 MW under Batch I of Phase II. Of this, only 30 MW capacity was added during the period between November 2015 to October 2016. This can be mainly attributed to the delay in awarding contracts by SECI. Of the three tenders of Batch III of Phase II announced in early or mid-2015 by SECI, none have yet been awarded fully. Of the 500 MW Maharashtra and 250 MW Gujarat tenders, 75 MW capacity (to be awarded under DCR – 50 MW in the Maharashtra and 25 MW in Gujarat) is still under tendering process. The third tender of 440 MW capacities in Uttar Pradesh had been offered again with a reduced capacity of 315 MW under Batch IV. The remaining capacity of Maharashtra tender and the entire Gujarat tender have been shifted to Batch IV. However, NTPC has awarded 2,750 MW solar capacity that it offered under the 3,000 MW state-specific bundling scheme of Batch II Phase II Tranche I during 2015.

As per the data tracked by Renewable Watch during the past one year (November 2015 to October 2016), a total 7,410 MW of solar capacity was either tendered out or awarded under Batches II, III and IV of Phase II. Of this, 1,125 MW capacity was offered under DCR category and the rest under open category. As of October 2016, about 56 per cent or 4,175 MW of the total capacity had been awarded, including 650 MW under the DCR and 3,525 MW under the open category. The 7,660 MW includes 3,525 MW capacity offered during the period of November 2015 to October 2016 under various requests for proposal (RfPs), of which 15 per cent capacity had already been awarded.

Owing to rising competition and government support for these projects, solar power tariffs last year reached a new lowest level of Rs 4.41 per kWh (with no VGF support), offered by Bhageria Industries during the 450 MW Maharashtra tender offered by SECI under Batch III. During 2014-15, the average solar tariffs discovered during bids in Andhra Pradesh (500 MW), Telangana (500 MW) and Karnataka (500 MW) were in the range of Rs 6.50–Rs 7 per kWh, which declined significantly to Rs 4.41–Rs 5.60 per kWh during the past one and a half years. The drastic cost reduction comes on the back of significant photovoltaic capacity addition in China and a sharp fall in polysilicon prices. However, as per industry experts, this sharp reduction in solar tariffs is creating distortions in the market, and preventing large and experienced players from expanding their footprint at the pace projected earlier.

Under the Make in India initiative, the government is focusing on the expansion of the domestic manufacturing base and thus gradually increasing the share of capacity offered with DCR. During November 2015 to October 2016, this share was around 15 per cent of the total capacity tendered or awarded. India is likely to announce its modified DCR under which modules used will need to be assembled in India, but the cells may be imported. This is a departure from the existing DCR rules where both cells and modules are required to be manufactured in India.

Initiatives are also being taken to promote solar rooftop projects. In May 2016, SECI announced a 500 MW solar rooftop tender with an aim to award projects under the renewable energy service company (resco) and capex models across states. Under the capex model, the bidder enters into an agreement with the rooftop owner at the quoted project cost as per RfPs for the scope of work. Under the RESCO model, bidders pay rent for the roofs on which they set up projects as per mutually agreed terms and conditions including lease agreement from the rooftop owner(s) and enters into the PPA with the rooftop owner or discom or other parties for the supply of solar power for 25 years. Successful bidders would be eligible to receive subsidy at 15 per cent of the lowest project cost quoted or Rs 12 per watt peak (Wp) (whichever is lower). SECI had set the maximum project cost that could be quoted by a bidder at Rs 90 per Wp. Further, the size of each project to be developed was in the range of 10 kWp to 500 kWp for commercial and industrial sector consumers. However, for the residential sector, projects with a capacity below 10 kWp could also be developed.

As per the latest update by SECI, a total of 132 bidders have participated in the tender with a cumulative capacity exceeding 600 MW. Of these, bids for 233 MWp capacity have been submitted by 88 micro, small and medium enterprises (MSMEs) under Part C (capex model), for 255 MWp by 55 participants under Part A (capex model) and for 105 MWp by 15 participants under Part B (resco model). For this tender, the opex category has been undersubscribed due to the limited appetite of developers for offering opex model to residential and institutional customers. While there are many large bidders on the list, prominent rooftop solar companies such as Tata Power Solar, Su-Kam, Chemtrols, Vikram Solar and Thermax did not participate in the tender. The most likely reason for this is that the tender conditions are somewhat onerous, particularly the requirement to complete projects within one year of subsidy grant, especially as subsidy is available in parallel through state nodal agencies without tendering.

As per industry experts, though the tender has been oversubscribed, the actual installed solar capacity would be much smaller due to the struggle many developers are likely to face while providing the necessary bank guarantees. The success rate of the past subsidy-based tenders from SECI has been around 70 per cent. 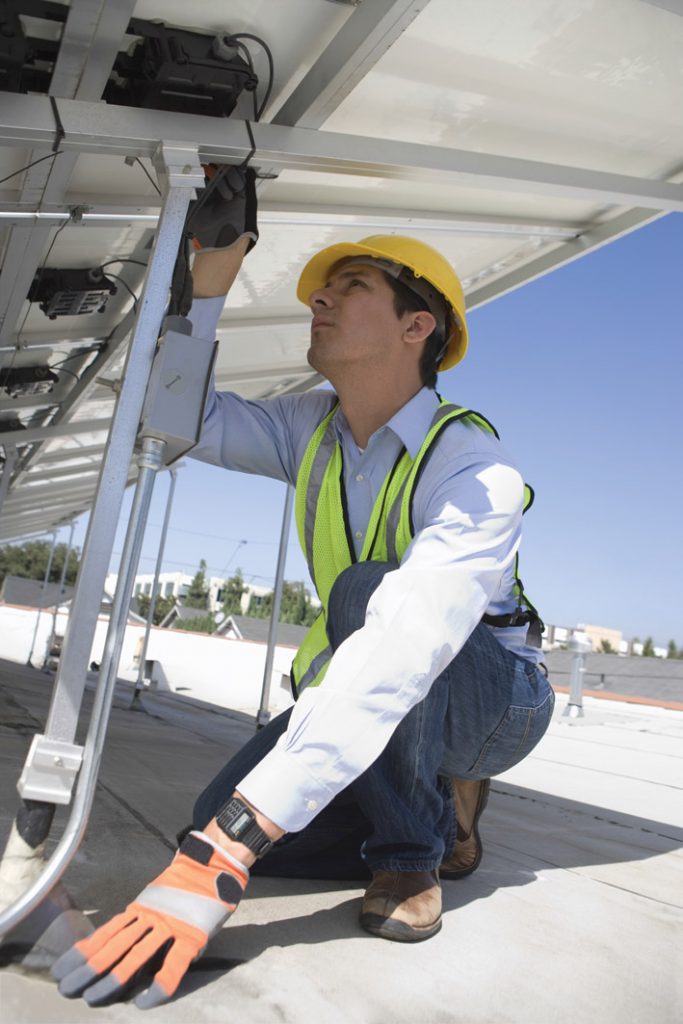 The MNRE is also shifting its focus to solar parks and ultra-mega solar power projects, to set up large-size solar projects in order to bring down the cost. In 2015, a scheme was approved for developing 25 solar power parks and UMPPs from 2014-15 to 2018-19. In February 2016, the MNRE published the guidelines for setting up solar parks, under which it has offered a grant of either Rs 2 million per MW or 30 per cent of the project cost. In addition, a central financial assistance (CFA) grant of Rs 2.5 million per MW will be released by the MNRE on the preparation of a detailed project report (DPR) of the solar park. The guidelines also allow setting up of various hybrid projects in the parks, wherever feasible, and UMPPs of over 500 MW capacity each. An amount of Rs 40.5 billion has been set aside for this, which will be made available to solar park implementation agencies as CFA.

All this capacity will be added under Batches II, III, IV and V of Phase II. Among the most significant schemes announced by the MNRE under JNNSM Phase II is the implementation of 15,000 MW grid-connected solar PV projects through NTPC in three tranches, which makes up Batch II of Phase II. Of this, 3,000 MW will be offered under bundling schemes, 5,000 MW with government support and the rest without government support. NTPC has awarded 3,000 MW under bundling schemes to various developers. In addition, Batches III, IV and V include a capacity addition of 2,000 MW, 5,000 MW and 1,000 MW, respectively, under the VGF scheme.

In December 2014, the Union cabinet also gave its approval for setting up over 300 MW of grid-connected and off-grid solar PV projects by defence organisations under the Ministry of Defence and Para Military Force VGF Scheme of JNNSM Batches II and III. These will be implemented in five years, during 2014 to 2019. Out of this, 150 MW had been allocated to the Ordnance Factory Board under the Ministry of Defence, as of June 2016.

The aforementioned developments, along with rising government support, have a potential to improve the investor sentiment further. However, appropriate measures are necessary to ensure quality and timely completion of these projects, especially for developers bidding aggressively. In addition, it is also crucial to expand the transmission network, improve the financial health of discoms, make low-cost financing available and create a stable policy framework.