The success that the Indian renewable energy industry has hitherto achieved is due, in part, to the policy support provided by the government as well as a favourable regulatory regime at centre and the state levels. From announcing huge targets for the sector to putting in place an enabling framework, the government has played a significant role in the sector’s growth. The past year, particularly, witnessed some key policy and regulatory moves that are further likely to aid this growth.

The government’s commitment to developing the country’s renewable energy sector was made clear with the ratification of the Paris Climate Agreement in October 2016. Earlier, India had submitted to the United Nations Framework Convention on Climate Change its Intended Nationally Determined Contribution. The country has committed to achieve 40 per cent of the cumulative electric power capacity from non-fossil fuel-based energy resources by 2030. This will be done with the help of technology transfers and low-cost international financing, including the Green Climate Fund. The first step towards achieving this has already been taken in the form of scaled-up renewable energy targets. The government is now preparing to put in place a conducive policy framework that will enable the country to achieve targets and deliver on its commitments.

The most significant policy change that came up at the central level was the amended National Tariff Policy announced in January 2016. The key amendment for renewable energy therein was the waiver in inter-state transmission charges and losses on the transmission of electricity generated from solar and wind projects. The waiver will be applicable to wind power projects commissioned till March 31, 2019 and solar power projects commissioned till March 31, 2017, and will be available for 25 years from the date of commissioning of the projects. However, only wind and solar projects awarded through competitive bidding will be entitled for the waiver. Further, it will apply to wind projects entering into power purchase agreements (PPAs) for selling electricity to the distribution companies for compliance with their renewable purchase obligation (RPO).

Moreover, as per the amendments, the state governments and their power regulators are required to devise a power supply strategy to achieve the 24×7 Power for All target. Besides, the amendments mandate that 8 per cent of the electricity consumption will be from solar energy by March 2022. Further, the provision for renewable energy generation obligations (RGOs) has been introduced, requiring new coal-or lignite-based thermal power plants to establish or procure renewable capacity to meet their RGOs. Further, the amendments seek to make renewable energy more affordable by bundling it with power from plants whose PPAs have expired or have completed their useful life. Ancillary services to support grid operation for renewable energy integration will also be encouraged. Moreover, the procurement of 100 per cent of power produced from waste-to-energy plants has been mandated.

Recognising the need to back the policy intent with adequate financial resources, in the Union Budget 2016-17, the government increased the budgetary allocation for the Ministry of New and Renewable Energy from about Rs 62 billion for 2015-16 to Rs 101.92 billion. The government has also increased the cess levied on coal from Rs 200 per tonne to Rs 400 per tonne, which is expected to mobilise greater funds for renewable energy projects. However, the rate of accelerated depreciation available to the wind projects has been reduced from 80 per cent to 40 per cent with effect from April 2017, which is likely to impact capacity addition in the sector.

In a bold policy move, the government decided to break away from the feed-in-tariff regime and introduce competitive bidding in the wind power sector. To this end, the Solar Energy Corporation of India floated a tender for developing 1,000 MW of wind power projects in eight windy states. Apart from new projects that are allotted under the scheme, wind power projects that are yet to be commissioned and projects that are already commissioned but do not have a PPA will also be eligible for benefits under the scheme. The tender specifies that the Power Trading Corporation will sign PPAs with successful developers. Importantly, metering will be done at the inter-state transmission system (ISTS) level and the buying entity will be responsible for all transmission losses and charges. While the industry has welcomed the move, it has also cautioned that the scheme can disrupt the sector’s growth if it is not adequately complemented with a clear policy roadmap.

Meanwhile, the government issued policy for repowering wind power projects to boost generation from the existing plants. The policy will be applicable for wind turbine generators of up to 1 MW. An additional interest rebate of 0.25 per cent would be given to the new wind projects financed by the Indian Renewable Energy Development agency (IREDA). Under the policy, the state transmission utility will provide augmentation of the transmission system from pooling station onwards. While this is a step in the right direction, it has so far not found any takers as the industry is of the view that certain clauses in the policy are restrictive.

The government also introduced the draft National Wind-Solar Hybrid Policy with the aim of installing 10 GW capacity by 2022. While the final policy guidelines are awaited, the hybrid concept has created enough buzz in the industry, with leading players exploring synergies between wind and solar. In addition, to promote the development of the offgrid segment, the MNRE released the draft national policy for renewable energy-based micro and mini grids in unserved and underserved parts of the country. Under the policy, the ministry aims to set up at least 10,000 projects with a cumulative capacity of 500 MW over the next five years. Apart from the central financial assistance (CFA) that will be available to project developers under the policy, the government will explore mechanisms to boost financial lending for such projects. Meanwhile, the government is exploring the tariff-based competitive bidding process for awarding grid-connected small hydro projects (SHPs) above 10 MW capacity.

States  are waking up to the role of renewable energy in improving energy access and quality of power. With most states already having solar policies in place, the thrust this year is on introducing polices for wind and the offgrid segment. While the Gujarat government announced the state’s new wind power policy, Telangana issued a draft wind policy with the aim to install 2,000 MW of wind power capacity over the next three years.

Meanwhile, the Uttar Pradesh government has released the state’s Mini-Grid Policy, 2016 for promoting decentralised generation of clean power by harnessing renewable energy sources. Under the policy that will remain in force for 10 years, mini-grid projects with a maximum capacity of 50 kW will be installed in unelectrified habitations and in contiguous undeveloped and backward rural/urban areas, deprived of conventional grid supply or with relatively less supply. The Madhya Pradesh government also released the policy for decentralised renewable energy systems. The policy lays major emphasis on rooftop solar PV and it also envisages yearly capacity addition targets of 330 MW for 2018-19, 385 MW for 2019-20, 440 MW for 2020-21 and 495 MW for 2021-22 for grid-connected solar rooftop projects. 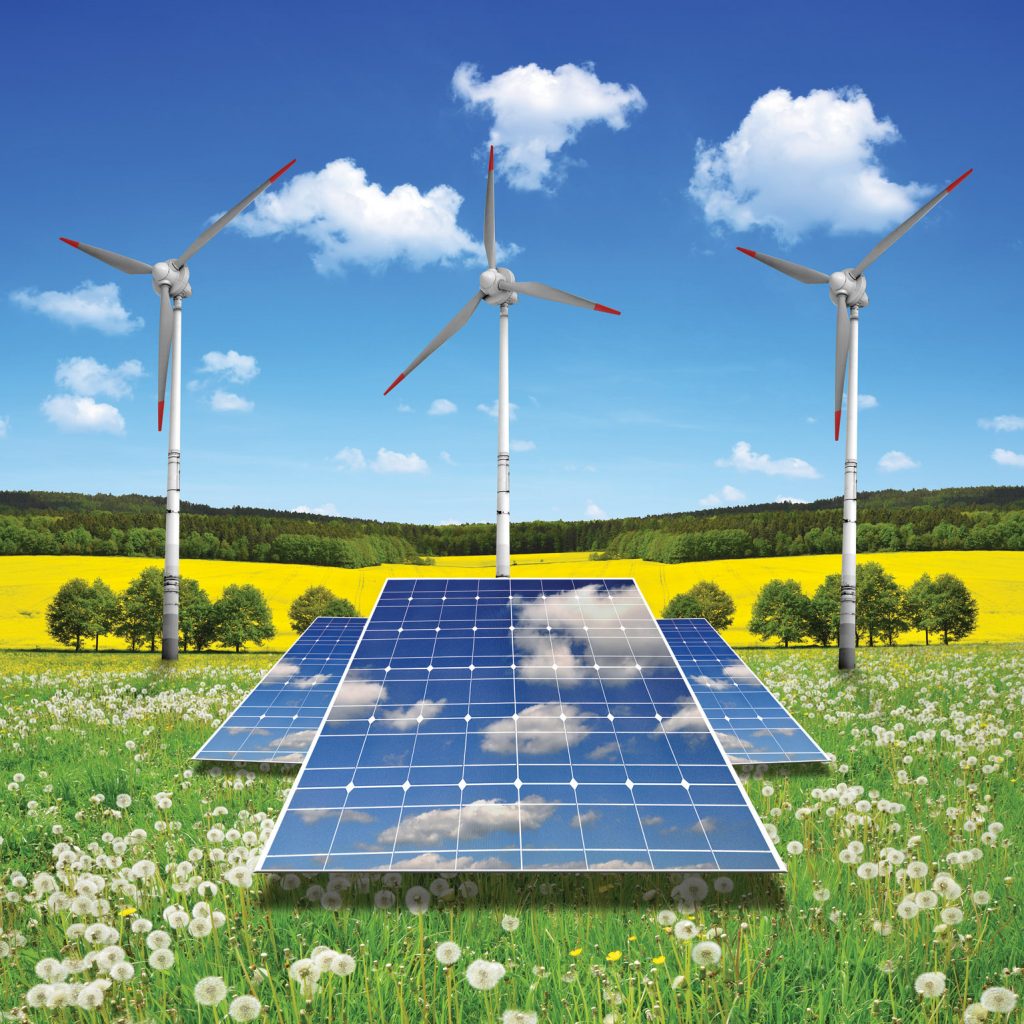 While policy support has been forthcoming, the regulatory scenario has also played an enabling role in the sector’s development. In particular, regulations have sought to revive the RPO market. In line with the provisions of the New Tariff Policy, 2016 that requires state commissions to fix their RPO trajectory, a number of state regulatory commissions specified their year-wise RPO targets. The Maharashtra Electricity Regulatory Commission released its new RPO regulations covering the period from 2016-17 to 2019-20. The RPO for 2016-17 has been set at 11 per cent and will progressively increase to 15 per cent by 2019-20. While the Andhra Pradesh government has proposed a new RPO target of 25.25 per cent by 2021-22, Jharkhand has proposed to increase its RPO target from 5 per cent in 2016-17 to 11 per cent by 2019-20. Other states that have initiated amendments in their RPO regulations are Madhya Pradesh, Himachal Pradesh, Odisha and Rajasthan.

Meanwhile, the central and the state regulators have taken a strict stance for ensuring that developers get paid on time. As an example, the Rajasthan Energy Regulatory Commission directed the Ajmer and Jaipur discoms to pay a surcharge on delayed payments for power procured from wind and solar power projects set up by 21 companies in the state. These companies had signed PPAs with the two discoms in 2009 and 2010. However, the discoms failed to make payments within the time frame specified in the PPAs.

Net metering guidelines have now been issued by most states to encourage the development of the rooftop solar projects. During the past year, while Maharashtra and Gujarat issued their final net metering guidelines, Telangana issued draft regulations for net metering which are yet to be finalised. By and large, all the states have net metering policies in place but on the ground, the progress is still mixed. It is important that states offer flexibility to consumers by doing away with restrictions on system size, streamline the approval process and promote standardisation and best practices in project development to encourage the uptake of net metering-based rooftop solar.

Apart from the various policies that the government has initiated, India is taking up an active role globally for the promotion of renewable energy. In solar, particularly, India is playing a leading role on the global stage, with the setting up of the International Solar Alliance aiming to work in collaboration, towards the deployment of appropriate benchmarks, facilitating resource assessments, supporting research and development and demonstration facilities, and encouraging innovative and affordable applications of solar technologies. India also signed partnership agreements with Indonesia for cooperation in the field of new and renewable energy, with Germany to expand bilateral cooperation in the field of solar energy and the Russian Energy Agency to develop utility-scale solar PV plants and solar equipment manufacturing facilities in India between 2016 and 2020.

While the intent of the government towards developing the country’s renewable energy sector is quite clear, it must now get down to ensuring that the policies are executed well and the benefits are broad-based. Moreover, certain persistent challenges that still impact the viability of renewable energy projects, such as those related to land acquisition, and availability of transmission infrastructure, will need the active involvement of the government for their speedy resolution. Going forward, the renewable energy policy and regulatory space is expected to remain vibrant with a number of announcements expected at both the central and state levels in the coming year.