India has a biomass potential of about 18 GW  and a cogeneration potential of 5 GW. Despite this huge potential, the total installed bioenergy capacity stood at 5.7 GW as of September 2016, accounting for a modest 12 per cent of the country’s total installed renewable energy capacity and 25 per cent of the total biomass and cogeneration potential. Meanwhile, the high potential biofuel market is also at a nascent stage of development.

This slow uptake of bioenergy is mainly attributed to limited regulatory support, inadequate availability of quality raw materials at affordable prices, poor transportation facilities, lack of proper storage infrastructure, improper handling during the pre-processing stage, and lack of proper operation, and maintenance and payment recovery practices. These issues, along with a stagnant policy and regulatory framework, make the bioenergy industry less attractive than other renewable energy segments like solar and wind. However, with the growing focus on reducing carbon emissions, as agreed to at the 21st Conference of the Parties, and to meet the ambitious target of 10 GW of bioenergy capacity by 2022, the central government is exploring ways for progressive blending or substitution of fossil fuels with biomass pellets, bioethanol, biodiesel, biomethane and similar green fuels, both for electrical and non-electrical uses. During the past one year, several new initiatives have been announced by the government in this regard.

In the draft Renewable Energy Act, special emphasis has been placed on non-electrical energy sources, primarily all bioenergy sources, which were not yet covered under any legislation. The government also plans to launch the Rs 100 billion Integrated Bioenergy Mission for the period 2017-18 to 2021-22 to enhance the use of bioenergy for reducing the consumption of fossil fuels. The government is also likely to come up with a new policy on non-conventional energy resources, as it plans to increase the blending limit of ethanol in petrol to 22.5 per cent and in diesel to 15 per cent. For this, it is looking at opportunities to increase ethanol production from bamboo, rice straw, wheat straw and cotton straw, especially in the north-eastern region of the country.

These interventions are likely to provide an enabling environment to domestic companies to scale up and help resolve fuel availability issues, make bioenergy projects viable for financial institutions as well as create awareness, especially in rural areas, about the benefits of bioenergy projects.

Close to 1,300 MW of biomass and cogeneration capacity was installed during the period April 2015 to September 2016. Of this, more than 85 per cent was grid connected and the rest was off-grid, and the cumulative installed capacity stood at 4,882 MW and 836.3 MW respectively.

Maharashtra, Andhra Pradesh, Tamil Nadu, Karnataka and Uttar Pradesh lead in terms of the total installed capacity of biomass and cogeneration projects. During the past year, Punjab emerged as an attractive destination to set up these projects. The state has about 2 GW of biomass potential, of which only 150 MW has been deployed so far. It is in talks with various investors to harness its unutilised biomass potential. 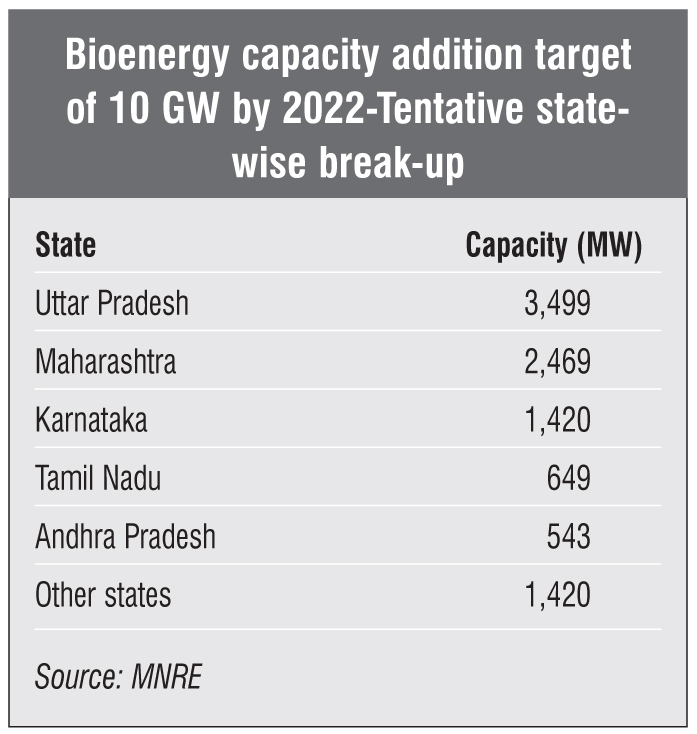 The feasibility of biomass projects depends largely on the fuel cost, which is highly location specific, and thus creates significant variations in levellised tariffs. To address this concern, in March 2014, the Central Electricity Regulatory Commission (CERC) amended the tariff regulations of 2012 to redefine certain parameters to categorise biomass technologies and announce tariffs based on them for various locations separately. High capital costs for rice straw-based projects and juliflora plantation-based plants, alternative methods for fixing biomass prices annually, and restriction on the use of fossil fuels in biomass projects are some of the key amendments introduced by the CERC in 2014.

Despite the reduction in the CERC’s tariffs, various states have announced higher bioenergy tariffs for the year 2016-17. For instance, Maharashtra has increased biomass tariffs by 15 per cent to Rs 7.66 per kWh (without accelerated depreciation [AD]). Recently, Rajasthan has set tariffs in the range of Rs 6.66-Rs 7.40 per kWh for water-cooled condensed and air-cooled condensed technologies, for biomass project developers opting for fuel price determined by the state government. For biogas projects, the tariff has been set at Rs 7.56 per kWh (without AD) and for biogasifier plants at Rs 6.06 (without AD). Karnataka has also followed the rising trend in biomass tariffs and set them at Rs 5 per unit for 2016-17 and Rs 5.18 per unit for 2017-18. For cogeneration projects in the state, tariff rates have been set at Rs 4.45 per unit for 2016-17 and at Rs 4.63 per unit for 2017-18. 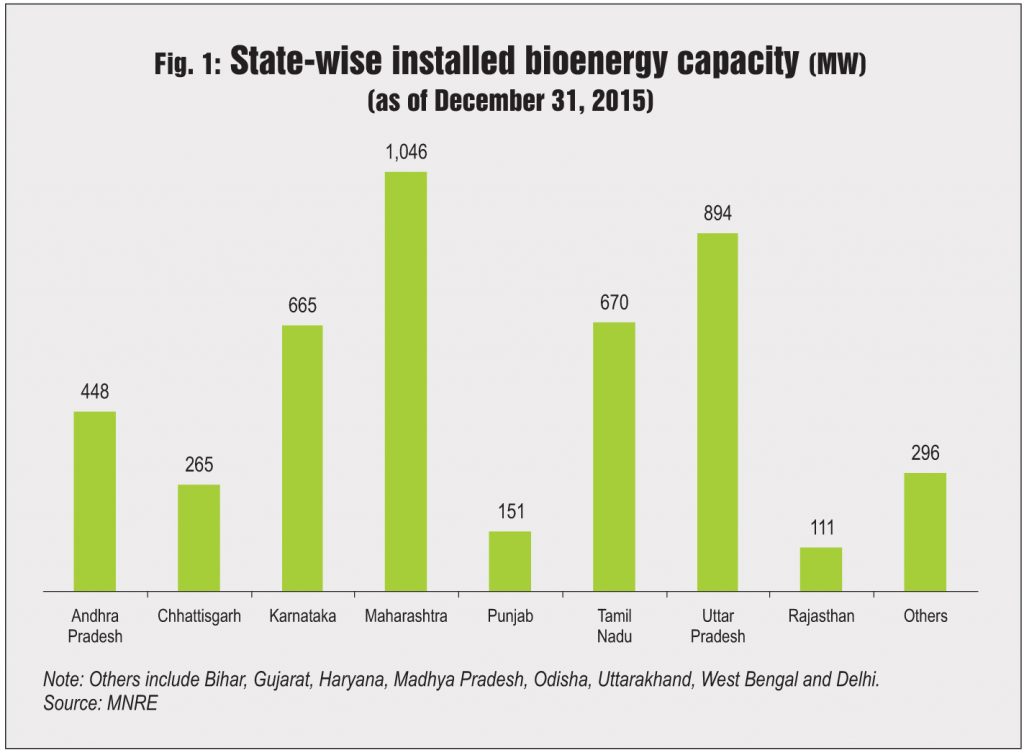 While the biofuel industry has largely been neglected over the past decade, recent government initiatives have been aimed at improving production. In April 2016, the Ministry of Petroleum and Natural Gas (MoPNG) permitted oil marketing companies (OMCs) to increase the ethanol blending limit to 10 per cent in petrol to achieve a 5 per cent ethanol blending across the country as a whole. During the year 2014-15, OMCs achieved a blending fraction of 2.3 per cent, which increased to 5 per cent for the current sugarcane season, for the first time after over three years of making 5 per cent of ethanol blending with petrol mandatory. In order to improve the availability of ethanol and encourage its blending, the government has fixed the delivered price of ethanol in the range of Rs 48.50 per litre to Rs 49.50 per litre. In addition, ethanol produced from other non-food feedstock, besides molasses like cellulosic and lingo-cellulosic materials including petrochemical route has been allowed, the procedure for procurement of ethanol has been simplified to streamline the supply chain, and excise duty has been waived on ethanol supplies to OMCs during 2015-16.

As per the latest estimates of the MoPNG, at present, the biodiesel and ethanol industry in India is worth Rs 60 billion and is expected to touch Rs 500 billion by 2022, based on the demand for petrol and diesel in the country. Currently, the biofuel market is mainly driven by ethanol procurement. Given the rising imports of sugar at a lower price from the US and Brazil, domestic sugarcane production is declining significantly, which is affecting the ethanol production capacity of the country. In this scenario, achieving even 10 per cent ethanol blending target looks highly ambitious.

Under this mission, a bioenergy advisory committee (along with three subcommittees, on biomass, biofuels and biogas respectively) was established on December 4, 2015 with the aim to formulate action points for various schemes and then the base document for the mission. As per the committee, the mission will cover all bioenergy subsectors and address the common issues faced by them. It was also decided that a technical committee would be set up to formulate the action points for the various schemes and to formulate a complete scheme for supporting feedstock or the crop residue supply chain management system for the bio-fuels sector. It was also decided to float a tender for hiring a consultant firm for developing the mission document and the schemes under it. To support the mission, the National Institute of Renewable Energy at Kapurthala is likely to be upgraded and developed into a world-class institution.

To set up these projects, the Ministry of New and Renewable Energy (MNRE) is planning to seek assistance from the states that are performing well in promoting bioenergy projects. Furthermore, the MNRE is working on setting up new state biofuel boards in addition to the four existing boards in Chhattisgarh, Karnataka, Rajasthan and Uttar Pradesh. The committee is also planning to request the Ministry of Environment, Forest and Climate Change to earmark 20 per cent of Compensatory Afforestation Fund Management and Planning Authority (CAMPA) funds for bioenergy/biofuel plantations/biomass energy tree plantation. Work is in progress on various schemes to grow fuels for these projects and also increase the local community participation.

Under the mission, the taxation regime will also be streamlined. The committee has decided to request all the states to create a rational and uniform taxation structure to support the growth of this sector. It has also been decided to request the Ministry of Finance to extend all the benefits available to other renewable sectors such as customs and excise exemptions, tax holiday, etc. to the bioenergy sector as well.

In view of the availability of the Bureau of Indian Standards’ standard for B100 as a stand-alone fuel, it was decided to create, along with the Ministry of Consumer Affairs, a packaging standard for selling B100 in litre-denomination packs. The state biofuel boards would be the monitoring agencies for quality and standards.

Other initiatives planned under the mission include development of various biogas and biofuel research and development (R&D) centres, arrangement of soft loans for these projects, and rolling out of a viability gap funding bidding scheme of bulk supply or construction of domestic (2 m3 and 3 m³ sized) biogas plants.

The committee is also working towards harnessing the huge potential of the biomass pelletisation industry. It has decided to create pellet standards and classify pellets as a renewable source of energy, when the source is certified so that all the benefits already available in the renewable energy industry can be extended to them. The need for a biomass atlas giving dynamic, up-to-date data has also been emphasised under the mission. The MNRE is also considering suitable generation-based incentives for cogeneration plants to operate during off-season, using other biomass fuels.

The long-term outlook for the bioenergy segment seems promising with the rising focus of the government on this segment. As these initiatives are still at the discussion stage, it will be some time before the industry can derive real benefits from these. In the short run, issues related to supply management, transportation and storage, and limited financing options for these projects are likely to prevail in the market.

However, to harness the potential of this segment and resolve power generation as well as waste-handling issues, investors are developing various business models to provide adequate and good quality fuel within the stipulated time frame. Some developers have established a separate wing and others have hired a third party for fuel collection, segregation, processing and transportation. This is likely to help streamline the entire process of generating biomass energy-based power to some extent. Further, with increasing R&D and a strong indigenous manufacturing base, biomass energy is likely to receive greater attention in the future.