Owing to its high solar and wind power potential, Rajasthan was an early mover in the renewable energy space, attracting large developers with its large solar parks. At 9,667 MW, renewable energy makes up about 38 per cent of the total installed power generation capacity in the state. Renewable energy deployment has been on an upward trajectory in Rajasthan. State-wise, it accounts for the fifth highest installed capacity after Gujarat, Karnataka, Tamil Nadu and Maharashtra. Power demand in Rajasthan has increased steadily over the past several years. The growing demand is being met by a combination of conventional and renewable power sources, which have helped the state achieve self-reliance. During 2018-19, Rajasthan met the electricity demand almost in full, reporting a marginal energy shortage of 0.2 per cent.

The 2019-20 budget for Rajasthan provides various grants for the renewable energy sector. It targets the development of 1,426 MW of wind and 4,885 MW of solar energy projects over the next five years. The revised budget also focuses on strengthening the power evacuation and transmission infrastructure. To give a further fillip to the solar and wind segments and address the issues of intermittency, the state government recently introduced two new policies – the Rajasthan Solar Energy Policy, 2019, and the Rajasthan Wind and Hybrid Energy Policy, 2019.

For promoting rooftop solar projects, both net metering and gross metering have been allowed, albeit with some restrictions. For instance, the new policy allows rooftop solar capacity addition, which is up to 50 per cent of the distribution transformer capacity, but with a 1 MW capacity cap. While the new solar policy aims to address the challenges of open access consumers, there are no major incentives to promote open access sale of solar power. There is a 50 per cent concession on transmission and wheeling charges for open access of solar power for the first seven years. However, the compulsory contributions to the Rajasthan Renewable Energy Development Fund may discourage developers from taking the open access route. A positive highlight of the new solar policy has been the promotion of renewable energy-based charging infrastructure for electric vehicles.

The Wind and Hybrid Energy Policy aims to set up 2,000 MW of wind power capacity in Rajasthan. This will also help the discoms meet their non-solar renewable purchase obligations (RPOs), as laid down by the Rajasthan Electricity Regulatory Commission (RERC) for the years up to 2024-25. The policy includes provisions to promote the use of storage systems with renewable energy, repowering of wind power projects and wind power equipment manufacturing. As per the policy, Rajasthan will allow setting up of wind power projects that were approved before March 31, 2016 by the state-level empowered committee under the Wind Policy, 2012. The power from these projects will be sold to the state discoms at a weighted average tariff determined through competitive bidding. 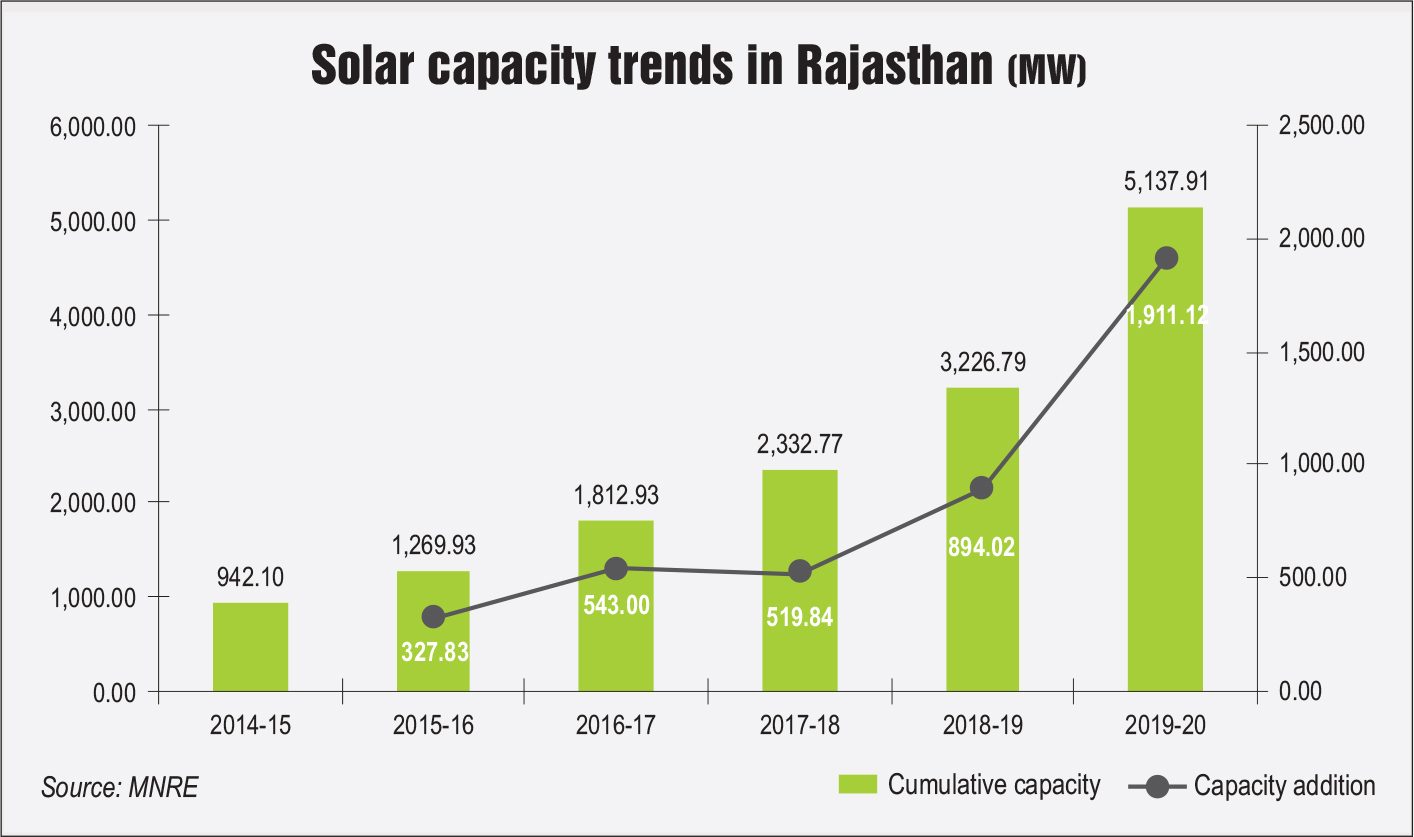 Apart from promoting competitive bidding, the policy aims to facilitate the setting up of wind projects for captive use and third-party sale for consumers within and outside the state. The maximum permissible capacity for an individual project will be limited to the average annual demand. These power producers will also be eligible for renewable energy certificates. As per the policy and Rajasthan’s land revenue rules, the maximum land allotted to developers for the development of wind power projects will be 3 hectares per MW. The policy aims to achieve a hybrid power capacity of 3,500 MW projects by 2025. This includes 200 MW from the hybridisation of existing wind and solar plants, 2,000 MW of new hybrid plants, 500 MW of wind-solar hybrid plants with storage systems, and 800 MW from the hybridisation of existing conventional plants.

In March 2019, the RERC also amended its net metering regulations for rooftop solar systems passed in 2015. The amended regulations are more detailed and clear, with provisions for a payment mechanism for domestic consumers with a net meter connection and for leaving the net metered system. While amending the regulations, the RERC was of the view that the tariff for mega solar power projects determined through the auctions cannot be applied to rooftop solar projects because these projects have lower capacities and higher capital costs. This is a positive move which will help rooftop developers. 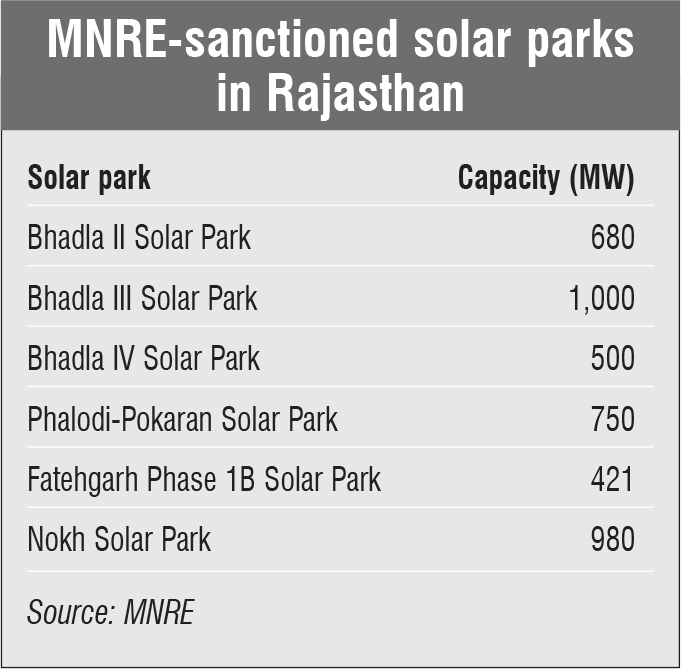 As per the Rajasthan Solar Energy Policy, 2019, the state aims to achieve a target of 30 GW of solar power by 2024-25. Of this, utility- or grid-scale solar parks will account for 24 GW, distributed generation for 4 GW, solar rooftop will account for 1 GW, and solar pumps for the remaining 1 GW. Rajasthan has about 4.8 GW of large-scale solar projects in operation and 7.5 GW of projects are in the pipeline.

Solar parks form a large part of the installed solar power capacity in Rajasthan. Spread across 4,500 hectares and developed in four phases, the Bhadla Solar Park has a total capacity of 2,245 MW. With the commissioning of a 300 MW project at the Bhadla III Solar Park in March 2020 by Hero Future Energies, the solar park became the world’s largest solar park. Further, Rajasthan witnessed one of the country’s lowest solar power tariffs of Rs 2.44 per kWh in May 2017, in the 500 MW solar power auction for the Bhadla Solar Park, Phase III.

Another solar park that has witnessed progress in 2020 is the Nokh Solar Park. In January 2020, Rajasthan Solar Park Development Company Limited invited bids for the construction of 220 kV and 132 kV transmission lines at the Nokh Solar Park in Jaisalmer on a turnkey basis. Following this, in March 2020, NTPC invited bids for a BoS package for the 735 MW Nokh solar project. Recently, in July 2020, SECI invited bids for developing 1,070 MW of solar plants in Rajasthan. This will add significant solar power capacity to the state’s portfolio. SECI also issued a tender for developing 10 MW of grid-connected solar projects at Bagru in the Jaipur district of Rajasthan.

This year, Rajasthan became the first state to successfully bid out and allot capacity more than the MNRE’s target. In July 2020, RRECL allocated 722 MW of solar power capacity to 623 farmers in the state under the PM-KUSUM scheme. This is expected to help farmers generate income from their unfertile or semi-barren land. Under the scheme, farmers who do not have funds to invest have the option to lease out land to private developers and receive an annual income. The RERC has approved a tariff of Rs 3.14 per kWh, which is relatively higher than the prevalent solar tariffs being discovered across various states. Besides helping the farmers with electricity supply in the daytime and generating income, the distributed solar plants will allow the discoms to reduce transmission and distribution losses. This may be a much-needed respite for the discoms of Rajasthan, which have not performed well recently.

barely 725 MW. Further, it witnessed capacity additions as high as 942 MW in 2015-16, enabled by strong policies. However, solar has gained much more traction in the past few years as compared to wind. Rajasthan has not conducted any wind power auction over the past year, with wind power capacity largely concentrated in Gujarat and Tamil Nadu. Although the state has significant wind and solar capacity, it does not have any wind-solar hybrid projects so far. 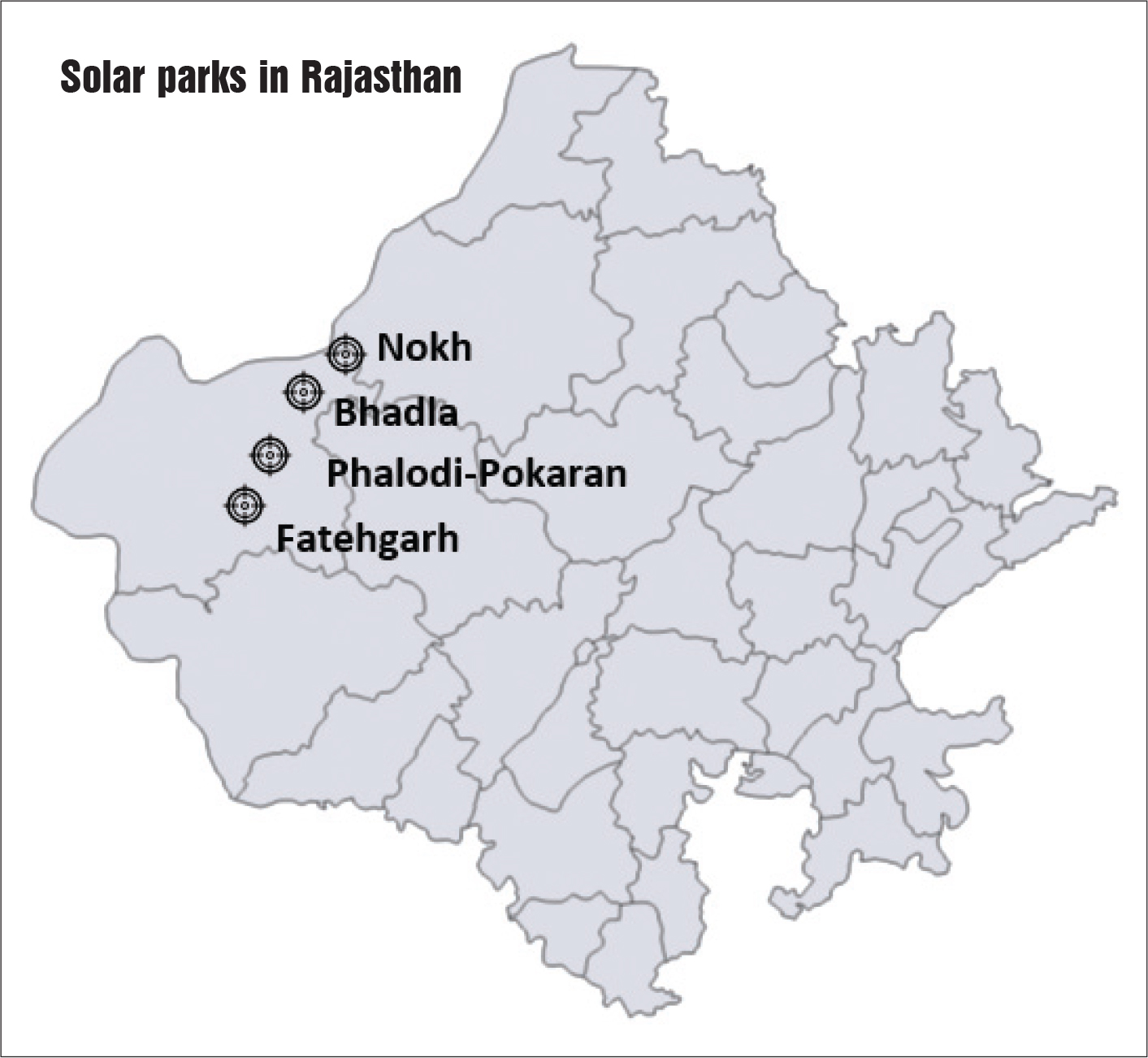 Rajasthan’s approach towards new renewable power capacity addition has been cautious as the state has faced a lot of criticism in the past for generation curtailment, and unavailability of adequate land and transmission facilities. With significant addition of variable power, Rajasthan will have to work on strengthening its transmission infrastructure. While there has been progress in laying transmission lines for solar park networks, more work is yet to be done in this area. Rajasthan is planning to provide land for 19,000 MW of renewable energy parks to address land and transmission issues.

Despite adding a large amount of renewable power generation capacity over the past few years, all three discoms in Rajasthan have not performed well. To set up more projects, especially in the wind and hybrid segment, the discoms’ performance needs to improve and delayed payments should be avoided to instill confidence in developers. To facilitate the uptake of rooftop solar, certain issues need to be addressed. For instance, the rooftop solar capacity connected on an eligible consumer’s premises cannot exceed 80 per cent of its contract demand, while solar capacity at the distribution transformer end is limited to 15 per cent of the rated capacity of the transformer. These restrictions could limit solar rooftop development in the state in the future. In the rooftop space, keeping net metering regulations attractive will help in facilitating the development of larger projects.

Despite a high wind power potential, the state has not conducted any auction till date, and its capacity additions have reduced to nil in recent months. Interestingly, Rajasthan’s upcoming solar power capacity has been won through tenders issued by SECI, while the state agencies have taken a back seat in the bidding activity. The state’s new RPO targets are quite low compared to those prescribed by the Ministry of Power. The new wind policy is expected to address these issues and help in bringing the growth of this segment back on track. The lack of tenders from the state agencies could also be due to the state’s focus on removing uncertainties before expanding capacity. To this end, the state has released several enabling regulations to address developer woes.

Overall, Rajasthan is focusing on developing the right set of policies and addressing transmission and land issues for ensuring streamlined renewable energy growth despite a short-term hit to its capacity pipeline.