With 651 GW of cumulative capacity installed by the end of 2019 and rapid growth expected in the coming years, wind power has emerged as a mainstream clean energy source worldwide. Competitive power prices combined with a mature technology have led to the continued high uptake of onshore wind across all continents. Meanwhile, offshore wind with its immense potential and recent technology advancements is slowly emerging as a game changer in the energy transition. However, competitive prices alone are not enough to switch from fossil fuels to clean energy, and the wind industry still needs to cross a lot of regulatory hurdles in various markets to truly achieve sustainability and provide long-term visibility to investors and developers.

Against this backdrop, the Global Wind Energy Council (GWEC) has recently released the Global Wind Report 2019, which focuses on the current status of the wind power market, deployment in leading countries, industry sustainability and the future outlook.

However, the sector is also facing its set of challenges. As much of the recent capacity expansion has been done through auctions with ultra-low tariffs, margins and profitability are in question for most industry stakeholders including developers, manufacturers and service providers. The depleting revenues have made many companies exit the business altogether as players with deeper pockets and greater risk appetite acquire them. This consolidation has been more pronounced on the supply side, with just 37 manufacturers left out of 100. Even among these, the top five players account for at least two-thirds of the market share. 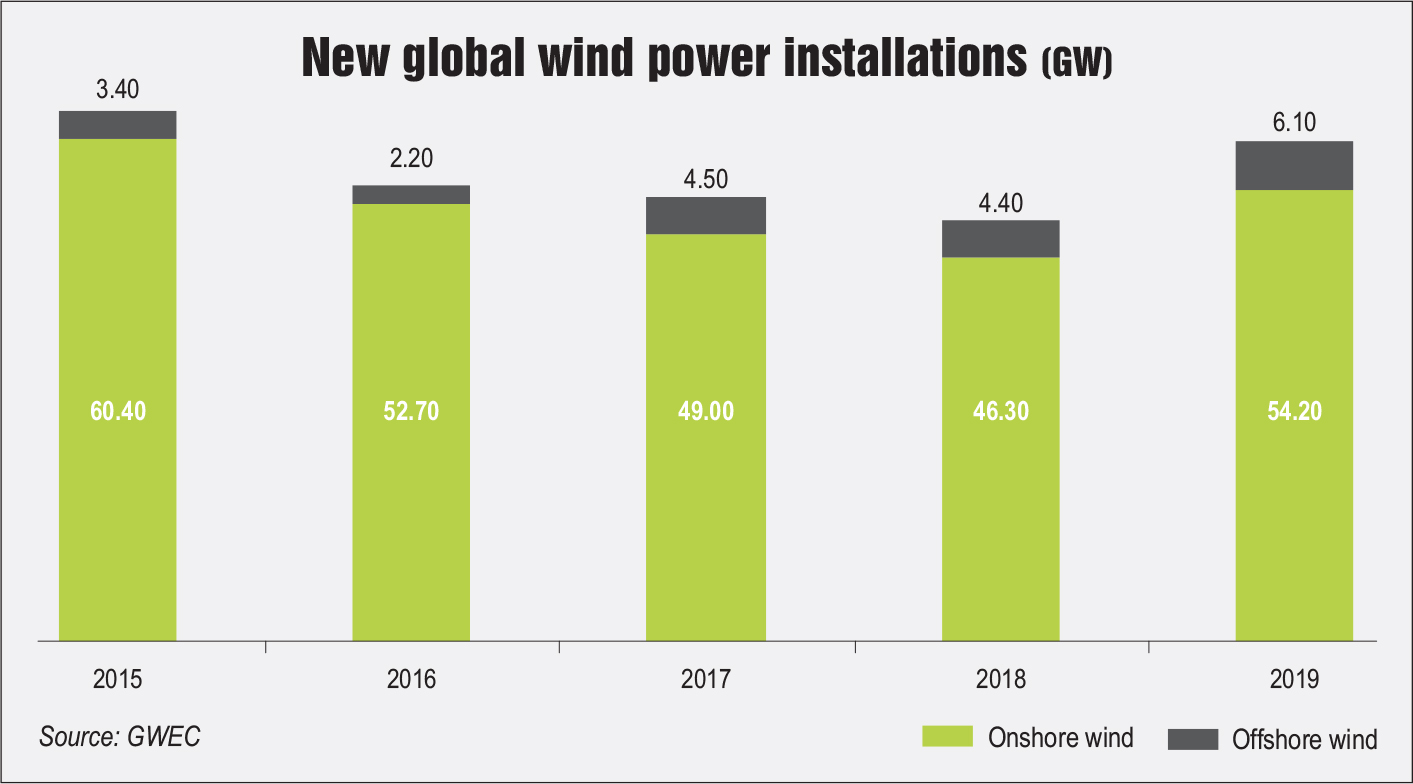 With 37.5 GW of wind capacity as of 2019, India is the world’s fourth largest onshore wind market. The growing energy demand of an expanding population, combined with ambitious government targets of 60 GW by 2022 and 140 GW by 2030, is expected to sustain wind capacity growth. The country’s growing market has attracted global investors, utilities and suppliers in recent years. Technology maturity and capital availability led to a 40 per cent decline in the levellised cost of electricity for wind power between 2015 and 2019. Wind power has become one of the cheapest power sources in the country, costing around 35 per cent less than conventional fuels.

Despite impressive growth numbers, the Indian wind power segment is plagued with challenges, leading to a slowdown in capacity additions in recent months. While 4.1 GW of new capacity was installed in 2017, only 2.4 GW was added in 2019. Moreover, due to issues like low tariff caps, offtaker concerns, and grid and land unavailability, the tenders have been getting a poor response. Thus, they are getting delayed or cancelled. Around one-third of the 17 GW capacity auctioned in the past three years has not been awarded. Even the allotted projects have been delayed by more than six months. With off-takers expecting unviable low tariffs, going for price matching and even contract renegotiation in the face of unpaid dues and transmission delays, developers and investors have become wary.

Moreover, the majority of the auctions have been conducted by central agencies while most wind-rich states have chosen to stay away from competitive bidding. As a result, wind power procurement at the state level has declined, and it is largely dependent on older contracts and central auctions. GWEC had estimated 2.5 GW of wind power capacity addition by the third quarter of 2019, which is almost at par with the actual implemented capacity. GWEC had expected the challenges related to land, transmission and payment delays to remain unresolved during 2019, leading to such a low forecast. Going forward, the new wind power installations are expected to be highly concentrated in Gujarat and Tamil Nadu as the majority of developers have bid for locations in these states in the central auctions. A few projects are also expected to come up in Karnataka and Maharashtra.

There will be delays in project commissioning as adequate transmission infrastructure and project sites are being slowly made available. If lower-resource sites or more expensive tracts of land are used, project costs would increase, resulting in a tariff hike. This in turn would make power offtake a concern with India being a price-sensitive market. Due to the ongoing issues in this space, capacity additions are expected to be in the range 1.5-2.5 GW per annum till 2022, making the 60 GW target attainable. To address these issues, off-takers and tendering agencies must set realistic price expectations to ensure the viability of projects. Moreover, greater efforts are required by the government to improve grid and land infrastructure and clear payment dues to developers to ensure continued growth of the segment. 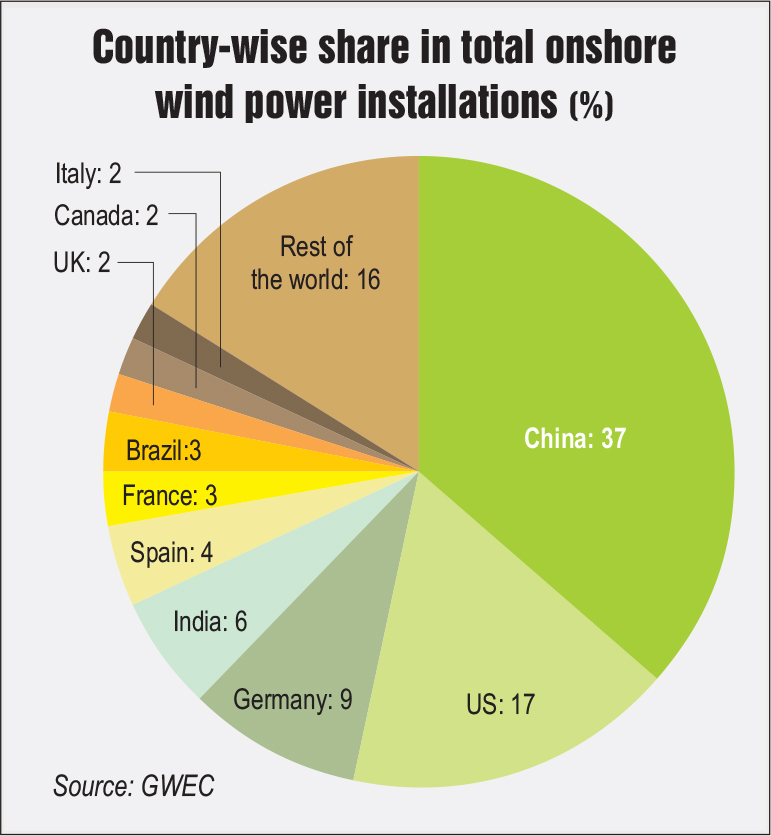 Apart from extensive offshore wind power developments in Europe, there are many new wind markets that are slowing emerging. Even if actual installations are not happening, these countries have started developing policy frameworks or carrying out resource estimation to assess the potential of offshore wind to provide cost-competitive power. Vietnam, India, Brazil and Australia are such markets, which have high offshore wind potential but varying political support.

In India, assessment studies have already been undertaken for a 1 GW project in Gujarat with a focus on the state of Tamil Nadu. The country has a target to install 30 GW of offshore wind capacity by 2030. While there is political will in the country and small steps have been taken towards policy formulation, a key challenge is that offshore wind will find it difficult to compete with extremely low onshore wind and solar power tariffs. The government is considering the next course of action so as to promote the development of this technology in the country.

According to the GWEC, the market outlook for the global wind industry remains positive, which is expected to grow at an annual rate of 4 per cent for the next five years. It expects over 355 GW of new capacity additions till 2024, leading to roughly 71 GW of installations each year. In most geographies, market-based mechanisms like auctions will dominate, except in India and Germany where market strategies need to be redesigned to resolve the issues. Apart from auctions, corporate power procurement will continue to attract growth. Such market-based mechanisms empower consumers, allowing them to opt for a clean energy source, and provide developers with revenue stability for the long term.

The entire world is battling the coronavirus crisis which has hit all industries hard, including wind power. The virus that originated in China and then spread to other parts of the world has disrupted supply chains and virtually stranded many under-construction projects. Though China got the situation under control in two months and restarted its production facilities, this time lag has delayed the commissioning of new projects. Many regions in Europe, North America and Asia have still not eased restrictions, and it is going to take time for normalcy to return as the cases continue to mount. Thus it is difficult to ascertain the actual impact of the pandemic on global wind power installations in 2020 and beyond.