The solar photovoltaic (PV) technology landscape is changing rapidly to meet industry demands. With roughly 580 GW of global PV installations as of December 2019 and capacity additions increasing at a steady pace, more efficient and cost-effective products are required. From the first-time use of silicon to make solar cells in Bell Laboratories in the US in 1953 to the now widely used varieties of mono-crystalline silicon modules, the solar PV industry has taken major strides. In fact, in the past 10 years, the average efficiency of commercial wafer-based silicon modules has increased significantly from about 12-17 per cent, according to the Fraunhofer Institute for Solar Energy Systems. Efficiency increase means greater energy output and a smaller number of modules and a balance of system (BoS) for the same solar plant capacity. Thus, efforts are on worldwide to develop more advanced technologies with higher efficiencies for maximum gains. In this evolutionary process, bifacial technology, which is one of the most important technological shifts in the solar PV market, is driven by the increased adoption of advanced cell architecture and focus on system efficiencies.

Bifacial modules are so named because of their ability to generate electricity from both front and back of the modules. While every solar module generates power through only the radiation received on its front, bifacial modules also produce electricity from the sunlight reflected from the ground on their back. Thus, the total energy generation is much higher than that from other modules. Studies estimate that bifacial offers effective efficiency gains of 5–20 per cent over that of standard modules by increasing energy output from a given module area.

Bifacial technology has been under development for years and it has one of the most advanced manufacturing processes for solar modules today. It has majorly been facilitated by the uptake of passivated emitter and rear cell (PERC). According to the Fraunhofer Institute for Solar Energy Systems’ module technology division, nearly every cell producer that has upgraded to PERC is also working on bifacial technology. Thus, the number of manufacturers producing bifacial panels is increasing and there is a corresponding increase in the number of installations. However, there is no standard design as yet, with varying design criteria from framed and frameless, monocrystalline and polycrystalline designs. One type of bifacial module is the glass-glass module, with solar cells arranged between two glass panes. They are typically used in utility-scale projects and are quite effective in harsh environments because they are less sensitive to moisture penetration.

Apart from the obvious driver of increasing efficiency, there is another key factor of growing affordability of bifacial for manufacturers. A study by Wood Mackenzie found that the production costs for bifacial mono-PERC modules are higher by only $0.005 than their monofacial counterparts. Moreover, monofacial production facilities can be easily upgraded to manufacture bifacial modules. Thus, leading module manufacturers including Trina, Longi, Jinko, Canadian Solar and others are extensively offering bifacial products. Meanwhile, tracking manufacturers have developed specific designs for accommodating bifacial to optimise gains and minimise racking costs.

There are a number of important considerations regarding the viability of deploying bifacial panel arrays at a particular location. The ground albedo or whiteness is the most important of these as it affects the amount of light reflected on the back. Thus, albedo and the effectiveness of bifacial will vary for different surfaces, with the highest for snow or sand, and the lowest for dark surfaces. For instance, studies show that a foil surface with an albedo of 80 per cent contributed an additional 20 per cent power, compared to grass, which had a 9 per cent power gain owing to its lower albedo of 30 per cent. Similarly, output gains from the reflected ground light, measured by albedo, in locations such as Canada that get a lot of snow, are much different from other locations where the albedo effect is lower, the Netherlands, for instance.

Apart from this, for proper results from bifacial, maintenance of the modules and surface is equally important. For instance, if a surface is painted white for greater albedo gains, then regular paint should be applied, which may get faded or wiped out. In addition, the panel arrays’ pitch, height and tilt, as well as the mounting system design, cable management and inverter selection, all impact the amount of shading on ground. If there is too much shadow formation on the ground near the module, the available active surface of the back of the panel reduces, thereby reducing the light reflected on the back. This means bifacial technology is best suited for flat rooftops and ground-mounted arrays so that the tilt angle can be optimised to ensure maximum reflected light on to the rear of the panels.

Lack of standards is perhaps the biggest barrier to bifacial technology uptake. There are disparities in the datasheets of various manufacturers regarding the terminology when it comes to expressing the advantages afforded by bifacial. Some manufacturers state figures for bifacial gain or monofacial power, while others refer to equivalent efficiency or output rear-side gain among various other terms. Another issue is the lack of a standardised definition and methodology for albedo measurement. While many models used to measure albedo rely on satellite data from various sources, this may be insufficient to estimate accurately the behaviour of sunlight on a particular surface at the given time. On the other hand, including the effect of shading and seasonal factors in albedo might make it similar to the local irradiance profile. Moreover, there is a lack of global standard testing procedures for rating bifacial modules, along with difficulties in modelling the power gain with accuracy. There is the risk of potential induced degradation and lack of uniform back irradiance leading to temperature differences over module surface and causing hotspots. There is limited field data available for various surfaces that might make developers vary of choosing bifacial for their projects. The higher cost of bifacial as against other commercially used modules is another major bottleneck in its adoption. However, experts argue that this is easily offset by the efficiency gains from the technology and costs will decrease with the increase in scale. 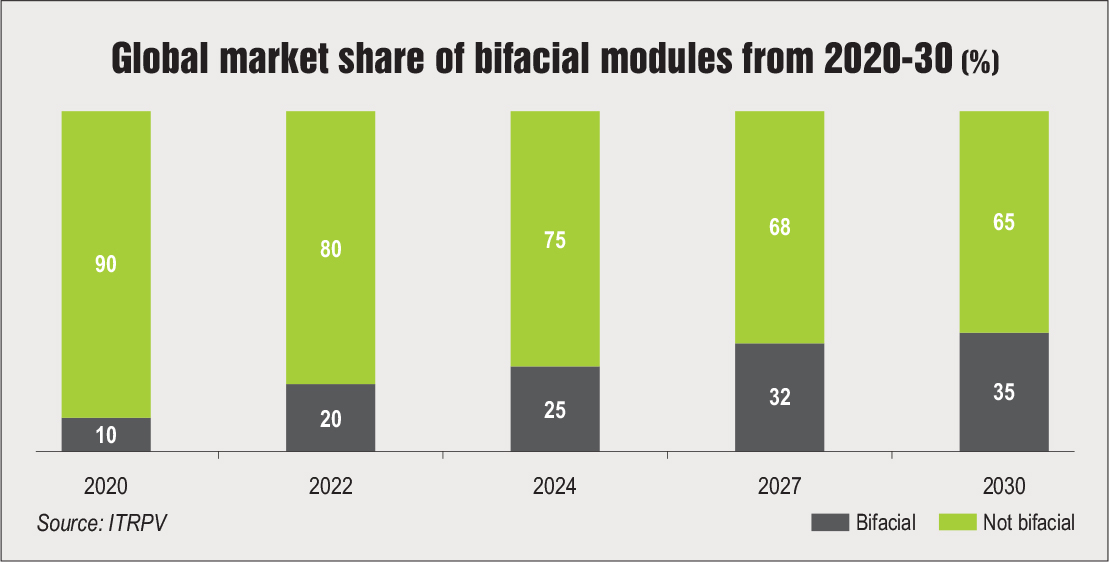 As with any new technology, bifacial is held back by a lack of long-term field data to demonstrate its real-world performance under all conditions. Moreover, the technology still has some obstacles, including the lack of an international testing standard, no common ground for power labelling or pricing, and yield simulation and bankability issues. However, bifacial offers numerous benefits, which more than make up for these issues. Solar power can be generated from a smaller number of modules due to efficiency gains thereby reducing BoS costs as well. In addition, with lower manufacturing costs and improved module quality, the increased generation and lower cost of energy are expected to increase the uptake of bifacial technology. This increase in scale and deployment of bifacial will bring economic gains for manufacturers that could add momentum to the falling trend in the cost of solar power, provided manufacturing capacity is expanded to reach sufficient economies of scale.

As it is, the technology has attracted a lot of attention in recent years and has started to gain market share. Worldwide demand has expanded, with the US, Brazil and Europe increasing their use of bifacial modules for utility-scale solar plants. China is not only the largest manufacturer but also a major end market for bifacial modules. In Europe, northern nations are expected to continue to see bifacial adoption due to the high latitude. The UK and Denmark have more than 150 MW of projects in the pipeline as of September 2019, according to Wood Mackenzie, while the southern European market is lagging behind in bifacial uptake.

While today, most of the modules are still monofacial, the International Technology Roadmap for Photovoltaic (ITRPV) anticipates that the market share for bifacial modules will increase from 10 per cent in 2020 to at least about 35 per cent in 2030. Moreover, bifacial modules will continue to find greater application in utility-scale solar installations where the efficiency gains easily make up for the marginally high costs of this advanced technology.