To meet the growing demand for solar energy, large Indian companies need to diversify their operations to provide a vast range of services. At present, very few Indian companies are vertically integrated, that is, companies that manufacture solar modules, undertake engineering, procurement and construction (EPC), and also provide operations and maintenance (O&M) services. Vikram Solar is one such company, which provides a range of services across the value chain.

The Kolkata-based company was founded 13 years ago. Its parent organisation Vikram India Limited, established in 1974, has over 45 years experience in manufacturing tea processing machinery, sponge iron and textiles. Taking forward the legacy, Vikram Solar has expanded its solar portfolio and now has a presence in six continents.

Currently, Vikram Solar has an annual module manufacturing capacity of 1 GW, and its EPC portfolio in India stands at over 950 MW. The EPC business is almost equally divided into commissioned and under-construction projects. The EPC portfolio for rooftop solar projects stands at 62 MW, including both commissioned and ongoing projects. The company also provides O&M services to 400 MW of solar projects.

The company has commissioned several large-scale projects including a 130 MW project in Bhadla, Rajasthan, a 80 MW project for Gujarat Industries Power Company Limited and a 50 MW project for NTPC Limited in Madhya Pradesh. “The company has undertaken more than 200 rooftop projects in over 500 locations in India, commissioned the country’s first floating solar project and executed several solar projects at airports,” says Rajendra Kumar Parakh, chief financial officer of Vikram Solar.

In March 2018, Vikram Solar commissioned three rooftop solar projects with an aggregate capacity of 450 kWp. A 350 kW project was developed for the Ordnance Factories unit in Kolkata and two projects of 50 kWp each were set up at Bikaner and Jhunjhunu for IOCL’s offices in Rajasthan. In the same month, the company signed an agreement with French Alternative Energies and the Atomic Energy Commission for research and development in the solar and energy storage space. In September 2018, the company completed EPC works for a 10 MW solar project of Oil and Natural Gas Corporation in Gujarat. In the same state, the company also completed a 1.4 MW rooftop solar project for Century Plyboards (India) Limited.

In January 2019, the company secured a contract from NTPC Limited to install a 140 MW solar plant in Bilhaur, located in Uttar Pradesh. The solar plant will be spread across 700 acres and is expected to be completed in late 2020. In the past, Vikram Solar has handled two projects for NTPC Limited – a 50 MW solar plant located in Mandsaur, Madhya Pradesh, and a 130 MW solar plant located in Bhadla, Rajasthan. In January, the company also commissioned two 10 MW solar PV power projects located in Khemasuli and Lalgarh in the Paschim Medinipur district of West Bengal. Both projects were developed for West Bengal State Electricity Distribution Company Limited. The company used its Eldora 60 4BB series and Eldora 60 5BB series cell modules in Khemasuli and Lalgarh respectively.

In February 2019, the company secured an order from Hindustan Zinc for setting up a 1 MW floating solar power project at Ghosunda dam near Chittorgarh in Rajasthan. It also commissioned an 18.5 kW rooftop solar plant for Century Ply (India) Limited. The rooftop project is located at the latter’s headquarters in Kolkata. For this project, the company used its smart Solivo modules, which are developed in collaboration with Tigo, a Silicon Valley-based solar PV solutions company. These modules have multiple smart features including module-level remote monitoring, rapid shutdown, power optimisation and a long string design.

Vikram Solar had expected to gain from the imposition of safeguard duty (SGD) on solar modules and cells imported from China and Malaysia. The company was, however, left disappointed when SGDs were also proposed for manufacturing units in special economic zones (SEZs). Therefore, in August 2018, when the Orissa High Court put a stay order on this case, Vikram Solar along with Hero Future Energies and ACME Solar filed a writ petition. The petition sought exemptions from duties on manufacturing units in SEZs. It also stated that the EPC contracts that were already awarded should be kept out of the ambit of SGD.

The company has not been able to benefit from the imposition of SGD. This is because the company now needs to pay SGDs for the imported solar cells from China which are used to manufacture solar modules. Therefore, the imposition of SGD on cells and modules manufactured in SEZs has made surviving in the market very challenging. It has increased the cost of domestic solar equipment. With this, the cost of solar projects has increased by 25 per cent. The cost escalation has pushed domestic module manufacturers out of the market and adversely affected the growth of projects within the country. Meanwhile, SGDs have failed to stop the import of solar equipment, which costs less even after paying SGDs.

Despite working in a crowded EPC market in India, the company commissioned over 100 MW of solar projects in 2017-18, and aims to have a cumulative EPC portfolio of 1.2 GW by 2018-19. On the O&M business front, the company needs to be patient. Currently, the margins of O&M providers are tight owing to the high cost of research and development. However, with the increase in the size of assets, the cost of solar O&M is expected to decline. According to Renewable Watch Research, the O&M market in India is expected to reach Rs 17.6 billion by 2022-23. Vikram Solar can leverage this opportunity with its O&M business.

Net, net, there are a few bumps ahead for every business vertical of the company, but for each segment the future seems optimistic. Industry experience of over four decades and a diversified portfolio will prepare the company for the long road ahead. 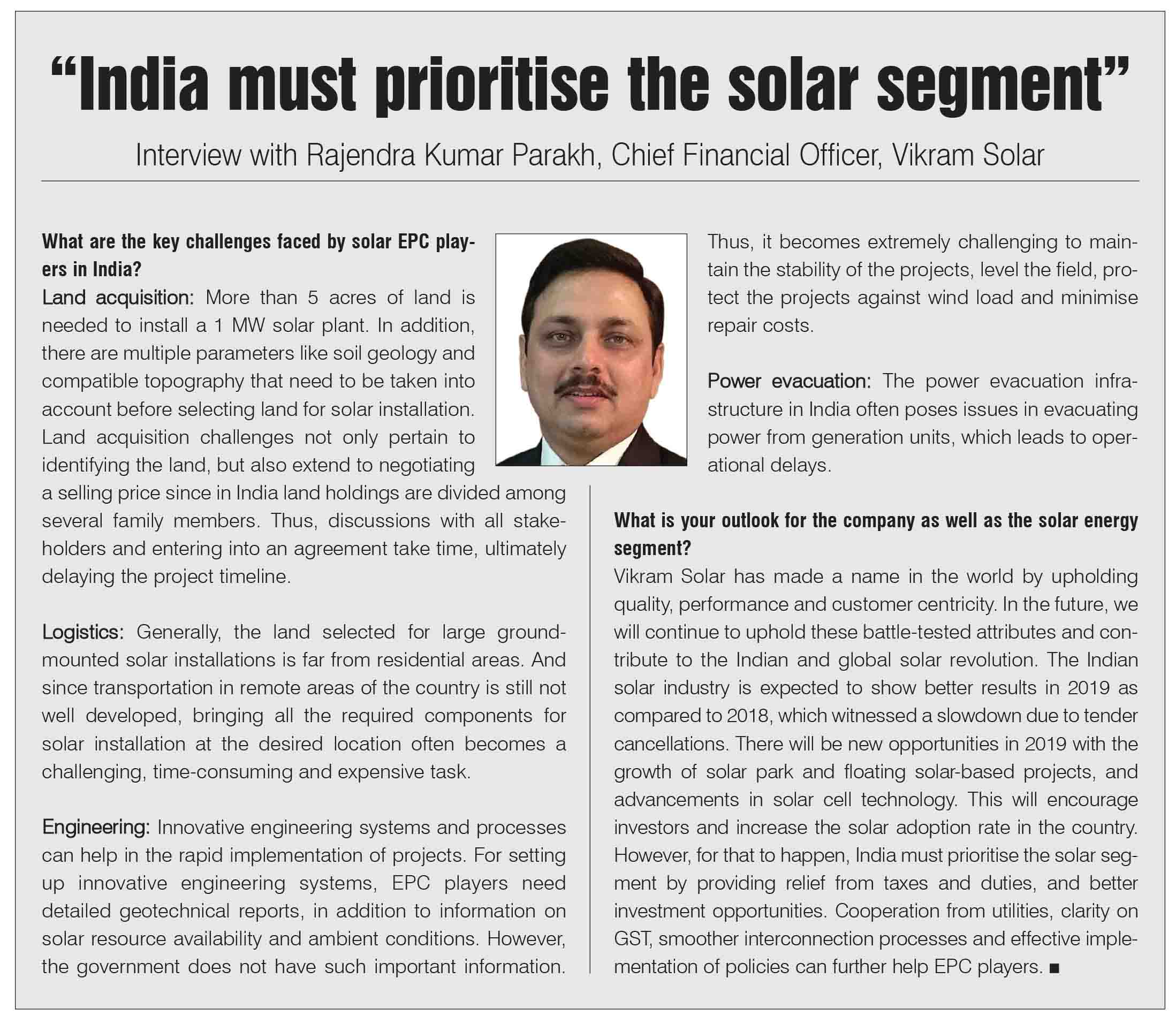 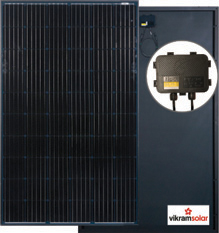 February 2017
Vikram Solar has received a double award at the 5th ET Bengal Corporate Awards 2017 held at the Taj Bengal, Kolkata on February 8, 2017. It won the pr...
More