The global demand for heat in industrial processes is expected to increase at an average annual growth rate of 1.7 per cent till 2030, as per the European Solar Thermal Industry Federation. About 90 per cent of this demand is being met by coal, oil and gas. However, solar thermal could be an ideal substitute as it can provide a temperature range of 50°C to 400°C. This makes it well suited for low and medium temperature industrial processes like boiling, drying, cooking, sterilising, distilling, dyeing and compressing. However, at present, solar energy has a share of less than 0.1 per cent in heat consumption by the global industrial sector.

The situation in India is similar, with the rapid growth in solar PV capacity addition completely shadowing the thermal aspect of solar energy. Unlike the highly enabling and competitive solar PV market, the solar thermal market has not developed as expected till now. This is mainly due to low awareness, little visibility of existing systems, high upfront costs and longer payback periods. However, owing to high fossil fuel-based energy prices and the growing demand for heat for industrial processes, solar heat for industrial processes (SHIP) is slowly gaining traction in the country.

India is blessed with high solar radiation and has a strong local industry to provide affordable solutions to consumers. This has led to a growth in SHIP plants, especially in the dairy, chemical and textile industries and for community cooking. As per the International Energy Agency (IEA), in 2016, India had the fourth highest solar collector installations in the world after China, Turkey and Brazil, and along with Mexico, it had the highest number of new SHIP installations in 2017. India witnessed the installation of 36 new SHIP plants in 2017 with a total collector area of 15,313 square metres. Hence, by the end of March 2018, the country had a 10 per cent share in non-concentrating and 33 per cent in concentrating solar thermal collectors installed worldwide. 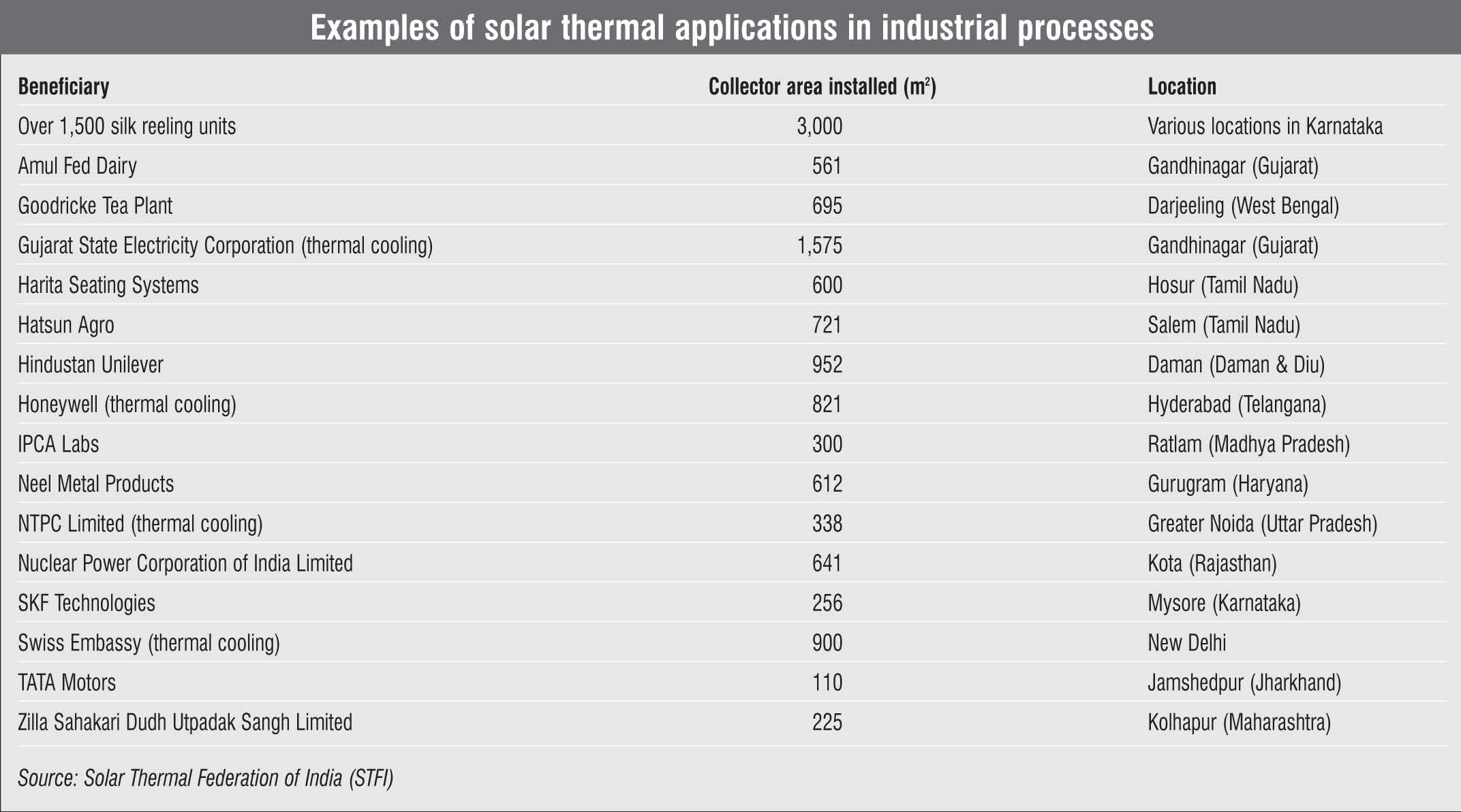 Estimates suggest that about 6,673 MW of thermal capacity installed by the end of 2016 helped the country save 884,789 tonnes of oil equivalent per annum. This, in turn, led to an emission reduction of 2,856,099 tonnes of carbon dioxide equivalent per annum. Hence, solar thermal has huge potential to help in the fight against rising pollution and climate change.

Going forward, greater awareness, along with suitable financial models, is needed to ensure higher uptake by industries. Government impetus in the form of enabling policy support, such as clean heat obligations, can further drive up the demand for solar thermal systems in the country.