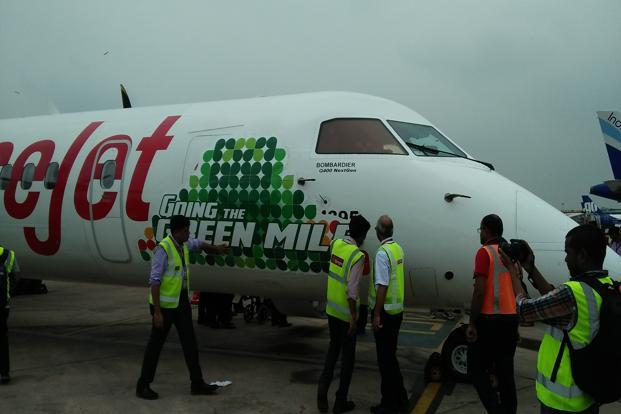 A flight running on biojet fuel has successfully completed its test journey from Dehradun to Delhi. The flight was operated by India-based operator SpiceJet and the fuel was prepared by the CSIR-Indian Institute of Petroleum, Dehradun.

According to a Press Trust of India report, the 45-minute flight from Dehradun to New Delhi was operated with a Bombardier Q400 aircraft. The aircraft’s right engine used this fuel which is a combination of bio-fuel derived from the Jatropha plant (25 per cent), and aviation turbine fuel (75 per cent). About 330 kg of biojet fuel was consumed by the flight. The fuel has been recognized by the American Standard Testing Method (ASTM) and it meets the specification standards of Pratt & Whitney and Bombardier for commercial application in aircraft.

Biojet fuel is low cost and can help significantly in reducing carbon emissions. Its use in the aviation industry has the potential to reduce the dependence on traditional fuel by up to 50 per cent on every flight and may also help lower fares. Reportedly, the government is planning to come out with a policy for the use of biofuel in the aviation sector.