Tamil Nadu has one of the largest renewable energy portfolios in the country, second only to Karnataka, which has 12.4 GW of installed renewable energy capacity as of end 2017. High resource availability, the gap between power demand and supply and supportive government policies in the initial years all contributed to the state’s growth in renewables. However, over the past few years, the state has consistently failed to meet its renewable purchase obligation (RPO) targets, as no new significant capacity additions have taken place due to surplus power. In fact, over a period of five years, from 2013-14 to 2017-18, only 1 GW of new wind capacity was added in the state. Tamil Nadu also faced strong criticism for curtailing solar and wind power generation, and delaying monthly payments to generators by as much as five months.

The state’s discom, Tamil Nadu Generation and Distribution Corporation Limited (TANGEDCO), was among the lowest ranked in the discoms’ quarterly performance review for October-December 2017, even after joining the centre’s Ujwal Discom Assurance Yojana (UDAY). The aggregate technical and commercial losses of TANGEDCO reduced only marginally from 14.53 per cent in 2016 to 13.84 per cent in 2017. This was mainly due to the gap between the average cost of supply per unit of power and per unit average realised. In fact, the state did not make any progress towards smart metering, distribution transformer metering in urban and rural areas, or feeder segregation, all of which have contributed to the poor rating of the discom.

The state seems to have reconsidered its strategy in the beginning of 2017-18 and started working towards improving its RPO compliance. TANGEDCO launched three large tenders in 2017; however, no new auction has been conducted in the state over the past eight months in the solar or wind power segment. Meanwhile, in December 2017, the Tamil Nadu Electricity and Regulatory Commission (TNERC) issued draft norms for making scheduling and forecasting of wind and solar energy mandatory for connecting to the grid, and penalising deviation from the schedule. 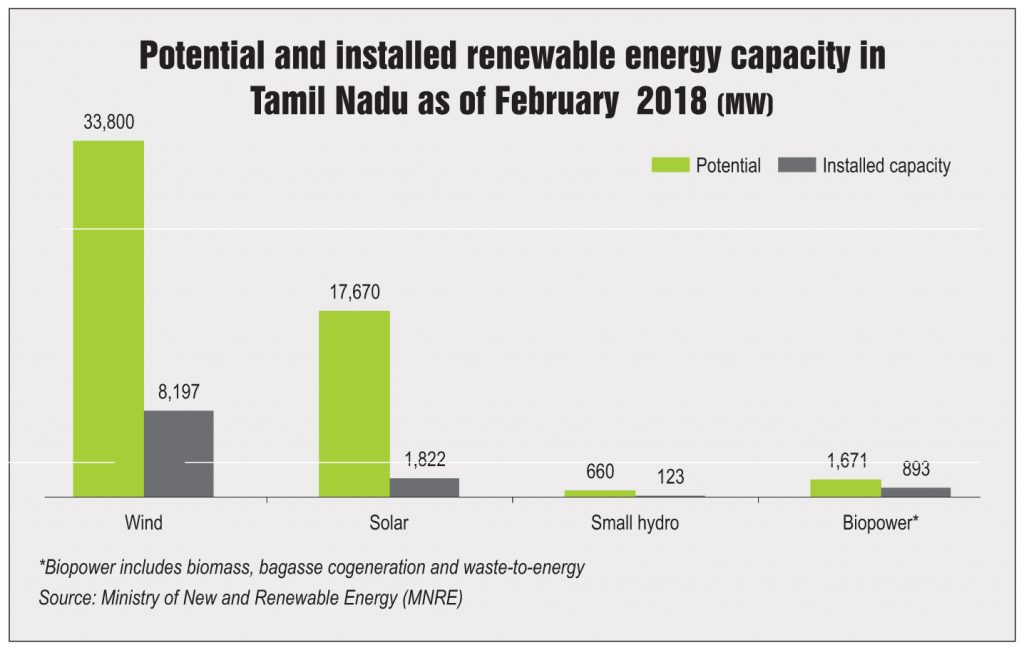 TANGEDCO tendered 500 MW of solar projects in February 2017 to meet its RPO, and the ceiling price for this tender was kept at Rs 4.50 per kWh. However, bids were received for only 292 MW of capacity, with tariffs ranging from Rs 4.40 to Rs 4.50 per kWh. This was the second auction to get such a tepid response after the previous tender for 500 MW of solar capacity, which received bids for only 117 MW in November 2016, owing to grid curtailment, payment delays and tariff renegotiation issues in the state. Rays Power Infra emerged as the lowest bidder in the February 2017 auction, quoting a tariff of Rs 4.40 per kWh for 100 MW of capacity. However, no power purchase agreements (PPAs) were signed as TANGEDCO stated that the tariffs were too high in comparison to the tariffs discovered in other states. The discom wanted tariffs to be renegotiated, first at Rs 4.40 per kWh for all the bidders, and then at Rs 3.47 per kWh, which met with resistance from the developers.

In June 2017, TANGEDCO finally witnessed a successful auction, under which technical bids for 3,700 MW of capacity were received against the tendered capacity of 1,500 MW. This happened after TANGEDCO joined UDAY, which restored developers’ confidence in the discom’s ability to pay on time. The winning tariffs quoted by the successful bidders ranged from Rs 3.47 to Rs 4 per kWh, with Raasi Green Energy emerging as the lowest bidder. In this auction, too, TANGEDCO directed the developers to sign their respective PPAs at the lowest quoted tariff of Rs 3.47 per kWh, which was accepted by all the developers given that tariffs were declining everywhere. The PPAs for 1,500 MW of solar capacity were signed in September 2017, with the Neyveli Lignite Corporation (NLC) securing 700 MW of project capacity. The smaller projects (<50 MW) will be commissioned by September 2018 and the larger capacities are scheduled for September 2019. 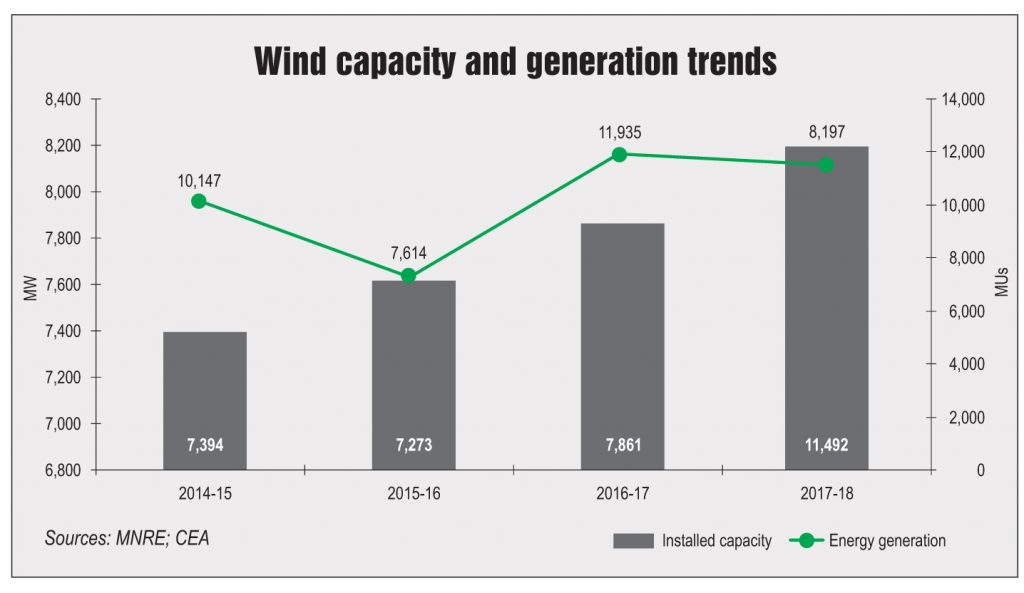 In June 2017, TANGEDCO announced a tender for 500 MW of grid-connected wind projects to meet its non-solar RPO. This was the first ever wind auction by any state in the country, and the ceiling price was fixed at Rs 3.46 per kWh. The results of this auction were announced in August 2017 and Regen Powertech emerged as the lowest bidder with a tariff of just Rs 3.42 per kWh for 200 MW of wind capacity. This tariff was lower than the tariff achieved in the Solar Energy Corporation of India Tranche I auction of February 2017, setting a high standard for other states looking to move away from feed-in tariffs towards competitive bidding. The other winners were Leap Green Energy, which quoted a tariff of Rs 3.43 per kWh for 250 MW, and NLC, which quoted Rs 3.45 per kWh for 500 MW, but was awarded only 50 MW. TANGEDCO signed PPAs with Regen Powertech and Leap Green Energy on October 16, 2017, for a total capacity of 450 MW at the rate of Rs 3.42 per kWh, and these projects are expected to be commissioned by January 2019. TANGEDCO was also in discussions with TNERC for seeking approval for the allocation of 450 MW to NLC instead of just 50 MW. 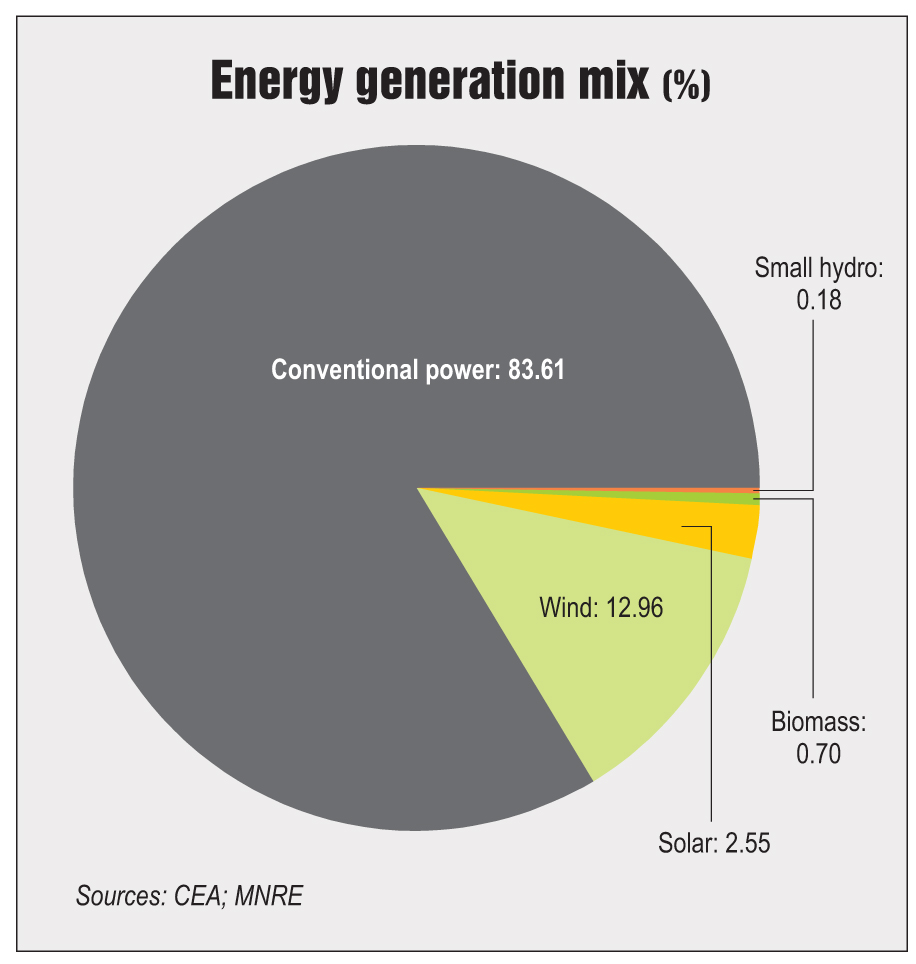 Despite being the first state to tender wind capacity, Tamil Nadu does not have any wind energy policy in place, and all the wind policy issues are governed by a comprehensive tariff order released in March 2016. As per the tariff order, charges for wind transmission, wheeling and scheduling, and system operations are 40 per cent of the charges applicable to conventional power, while the cross-subsidy surcharge is 50 per cent of that levied on third-party open access customers. The tariff order had fixed a benchmark tariff of Rs 4.16 per kWh till March 2018, and a new benchmark tariff of Rs 2.86 per kWh has recently been proposed by TNERC, which is yet to be finalised. Further, the old solar policy of 2012 has not yet been renewed, but a new solar benchmark tariff of Rs 3.11 per kWh has been proposed by TNERC.

An important development in the regulatory landscape was the introduction of draft guidelines by TNERC on the forecasting and scheduling of solar and wind power. These guidelines make it mandatory for all solar and wind energy generators in Tamil Nadu to appoint a qualified agency for scheduling and forecasting their solar and wind power generation, and these details are then to be provided to the state load despatch centre. A deviation charge would be levied as a penalty if the rate of error goes beyond 10 per cent. 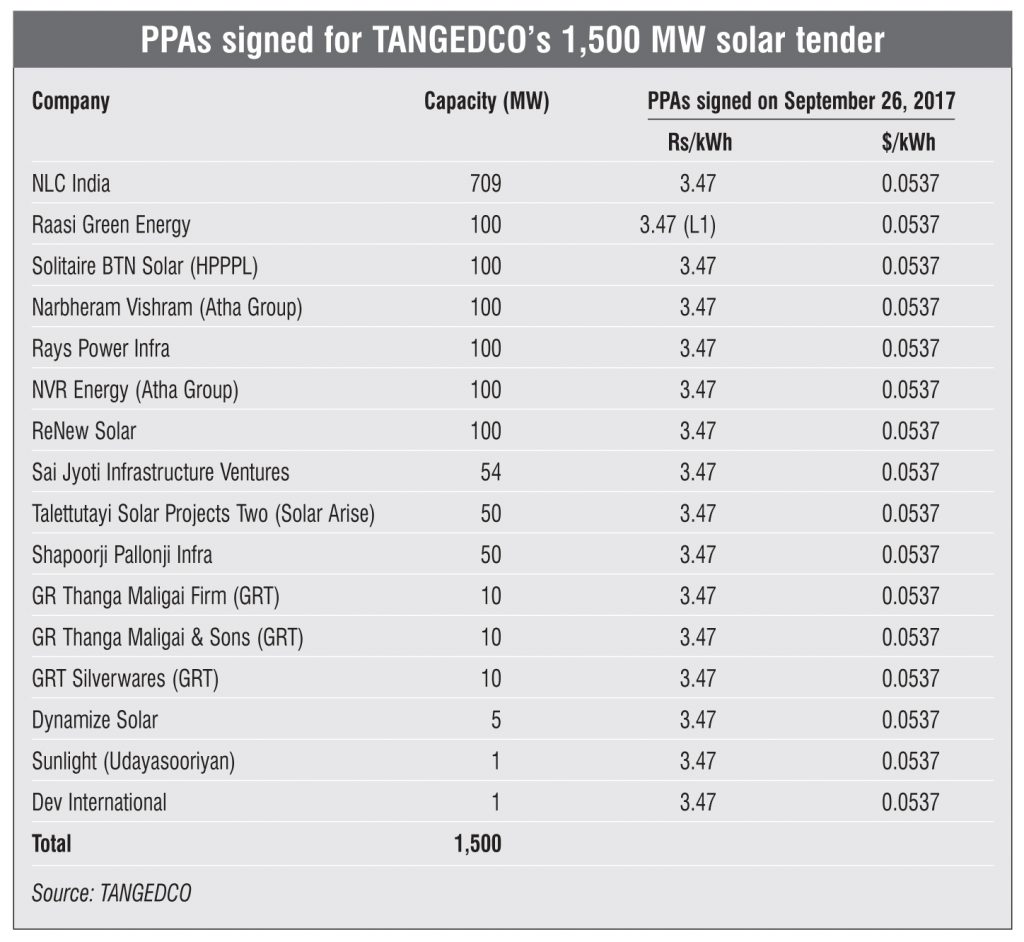 Since the state has some of the oldest wind farms in the country, with obsolete technologies and equipment, there is huge potential for the repowering of older turbines. In addition, Tamil Nadu has about 60 GW of offshore wind potential. To tap this potential, the state needs to continue upgrading its transmission infrastructure and introduce supportive policies to stay ahead in the race. The IEEFA study predicts that the state will double its wind power capacity and increase its solar capacity by six times by 2027, driven by low tariffs. This in turn will increase discom profitability. In fact, TANGEDCO has recently received in-principle approval from TNERC for tendering 3 GW of renewable energy capacity, and 1.5 GW each of wind and solar capacity. These significant capacity additions and future auctions will revive the confidence of both developers and investors, reinstating Tamil Nadu as the renewable energy hub of India.