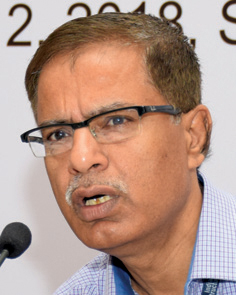 A 1989 batch officer of the Indian Railway Service of Electrical Engineers (IRSEE), Harish Chander is currently general manager of Railway Energy Management Company Limited (REMCL). He joined REMCL about six months ago, on deputation from Indian Railways, where he held the post of additional divisional railway manager at Adra, in Purulia district West Bengal.

At REMCL, Chander oversees the organisation’s overall functions including power procurement planning for Indian Railways, advisory on regulatory matters, renewable energy project planning and execution, and transmission line management. It is also his job to make the railways energy efficient. Chander believes that with the Railways’ pace of electrification, better management of power demand and supply is needed. Moreover, with the cost of power procurement rising, economising energy sources is a high priority, especially through wind and solar power. Therefore, despite the various challenges in procuring renewable power, such as the lack of transmission capacity, the Railways will continue to pursue clean power procurement.

REMCL is making good progress in developing a solar and wind power portfolio for Indian Railways. It has tendered 99 MW of solar power capacity and 45.5 MW of wind capacity. As of December 2018, Indian Railways total renewable portfolio stood at 130 MW, and this is expected to increase to 1,200 MW by 2020-21.

During the 30 years of his professional experience with Indian Railways, Chander has worked with Eastern Railway, South-eastern Railway and the Integral Coach Factory, Chennai, among others, in various capacities. Of these, Chander’s most memorable assignment was his stint at the Integral Coach Factory, as an assistant electrical engineer. As this was his first job after joining Indian Railways, he enjoyed learning its fundamentals and getting first-hand experience in the workings of the country’s rail network.

Chander is an alumnus of Kurukshetra University. He has a participative management style, wherein he likes to take the opinions of the entire team on board and involve them in decision-making.

A man of simple habits, Chander lives by the old adage of “early to bed and early to rise”, which, he believes, helps in maintaining a healthy work-life balance. He also does Vipasana meditation and enjoys taking long walks.