The tendering activity in the Indian renewable energy space slowed down in April 2018 as compared to the preceding months. The period from December 2017 to March 2018 witnessed an unprecedented volume of tenders in both solar and wind power segments. According to the tender trajectory issued by the Ministry of New and Renewable Energy (MNRE), 3 GW of capacity was to be tendered in December 2017, followed by 3 GW in January 2018, 5 GW in February 2018 and 6 GW in March 2018. However, a number of tenders issued during this period have been facing delays due to factors such as uncertainty in the industry over the impact of import duty on cells, on tariffs. This prevented solar companies from bidding for new projects. This was accompanied with a change in bidding guidelines, which led to delays in processing the tenders. In a positive development, the change in bidding guidelines means and any additional safeguard duty that is imposed after a bid has been finalised can be passed on to the discom. A number of state agencies have started factoring in the new mechanism in the ongoing and upcoming tenders. For instance, Maharashtra State Electricity Distribution Company Limited (MSEDCL) has reintroduced its 1 GW tender with a clause that allows winning bidders to revise tariffs and recover the safeguard duty. According to the MNRE, about 30 GW of capacity is expected to be tendered in 2018-19 with 30 GW to follow in 2019-20. Of the 30 GW of capacity to be auctioned in 2018-19, April has witnessed about 1.3 GW of new tenders and several cases of retendering. The following table provides the details of the tenders issued in April 2018. 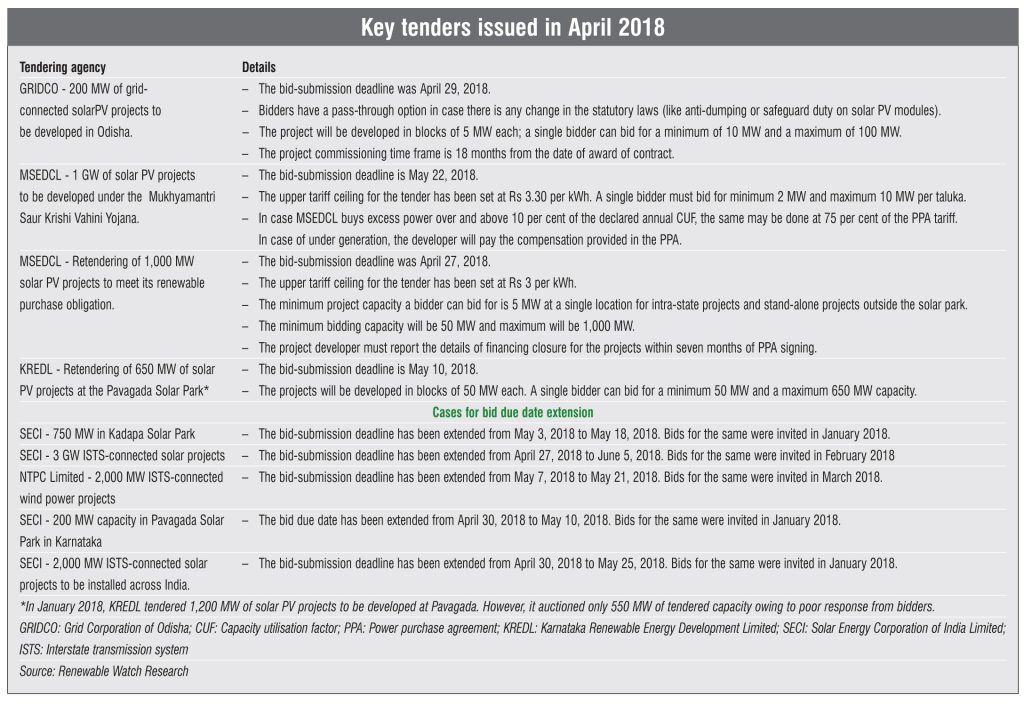