Gujarat’s renewable portfolio is the fourth largest in the country. In spite of this, the state has not been able to meet its renewable purchase obligation (RPO) targets, both solar and non-solar. Being a power-surplus state, Gujarat had slowed down its renewable energy development  for a few years. But over the past few months, it has revived its renewable expansion plans. Gujarat Urja Vikas Nigam Limited (GUVNL) has launched four large tenders to enable state discoms to fulfil their RPOs. Of these, two have already been concluded. In the rooftop solar segment, the state has released new net metering guidelines in order to promote uptake in the state. Renewable Watch takes a look at the current renewable energy scenario in Gujarat…

The outcome of the recent solar and wind tenders indicates that Gujarat is one of the most sought after states for solar and wind project development. GUVNL tendered 500 MW of solar power projects in mid-2017, with 425 MW open for all and 75 MW only for central PSUs, state PSUs and government-controlled organisations willing to execute power purchase agreements (PPAs) with GUVNL at the lowest tariff. The tender was oversubscribed by almost four times as firms responded with technical bids of over 2 GW in September 2017.

The winners were GRT Jewellers India Private Limited, which quoted the lowest tariff of Rs 2.65 per kWh for 90 MW of solar capacity; Gujarat State Electricity Corporation Limited (GSECL) and Gujarat Industries Power Company Limited (GIPCL), which quoted tariffs of Rs 2.66 per kWh and Rs 2.67 per kWh respectively to develop 75 MW each; and Azure Power, which quoted Rs 2.67 per kWh to develop 350 MW, but was awarded 260 MW. No capacity was allocated under the second category because both GSECL and GIPCL participated as general bidders in the open category. Tata Power Renewable Energy Limited (TPREL) and ReNew Power were the other large players that participated in the auction but could not win. 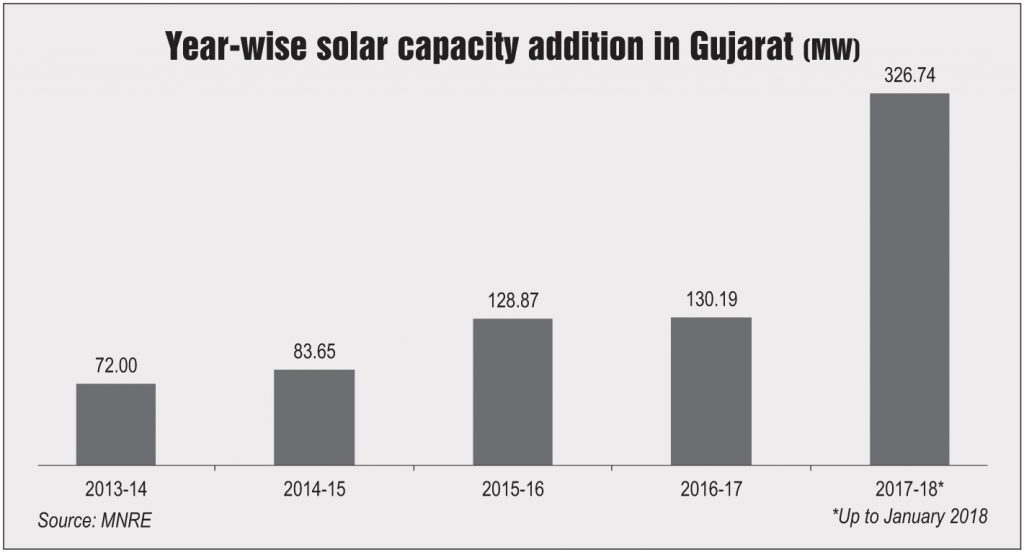 In the wind power segment, tariffs dropped to a record low level of Rs 2.43 per kWh in GUVNL’s 500 MW auction held in December 2017. This was lower than the lowest solar tariff of Rs 2.44 per kWh quoted in the Bhadla Solar auction in May 2017. It was also lower than the previous low of Rs 2.64 per kWh achieved in one of Solar Energy Corporation of India’s wind tenders. Among winners in Gujarat, Sprng Energy and K.P. Energy, both quoted a tariff of Rs 2.43 per kWh. While Sprng Energy bid for 197.5 MW, K.P. Energy bid for 30 MW. Three companies quoted a tariff of Rs 2.44 per kWh. These were Verdant Renewables, Betam Wind Energy (Engie) and Powerica, which bid for 100 MW, 29.9 MW and 50 MW respectively. ReNew Power quoted a tariff of Rs 2.45 per kWh to develop 200 MW, but won only 17.6 MW of capacity. If the 75 MW of capacity set aside for PSUs is not allocated to them, it would be awarded to ReNew. In all, 12 companies participated in the financial round, quoting tariffs below Rs 3 per kWh. 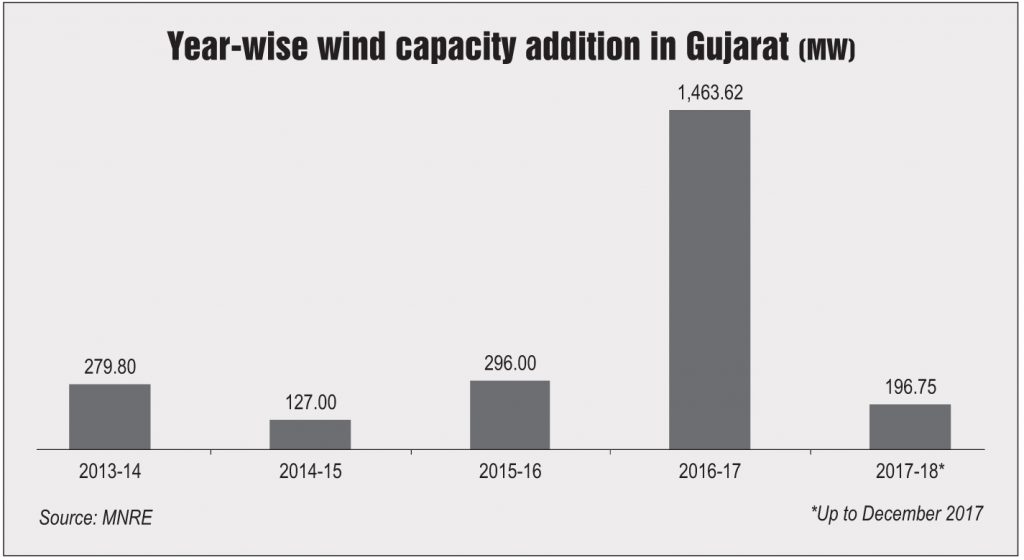 It must be noted that both solar and wind power tariffs have showed an upward trend in the latest tender results released by Karnataka Renewable Energy Development Limited and Maharashtra State Electricity Distribution Company Limited, respectively. The lowest tariff for solar has shot up to Rs 2.94 per kWh while that for wind has reached Rs 2.85 per kWh.

A key reason for tariffs in Gujarat being so low is that the state’s discoms have the highest credit ratings, which helps alleviate the risk associated with renewable projects to some extent, leading to lower bids. That said, for solar power projects, the module prices have spiked since the tender results were released. Developers are rolling the dice and hoping that the price trend reverses soon. However, given the growing global demand for panels, it seems unlikely. Moreover, there is uncertainty regarding the imposition of safeguard and anti-dumping duties by the Indian government, both of which will have a negative impact on the project development cost. 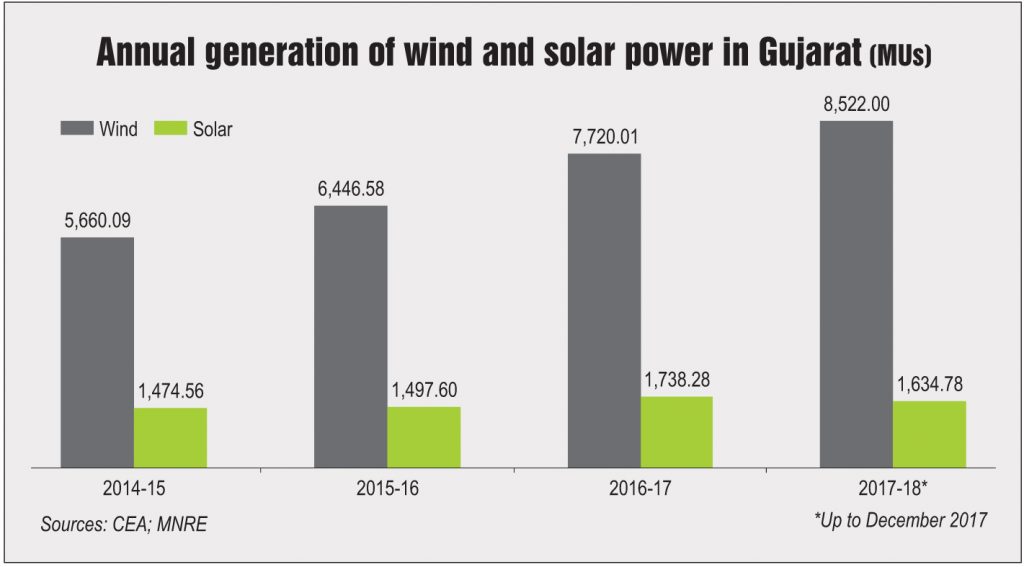 The Gujarat Electricity Regulatory Commission (GERC) has been quite active in formulating renewable energy policies for the state. In October 2017, it published amendments to the regulations for grid-connected rooftop solar net metering. The new regulations apply to all rooftop systems in the state. GERC has specified in the new rules that the maximum capacity of a rooftop solar photovoltaic (PV) system installed at any eligible consumer’s premises, except residential consumers, should be 50 per cent of the consumer’s sanctioned load/contract demand. In the case of residential consumers, the capacity of the rooftop solar PV system is not subject to the sanctioned load/contract demand. Regarding the interconnection agreement between a discom and a rooftop solar PV project owner, the regulations state that all consumers, except residential consumers, must ensure that the capacity of their rooftop solar project does not exceed 50 per cent of the contract load/demand/ sanctioned load during the initial two years of the connectivity agreement. 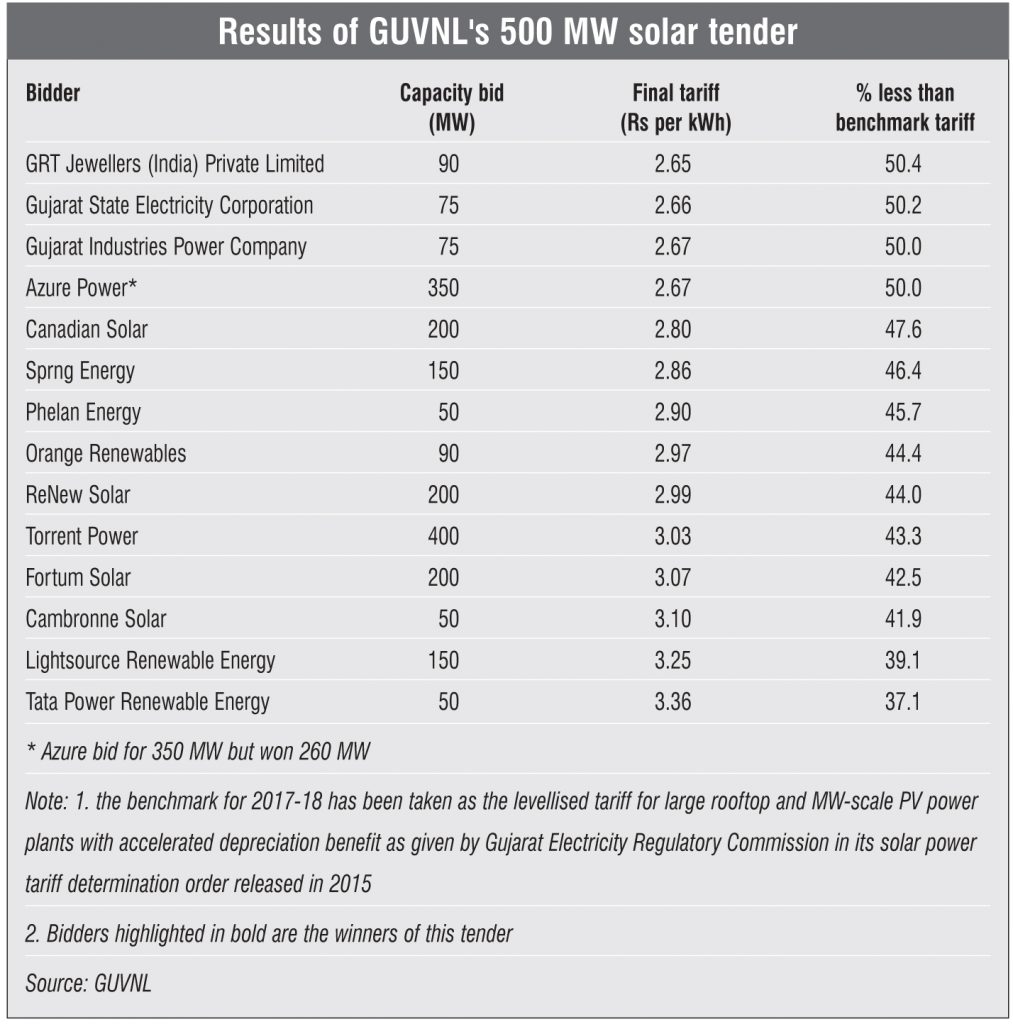 However, the regulations do not address certain bottlenecks that slow down solar power development in the state. For instance, the policy has imposed a ceiling of 1 MW on rooftop solar projects. According to industry experts, this artificial capping will inhibit the growth of the rooftop solar segment.

Meanwhile, in January 2017, GERC issued draft regulations for solar and wind power to facilitate the large-scale integration of solar and wind generating stations while maintaining grid stability and security through forecasting, scheduling, and by implementing a commercial mechanism for deviation settlement of generators. These regulations are crucial for enabling the transcos in the state to effectively manage the increasing renewable energy capacity in the energy mix.

In February 2018, GUVNL tendered 500 MW of solar PV and 500 MW of wind projects to be developed across the state. Under both the tenders, the minimum project capacity that a single bidder can bid for is 25 MW, while no upper limit has been specified. Thus, a single bidder can bid for the entire tendered capacity. Further, GUVNL has given the greenshoe option to project developers, that is, they can produce an additional 500 MW of solar or wind power at the lowest tariff (L1). The option allows any bidder who has been successful in the 500 MW auction to develop extra capacity if they are willing to do so at the L1 tariff. 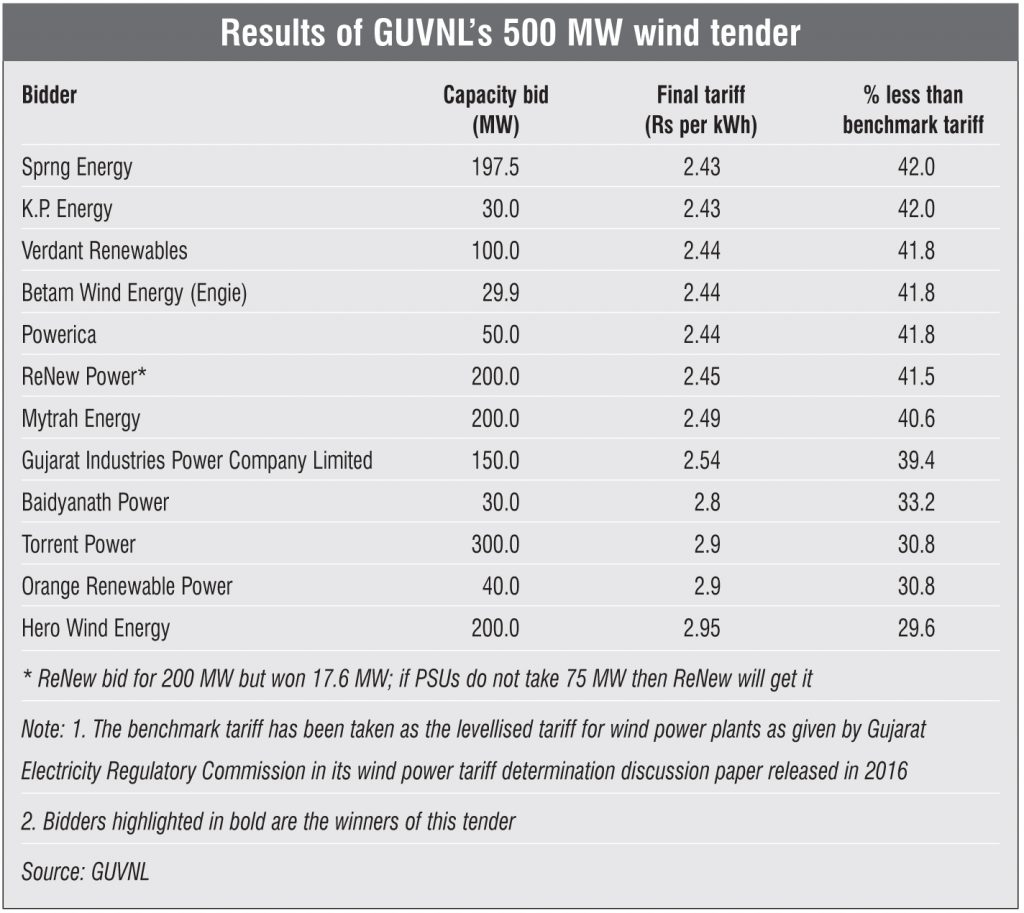 For both solar and wind projects, the successful bidder will be responsible for setting up the plant, including the transmission network up to the delivery point. The PPAs will be signed within one month from the date of issue of the letter of award (LoA). The PPAs will be executed between GUVNL and the selected bidders for a period of 25 years from the date of commercial operation. For solar, the successful developers will have to secure the financing arrangements within nine months of the date of issue of the LoA. For wind, developers are required to secure the financing arrangements within seven months of the date of PPA signing. The maximum time period allowed for the commissioning of the entire project capacity with the encashment of performance bank guarantee and reduction in the fixed tariff will be 27 months from the date of execution of the PPA or till the tariff becomes zero, whichever is earlier.

Besides, there are two upcoming solar parks in the state – the 700 MW Radhnesada solar park and the 500 MW Harsad solar park, both in Banaskantha district. For the Radhnesada solar park, about 3,500 acres of land has already been acquired and transmission infrastructure is under development. However, the internal infrastructure work will start after the final detailed project report (DPR) has been prepared. The Harsad solar park is at the preliminary stage of development as the DPR is being prepared. Land for the project has been identified at Harsad and Navapara villages.

In sum, the state has one of the most comprehensive renewable energy policies. In addition, the development of a strong interstate transmission system would help the state augment capacity to meet its RPO targets. The rooftop solar segment is also on the right track and going forward, Gujarat is likely to maintain its position among the top five states in this space.