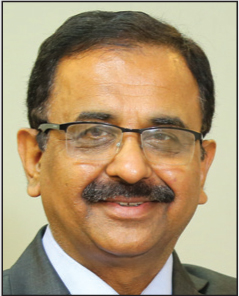 Balraj Joshi was appointed chairman and managing director of NHPC Limited in September 2017 and also holds additional charge as director, technical. He started his career with NHPC as a probationary executive at the Salal project in Jammu & Kashmir in October 1982. During his distinguished career spanning more than 34 years, he scaled new heights and contributed significantly to NHPC’s development by working on many projects: Salal, Dulhasti, Kurichu (Bhutan), Teesta V, Teesta Low Dam III and IV, Parbati III, Chutak and Chamera III. His successes led him to the position of executive director, design and engineering at NHPC. Apart from this, he has been associated with several NHPC consultancy assignments for projects in Myanmar and Bhutan.

For Joshi, it is a source of regret that more than 60 per cent of India’s huge economically exploitable and viable hydropower potential remains untapped. As the world takes notice of the impact of industrial and development activities on the environment, the demand for clean energy is going to increase and he hopes that this will give the hydro sector an immense opportunity for growth. He says that to overcome the various challenges in the segment, a multipronged strategy will have to be adopted, which should include easing of clearance processes, making available long-term soft loans and encouraging the state governments to become willing and proactive partners.

Joshi’s most challenging assignment was resurrecting the Dhauliganga power station after it was inundated in 2013 owing to a cloud burst and unprecedented flooding in Uttarakhand. He, along with his team, worked hard to restore the functioning of the plant as soon as possible.

Flexibility is a key feature of his management and operational style. He believes it is vital to be able to adapt to different scenarios and different teams, and to accommodate different views before finally taking a firm decision.

He has been working in the hydro sector ever since he obtained a degree in civil engineering from the Government Engineering College, Karad, Maharashtra. Post this, he went on to do his postgraduation in hydropower development and planning from the Norwegian Technical Institute, Trondheim, Norway, under a NORAD scholarship.

During his spare time Joshi practises yoga and pranayam. He enjoys music and likes to sing and play musical instruments. He also likes to read when he gets the time. His wife is a homemaker and his son is a medical officer with the Indian Navy.