Solar cities are being developed across the country, including eight in the north–eastern region in Arunachal Pradesh, Assam, Manipur, Mizoram and Tripura. While the cities of Guwahati and Jorhat in Assam are to be developed as model solar cities, Agartala in Tripura and Aizawl in Mizoram are already on the path of transformation to pilot solar cities. Other solar cities in the region include Imphal in Manipur, Itanagar in Arunachal Pradesh, and Kohima and Dimapur in Nagaland. The north-eastern states are not rich in solar resource; however, the development of solar cities in the region will light the way for solarisation and uptake of renewable energy.

The north-eastern states have been slowly and steadily adopting solar power. Small-scale solar systems in the form of rooftop solar and stand-alone systems for off-grid applications have greater uptake compared to large-scale grid-connected systems. Remote locations prove to be a challenge for grid connectivity. However, despite geographical constraints, solar parks are being developed in some suitable areas. The states of Arunachal Pradesh, Meghalaya and Nagaland have solar park projects in the pipeline with aggregate capacities of 100 MW, 20 MW and 60 MW respectively at the state level. Besides, a solar power plant of 1 MW capacity was implemented by the Arunachal Pradesh Energy Development Agency (APEDA) and commissioned in Itanagar in April 2018.

There is significant potential to expand rooftop solar in these states. To achieve the rooftop solar target, the Ministry of New and Renewable Energy (MNRE) is implementing a grid-connected rooftop and small-scale solar power plant programme. Under this scheme, central financial assistance amounting to 70 per cent of the benchmark project cost is provided for the special category north-eastern states. To this end, Manipur has notified its solar rooftop policy and most of the states have notified their net metering regulations. Assam has been assigned a solar power target of 663 MW for 2022, which is the biggest state target among the north–eastern states. In an effort to achieve this, Assam has undertaken a variety of solarisation initiatives. A 700 kW grid-interactive solar power plant has been set up on the roof of the Guwahati railway station which has made the station fully solar powered. Solar study lamps have been distributed to schoolgoing children in Assam under the MNRE’s Sanctioned Solar Study Lamp Scheme, introduced in 2017-18. 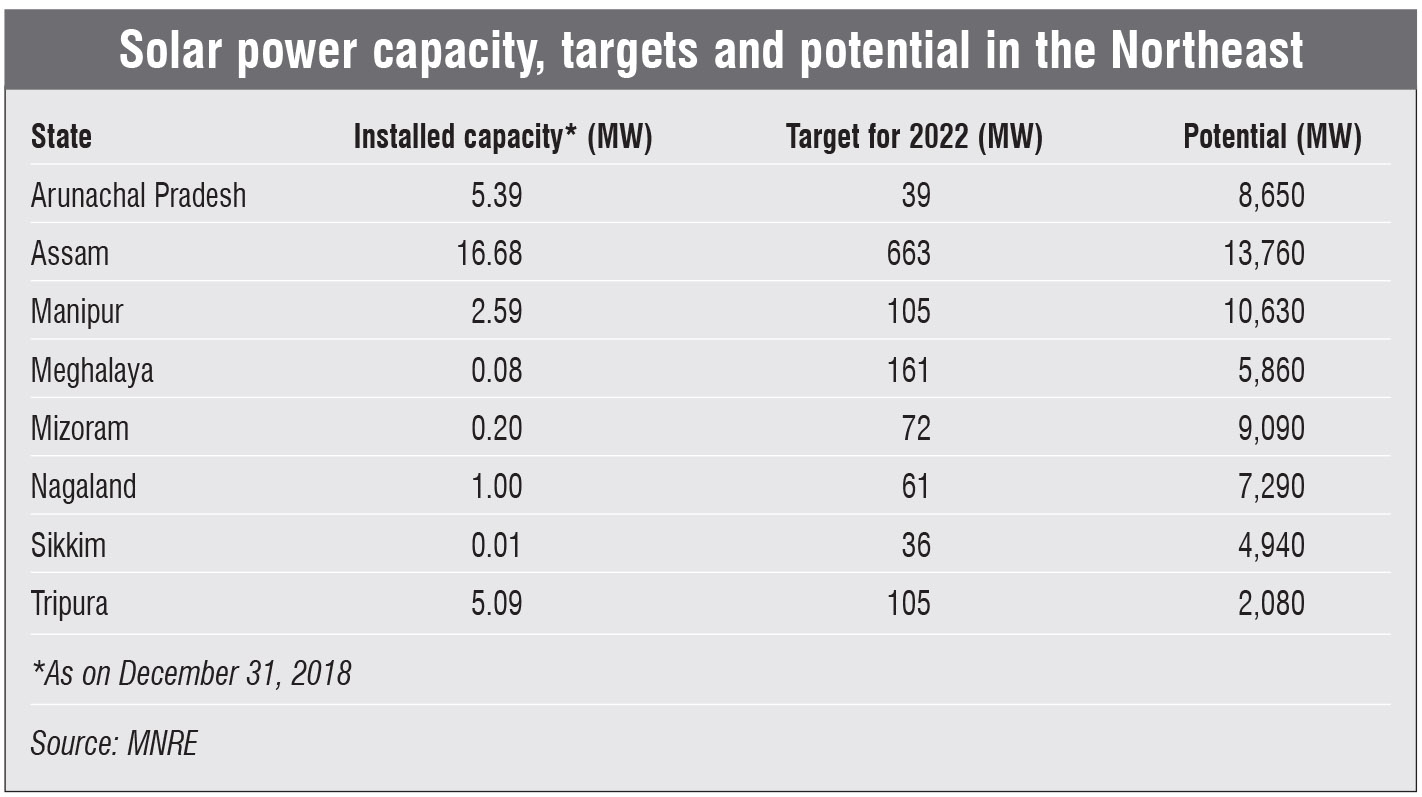 The MNRE had sanctioned 60 cities under its Development of Solar Cities scheme, which included 13 pilot cities and five model cities up to the Twelveth Five Year Plan period. The pilot cities include the solar cities of Agartala and Aizawl, while Guwahati and Jorhat will tentatively be developed as model cities. The pilot and model cities will each receive financial assistance up to Rs 250 million and Rs 950 million respectively, provided the municipal corporation, city administration, state or any other agency pledge an equal amount.

In the pilot solar city of Agartala, the scheme is being implemented jointly by the Tripura Renewable Energy Development Agency (TREDA) and the Agartala Municipal Corporation (AMC). A task force was constituted for the implementation of the programme and a Solar City Cell was established. The final master plan has received in–principle approval from the MNRE. The projects implemented under the scheme include the installation and commissioning of a 45 kW power plant in Ujjayanta market, 30 kW of solar energy in hostels, distribution of solar lanterns to 20,000 families and organising service camps for awareness. Several small–scale solar projects have been set up across hospitals, hostels and guest houses. Under this scheme, the Aizawl pilot solar city has set up solar photovoltaic (PV) projects with a cumulative capacity of 90 kW and solar water heaters with a cumulative capacity of 1,272 square metres (63,600 litres per day). In Nagaland, Kohima and Dimapur have been selected for development as solar cities. The programme aims to reduce grid power consumption by 10 per cent over five years through the uptake of renewable energy in the two cities. 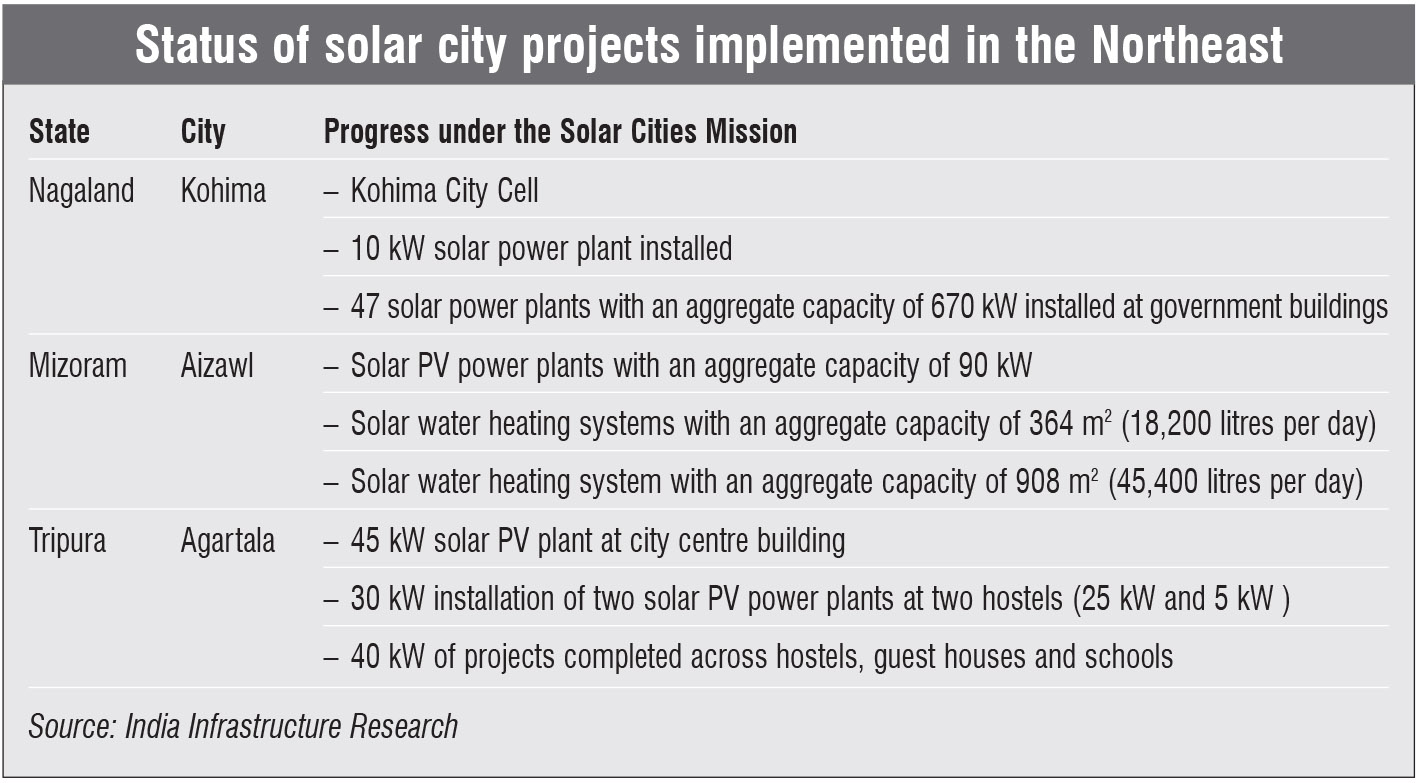 The solar city master plans for the north-eastern cities have been approved. These comprehensive plans outline the strategies for renewable energy deployment and energy efficiency as well as the key lessons from global success stories. Action plans for utilisation of funds have also been incorporated. Urban local bodies such as municipal corporations and renewable energy development associations will work in cohesion to ensure development of these solar cities in accordance with their respective approved master plans.