The Jharkhand Renewable Energy Development Agency (JREDA) has invited bids for the installation and commissioning of 5 MW of grid-connected rooftop solar projects. The projects will differ in capacities and will be placed on various government buildings in Jharkhand. The project is estimated to cost Rs 400 million and is expected to be completed within four months of the bid being awarded.

As per the tender guidelines, bidders are required to submit an earnest money deposit of Rs 208,000. The successful bidder will be responsible for the operation and maintenance of the project for a period of five years. The successful bidder will also have to furnish a security deposit at 10 per cent of the allotted work order value on or before 15 days from the issuance of the work order.

In June 2022, JREDA called for Expression of Interest (EoI) to establish an 18 MW grid-connected solar power project. A RESCO model will be adopted for the said project which will be located at the Giridih Solar City under the Solar City Program.

Recently, the Jharkhand government also launched its state solar policy titled “Jharkhand Solar Policy 2022”. The policy will be in effect for five years. The state intends to deploy a total solar capacity of 4 GW by 2026 across utility-scale, distributed and off-grid solar projects. 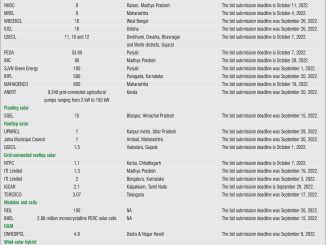 September 26, 2022
On behalf of the Ministry of Home Affairs (MHA), the Solar Energy Corporation of India Limited (SECI) has invited proposals to develop a total of 50 M...
More