State-owned generation utility Gujarat State Electricity Corporation Limited (GSECL) plays a strategic role in meeting Gujarat’s power needs. It has built a sizeable power generation portfolio of more than 6 GW, comprising a mix of technologies – coal, lignite, gas, hydro and renewable energy. In view of the energy transition, GSECL has taken a number of initiatives to respond to the new and changing requirements. From building a more balanced portfolio by adding more renewables to its installed base, improving the efficiency performance of its existing assets via retrofits and modernisation initiatives, and ensuring compliance of its projects with environment norms, to adding flexibility to its thermal power assets as Gujarat prepares to integrate more renewable energy into the grid, GSECL is adapting itself to prepare for the future grid.

A key achievement for the genco was the commissioning of an 800 MW coal-based unit at the Wanakbori thermal power station (TPS) in March 2019. It started commercial operations in December 2019. It is the first supercritical technology-based project commissioned by the company. On the renewable energy front, GSECL started commercial operation of a 75 MW solar PV-based power project (Phase I) at Dhuvaran, in February 2019. In addition, GSECL achieved an all-time high of 148 per cent in ash despatch from its coal- and lignite-based power plants during 2019-20.

To enhance the flexible operation of coal-based plants in order to support renewable energy integration, a lower minimum technical load trial of up to 200 MW (40 per cent) was successfully completed at the 500 MW Unit 6 of the Ukai TPS in March 2020. For this, the company received technical assistance from Bharat Heavy Electricals Limited and Deloitte under an MoU with the United States Agency for International Development. GSECL is also making efforts to ensure compliance of its generating units with the environment norms. Currently, of the 5,160 MW installed coal- and lignite-based power plants, 3,140 MW of capacity is already compliant with the particulate matter (PM) norms. Of the remaining 2,020 MW, electrostatic precipitator upgradation has been completed for 1,240 MW. All these plants are planned to be made compliant with the new PM norms by mid-2022. For the control of SOx emissions, flue gas desulphurisation systems have been planned for 4,585 MW of capacity. On the renewable energy front, a 75 MW solar PV-based power project (Phase 2) at Dhuvaran is in the implementation phase. Further, a 2×100 MW solar PV project is under implementation at the Raghaneshda Solar Park. The genco is also undertaking 2,500 MW of solar PV projects for power supply under the Suryashakti Kisan Yojana. 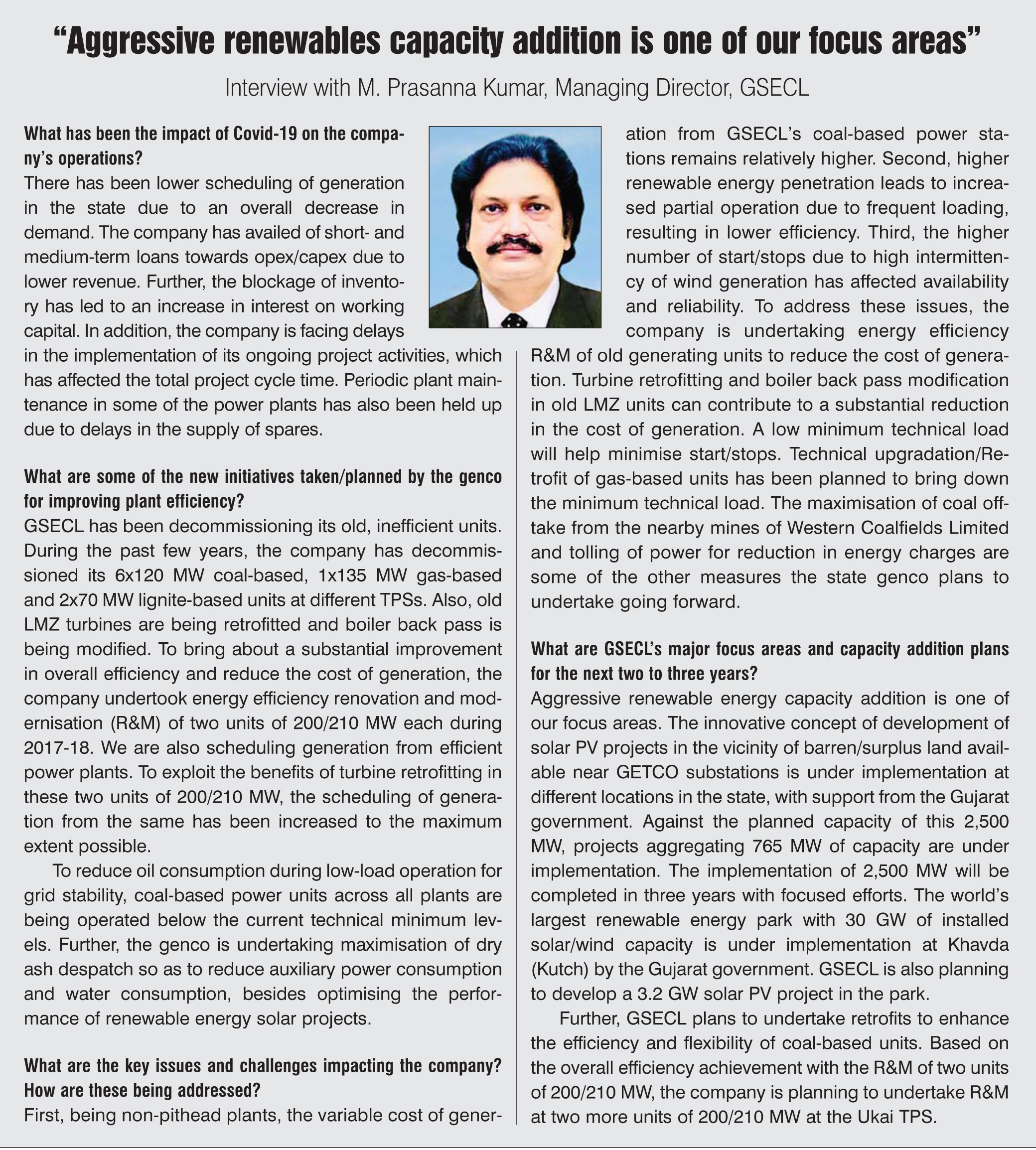 Net, net, GSECL’s initiatives and investments are expected to strengthen its foothold in the state’s power sector and and help it respond to disruptions in the sector.

Solar Tilt: Karnataka makes good progress but needs to broaden its renewables’ base

Karnataka has witnessed an unprecedented growth in renewable energy installations over the past few years, fuelled by the state government’s initiatives  for providing 24×7 power to all and improving energy security in the long run. […]

Energy storage has emerged as a key element of grid stabilisaton and electric vehicle (EV) uptake. In the renewable energy sector, it addresses the intermittency issue of solar and wind power, and ensures a smooth […]

RWE, a German energy utility company, has expanded its presence in Spain by opening a solar farm named Casa Valdes near Madrid. The 44 MW solar farm, which is situated in the province of Guadalajara, […]