Solar has become the lowest cost electricity source in more and more locations globally. According to the latest report by the International Renewable Energy Agency (IRENA), the levelized cost of energy (LCOE) generated by large scale solar plants is around $0.068 per kWh, compared to $0.378 per kWh ten years ago. Between 2018 and 2019 alone, the price droppedby 13.1 percent.

This has been made possibledue to the emergence of high efficiency, low cost technologies such as PERC, PERT and bifacial modules. Of these, PERC is a mature technology with a relatively simple process and therefore benefits from low cost of ownership. With PERC technology, a record cell efficiency of 24.06 percent was reached by LONGi (January 2019). While record efficiencies are good, what counts more are conversion efficiency averages in volume production and efficiency stability over time.Technology experts have often pointed out the challenge that PERC technology faces in early days with regard to the potential degradation effects. LONGi understood the challenge early on and started research and testing to address the issue of Light Induced Degradation (LID) in PERC cellsand modules quite early on in order to prevent degradation issues and offer the best quality modules to its customers.

LID is generally considered  as caused by boron-oxygen complex  formed under light illumination, which reduces solar cell efficiency and power. To mitigate LID, we can either reduce oxygen concentration in wafer or replace Boron (B) with other dopants, such as Gallium (Ga).  Research carried out jointly by ISFH and LONGi has demonstrated Ga-doping and low oxygen wafer are effective, as demonstrated in figure 1.

Figure 1: Impact of Ga-doping and low oxygen on cell efficiency 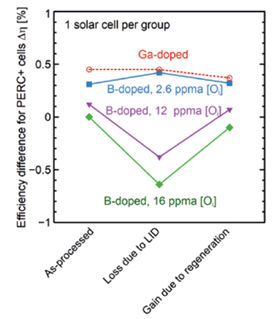 With process optimization at ingot pulling and cell manufacturing, solar cells made with Ga doped wafers demonstrated efficiency improvement of 0.06-0.12% (abs.) comparing to B doped wafers.

In the last few years, another solar cell/module efficiency degradation phenomenon has caught everyone’s attention, light and elevated temperature induced degradation, aka LeTID.  LeTID is believed to be caused by interaction between metal impurity and hydrogen in wafers.  With Ga doped wafers, it is easier to control LeTID on solar cells, as there is no need to introduce excessive hydrogen in cell processing to mitigate LID as required for B doped wafers.

Throughthorough research and testing, LONGi’s technology experts concluded that LID and LeTID problems could be effectively solved by using gallium-doped monocrystalline silicon wafers in combination with cell process control, without the need for regeneration (light injection or electrical injection) treatment. Compared with boron-doped silicon wafer, gallium-doped silicon wafer can improve the efficiency of PERC cells to some extent.There is no boron-oxygen complex in gallium-doped PERC cells, so there is not the usual phenomenon of boron-oxygen LID. In a recent white papertitled “Gallium-doped monocrystalline silicon fully solves the problem of a PERC module’s LID”, released by LONGi, the PV technology providerhas summarizedits findingson the subject, supported by related studies. Research strongly indicates that application of gallium-doped silicon wafers can effectively mitigate the initial LID from which cells using boron-doped p-type silicon wafers have long suffered.

LONGi team conducted a LID Test of Gallium-doped and Boron-doped PERC cells. The test used LONGi’s bifacial PERC cells (which had the cell efficiency of about 22.7 per cent). Following is part of the test scheme including the test item, and type and quantity of cells:

1sun, 75°C: In order to fully reflect the LeTID, LONGi’s mass produced cell adopted a test temperature of 75°C. Figure 2 shows the 264h test results at 1sun, 75°C. The boron-doped cell degrades to a maximum of 2.3 per cent at 8hours and then recovers to a stable value of 1.3 per cent at 96hours. The degradation value of gallium-doped cells is basically stable at 96hours, which is 1.2 per cent, and then slowly degraded to 1.3 per cent (216hours) and then recovered slightly. 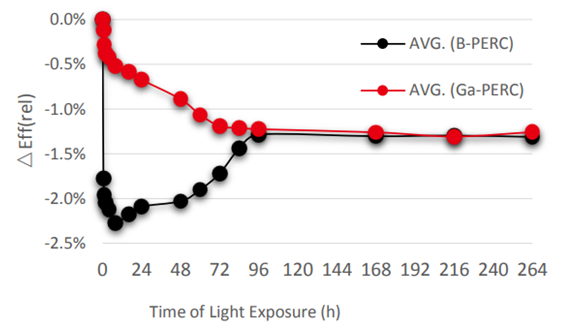 ×10suns, >100°C: The LeTID process can be accelerated by adopting ×10suns, >100°C. The test results of gallium-doped PERC cells under this method are shown in Figure 3. Using this test method, the gallium-doped cell also experienced a process of first degrading and then returning to stability. The degradation reached the maximum value of 1.05 per cent at 5minute and began to stabilize at a fairly low level of 0.3 per cent at 90minutes. 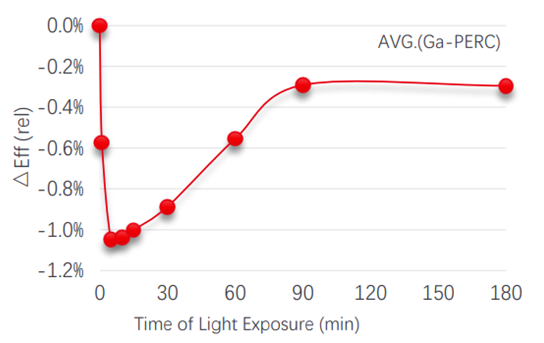 Tine U. Naerland from Azizona State University (along with other researchers) studied the minority carrier lifetime degradation of indium-doped, gallium-doped and boron-doped silicon wafers without impurities at room temperature 25°C, as shown in Figure 4. 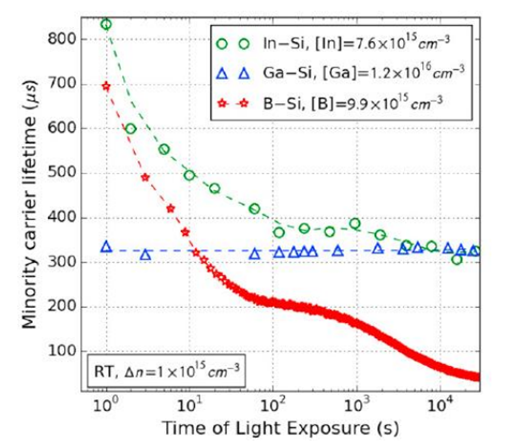 Another related research has been made by Nicholas Grant and John Murphy from the University of Warwick who recently studied the viability of indium doping and found that its relatively deep acceptor level limits its potential. “Gallium doped silicon has demonstrated very stable and high lifetimes when subject to extended illumination. There have also not been any known detrimental recombination active defects,”said Grant in a recent interaction with a leading solar industry journal.The application of gallium-doped silicon wafers can effectively mitigate the initial LID from which cells using boron-doped p-type silicon wafers have long suffered. Hence, gallium-doped silicon does not require the additional stabilization steps used to mitigate degradation, unlike the boron-doped status quo. The average efficiency of gallium-doped cells is 0.09% higher than that of boron-doped cells.

LONGi’s testing of gallium-doped PERC cells at different temperatures clearly reflects thatcompared with boron-doped cells, gallium-doped cells show significantly lower degradation and is supported by credible and detailed literature.This further supports the conclusion in one of its previous white papers that the use of gallium-doped silicon wafers can solve the LID problem of PERC technology.

Going forward, LONGi’s R&D team aims to continue studying the characteristics of gallium-doped silicon in order to obtain a reasonable resistivity range and higher doping accuracy to improve the gallium-doping process, from both a cost and quality standpoint.We believe that with the reduction in degradation, decrease in cost and increase in reliability, gallium doped silicon solar modules will be more cost-effective in the future practical applicationand  will bring better value to our customers