In 2019, global PV inverter shipments increased by 18% on a YOY basis with total shipments reaching 126,735 MW according to the report released by Wood Mackenzie. Growatt shipped a total capacity of over 5GW for the year and ranked No.8 among the inverter suppliers. The company has been pursuing a global strategy of localization in recent years and has gained strong growth momentum across the world. 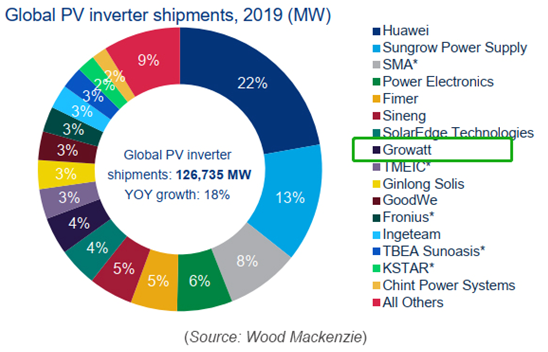 Growatt has its presence in Europe for 10 years and its products are well received in the region for its high efficiency, superior quality and enhanced safety. In addition to that, Zhang attributed the company’s popularity to its extraordinary local service capability. In APAC according to the report, Growatt was the No.4 PV inverter supplier in the region, and was top of inverter suppliers that focus on the manufacturing of string inverters. Earlier this month, the company was also ranked the No.1 inverter supplier of rooftop solar sector in India according to the report by JMK Research & Analytics.

“We have also built strong foundation in the Americas. In Brazil, we founded a service center last year and we have established partnership with Aldo Solar, the largest distributor in the market,” Zhang added. In the Americas, Growatt has launched intensive marketing campaigns and its sales are going up substantially.