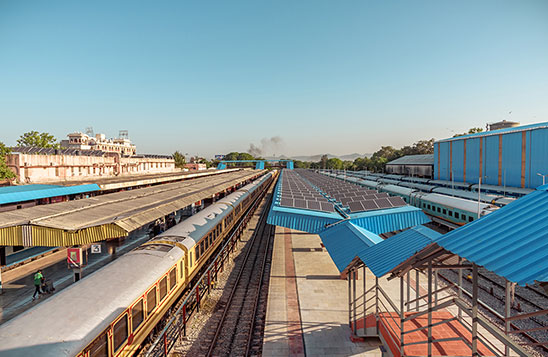 The Tamil Nadu Electricity Regulatory Commission (TNERC) has issued an order directing the Tamil Nadu Generation and Distribution Corporation (TANGEDCO) to provide the Southern Railway with low-tension and high-tension (HT) metering connectivity for 4 MW of rooftop solar projects. The Southern Railways filed a petition with the state electricity commission asking it to grant connectivity and net metering facilities for the 4 MW rooftop solar project and for solar projects that will be set up in future. The petition was filed for the solar projects connected under the HT II-A and HT III tariff category for consumers in Tamil Nadu as per an older TNERC order from 2013.

Indian Railways is planning to source approximately 1,000 MW of solar power and nearly 200 MW of wind power by 2021-22 across zonal railways and production units. Indian Railways plans to install 500 MW of the 1 GW on the rooftop of railway buildings while the remaining 500 MW will be used to meet both traction and non-traction requirements. In a move to conserve energy, the South Central Railways has also installed solar panels at stations and service buildings across the zone.

Indian Railways plans to be a net-zero carbon emitter by 2030. To this end, it intends to increase the use of renewable energy in its operations. This presents a huge potential for renewable energy development, particularly solar and biofuel. While railway premises offer suitable sites for solar installations, the bulk use of diesel as fuel provides an opportunity for biodiesel. The Indian Railways Organisation for Alternative Fuel (IROAF) is the single-window entity for the work related to the use of alternative fuels in railways. The organisation’s objectives include switching to biodiesel and promoting the use of solar energy in rolling stock and mechanical assets.