Recently, BloombergNEF released a note entitled “Solar Module & Inverter Bankability 2019”, which included the investigation of inverters for the first time. They surveyed the bankability of several inverter brands. SOLIS inverters are highly recognized by global technical experts and respondents, and ranked third among the Asian brands. This means that banks are more willing to offer non-recourse loans to photovoltaic power generation projects using SOLIS inverters. Here are the results. 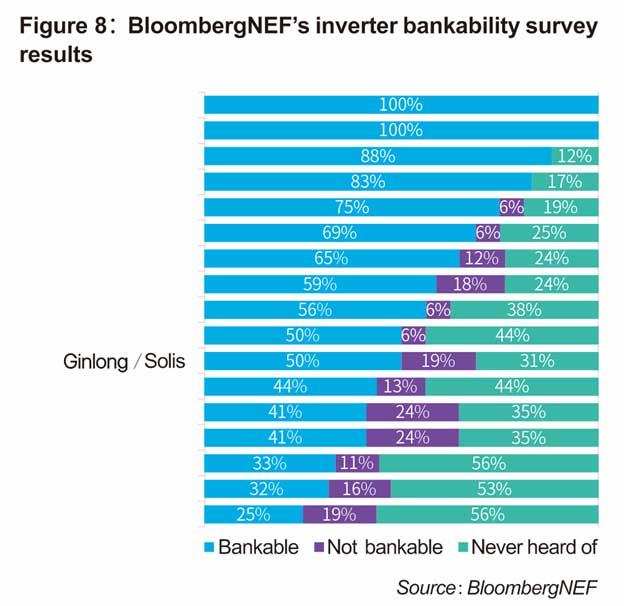 With a team of experts spread across six continents, BloombergNEF (BNEF) leverages the world’s most sophisticated data sets to create clear perspectives and in-depth forecasts that frame the financial, economic and policy implications of industry-transforming trends and technologies.

BloombergNEF’s survey asked banks, developers and technical due diligence firms which brands, out of 48 module manufacturers and 17 inverter manufacturers, they considered bankable.

For inverters, much more than modules, BloombergNEF observed regional differences. Some Chinese inverter brands were considered bankable only by Chinese respondents. Europe- headquartered brands are considered bankable by most respondents, but some Chinese respondents had never heard of them. This is because unlike modules, inverters are not really a commodity. Modules have one function, producing energy, and inverters have different functions. Apart from converting direct current into alternating current, they are the interface with the grid and aggregate power output data. Hence there are different types of inverters for different project requirements (some inverters operate at 1000V, others at 1500V, some projects require central inverters while other require string inverters, etc.) Complexity of inverters makes local support an important bankability criteria Unlike for modules, inverter warranties are around 5-10 years and inverters will need replacement of parts and maintenance throughout their lifetime.

Established in 2005, Ginlong Technologies (Stock Code: 300763.SZ) is one of the oldest and largest manufacturers of PV string inverters. Presented under the Solis brand, the company’s portfolio uses innovative string inverter technology to deliver first-class reliability that has been validated under the most stringent international certifications. Armed with a global supply chain, world-class R&D and manufacturing capabilities, Ginlong optimizes its Solis inverters for each regional market, servicing and supporting its customers with its team of local experts. For more information on how cost-effective Solis delivers value while maximizing reliability for residential, commercial, and utility customers, go to ginlong.com.