Sembcorp Energy India Limited (SEIL), formerly known as Thermal Powertech Corporation of India Limited (TPCIL), is a leading independent power producer (IPP) in the country with about 4.38 GW of thermal and renewable power capacity in operation and under development.

SEIL is promoted by Sembcorp Utilities Pte Limited, a wholly owned subsidiary of Singapore-based global conglomerate Sembcorp Industries. The Sembcorp Group, which owns more than 12 GW of projects globally, entered the Indian market in 2010 with the acquisition of a 49 per cent stake in TPCIL. Today, it is one of the largest foreign investors in the Indian power sector.

In 2018, SEIL underwent a reorganisation wherein the Sembcorp Group’s Indian energy businesses were consolidated. The Sembcorp Group has stakes in Sembcorp Gayatri Power Limited (SGPL), which focuses on thermal power, and Sembcorp Green Infra Limited (SGIL), which focuses on renewable energy. As a result of the corporate reorganisation that became effective in February 2018, SEIL acquired 100 per cent of the equity shares of SGPL and SGIL, thereby making them wholly owned subsidiaries of SEIL. In the latest annual report, Vipul Tuli, managing director, SEIL, stated, “2017-18 was a watershed year for Sembcorp Energy India, during which we consolidated Sembcorp’s Indian thermal and renewables businesses. With the acquisition of SGIL and SGPL, the company now has a balanced and efficient energy portfolio, competitive scale and strong capabilities. This is a sustainable platform from which we shall participate in India’s energy and environmental transition.”

The SGPL TPP so far has short- and medium-term PPAs. In August 2018, SEIL, through SGPL, won a competitive tender conducted by the Bangladesh Power Development Board to supply 250 MW of power to Bangladesh over a period of 15 years. In a press statement, Tuli remarked, “This bid fits into SEIL’s strategy of providing cost-competitive and  reliable power while prudently  contracting our balance open capacity  at viable tariffs.”

SEIL has an installed renewable energy capacity of 1,192 MW spread across wind and solar energy projects in several states. The company has over 30 wind energy projects aggregating 1,152 MW in Tamil Nadu, Karnataka, Gujarat, Madhya Pradesh, Maharashtra, Rajasthan and Andhra Pradesh. In the solar segment, the company operates three projects totalling 35 MW in Gujarat and Rajasthan. Notably, the company has long-term PPAs for 96 per cent of its renewable energy capacity.

In March 2018, SEIL received a letter of award for a 300 MW wind power project won in the third nationwide wind energy auction conducted by the Solar Energy Corporation of India (SECI). This marked the third consecutive win by the company in national wind energy auctions, taking its tally to 800 MW. In a press release, Tuli said, “Being named a winner in each of the nation’s three successive  wind power auctions to date is a  strong endorsement of our  competitiveness and capabilities in renewable energy.”

In the two earlier auctions, the company had secured a 250 MW wind power project in Chandragiri, Tamil Nadu, under a PPA with PTC India Limited and another 250 MW project under a PPA with SECI. The Chandragiri project, commissioned in October 2018, supplies power to Jharkhand, Bihar, Uttar Pradesh and Delhi. 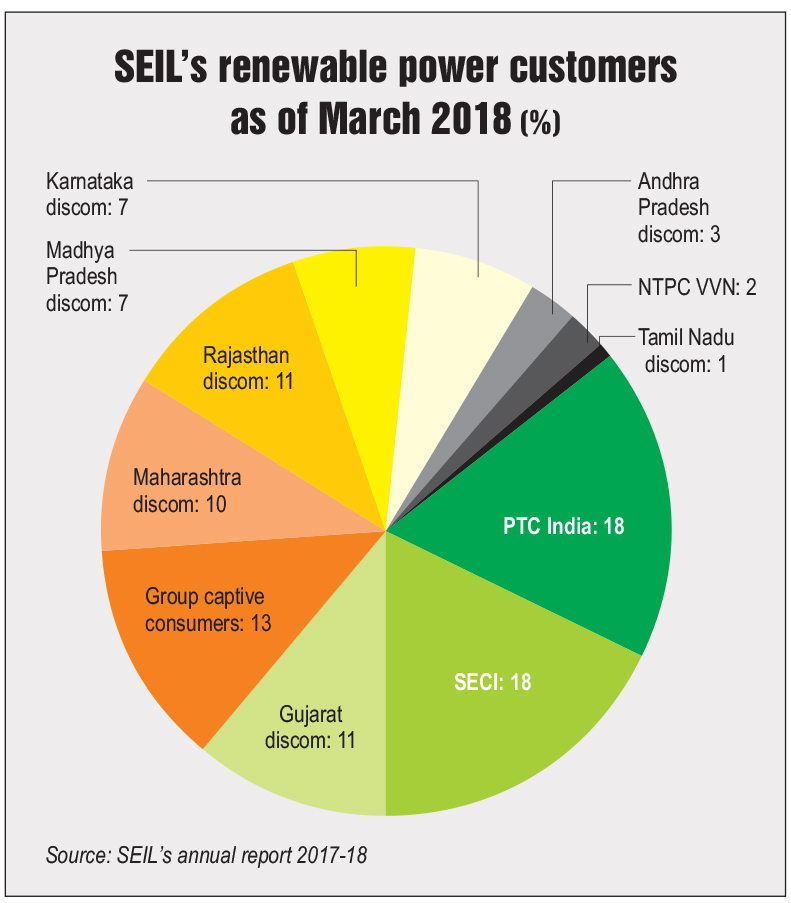 In the first quarter of 2019, SEIL’s parent company, Sembcorp Industries’ profit from operations (PFO) stood at S$216 million, an increase of 14 per cent over the previous year. This is partly owing to good performance by the company’s India business under SEIL, which recorded a PFO of S$75 million in the first quarter of 2019 versus S$67 million in the same quarter last year.

With plans to list on the country’s bourses, SEIL filed the draft red herring prospectus (DRHP) with the Securities and Exchange Board of India in February 2018. However, the company withdrew the DRHP earlier this year as its promoter, Sembcorp Utilities, proposed to infuse fresh equity in SEIL and this change in capital structure necessitated the withdrawal of the DRHP under Indian regulatory requirements.

In July 2019, Sembcorp Utilities increased its stake in SEIL from 93.73 per cent to 94.05 per cent by way of subscription to 275 million additional shares. Based on the fair value of the shares, Sembcorp has injected equity of about Rs 5,169 million (about S$101.6 million) into SEIL to support the growth of its renewable energy business. The equity injection was funded through a mix of internal funds and borrowings. The balance of the shares in SEIL is owned by local partner Gayatri Energy Ventures Private Limited.

The power generation segment has been facing issues owing to a lack of long-term power procurement bids by discoms, a shortage of domestic coal and payment delays by discoms. SEIL is also struggling to secure additional long-term PPAs for its thermal business as currently only about 40 per cent of its thermal capacity is tied up under long-term PPAs. In the renewable segment, the company, like other renewable energy developers, faces challenges owing to delays in the completion of transmission infrastructure and discoms’ requests to renegotiate PPAs. However, given the government’s focus on resolving sectoral issues by introducing measures such as payment security mechanisms and aggregation of power demand by states, IPPs including SEIL are expected to benefit. SEIL has also, reportedly, participated in the Pilot Scheme II, which will help in power offtake from projects without long-term PPAs.

Going forward, SEIL plans to focus on expanding its renewable energy portfolio by adding 300-500 MW of capacity every year. While large wind power projects will remain its key focus area, it will also explore opportunities in solar energy, hybrid renewables and ancillary services. At present, two wind projects aggregating 550 MW are under construction. In the thermal segment, the company aims to operate its assets efficiently and increase the share of long-term PPAs in its sales mix. SEIL also intends to file a revised DRHP at a later stage this year after taking into consideration market conditions.

Overall, SEIL has achieved reasonable growth in the Indian power sector and is poised to grow further, given the company’s strong track record in operating power projects across the conventional and renewable power segments.