Risen Energy contributed 9.41% of module supply to the total 6,146 MW estimated DC capacity. Due to this number, Risen Energy is the number. 1 module supplier for projects commissioned in 2019 FY in India. For the overall cumulative module shipment ranking, Risen is ranked fourth and is expected to rise for the next fiscal year.

As per Energy Trend’s report, India became the world’s top 3 player in the PV market, with a total solar module demand of 9.3 GW in 2018. India launched its National Solar Missionin 2015,which set an installation target of 100GW by the year 2022.

Xie Jian, President of Risen Energy Group, commented, “India is no doubt one of Risen Energy’s quintessential strategic markets, not only because India has showcased huge growth potential inthe past several years, but also because Risen Energy’s module products have been widely accepted and deployed by Indian customers and projects. For large scale projects especially, our 2019 FY performance enhanced our confidence inthis market. And of course, we are making efforts in other market segments too. Our innovative technology and products will piquemore interest among India’s rooftop projects. We are encouraged by this historic performance to dedicate more recourse to the research of this single market’s unique demand.” 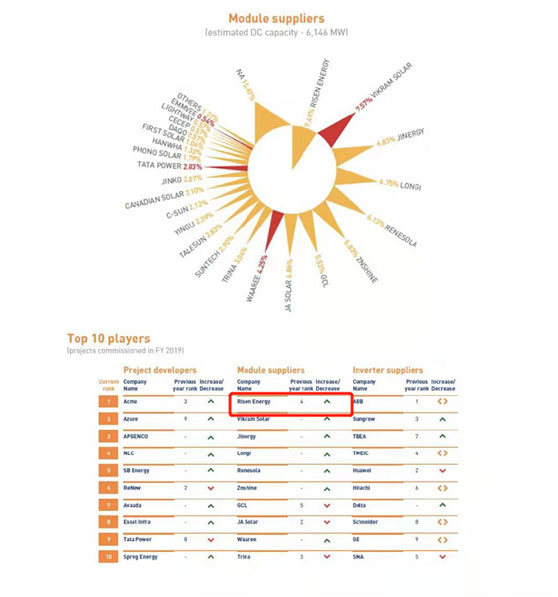 Risen Energy Co., Ltd. was founded in 1986 and listed as a Chinese public company (Stock Code: 300118) in 2010. Risen Energy is one of the pioneers in solar industry and has committed to this industry as a R&D expert, an integrated manufacturer from wafers to modules, a manufacturer of off-grid systems, and also an investor, a developer and an EPC of PV projects. Aiming to deliver the green energy worldwide, Risen Energy is developing internationally with offices and sales networks in China, Germany, Australia, Mexico, India, Japan, USA and others. After years of efforts, it has reached a module production capacity of 8.6GW. While growing rapidly, Risen Energy keeps a stable pace with an average debt ratio at around 50% from 2011 to 2018.