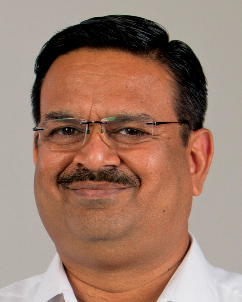 Venkatesh Dwivedi brings to the table over 25 years of experience in the energy sector. At present, he is serving as director, projects at Energy Efficiency Services Limited (EESL). He was the first project manager of EESL’s flagship scheme, UJALA, as well as the first programme manager for the Street Lighting National Programme. In fact, the latter remains his most memorable assignment.

Prior to his current role at EESL, Dwivedi served in various roles in the areas of operations, technical services, project management and business development.

On the energy efficiency market in India, he comments, “With minimal regulatory intervention, the government has endeavoured to facilitate an enabling environment for the adoption of new technologies.” On EESL’s role, he says, “EESL is attempting to transform and scale the market for several energy efficiency solutions – agriculture and municipal pump sets, domestic and street lighting, smart meters, electric mobility, and solar lamps – and drive renewable energy generation. EESL’s approach of aggregating demand ensures that the market attracts industry participation while passing on the benefits of cost reduction, created through bulk procurement, to consumers.”

Dwivedi believes that one of the most noteworthy aspects of EESL’s success is that the market transformation for energy efficiency has been achieved without any government subsidies. “EESL will continue to build on these achievements, endeavouring to stimulate markets for solutions that are relevant to the bulk of society, recalibrating the ecosystem to enable the adoption of these solutions and driving a large-scale social impact”

Dwivedi says that he has a collaborative management style. “I assess the situation and consult the team members for achieving a fruitful outcome.” In the future, he says he aims to create an impact in the energy efficiency space through innovative solutions, unlock new technologies and sustain the markets for energy efficiency under the government’s Smart Cities plan.

On the personal front, Dwivedi says he likes reading. His reading list includes, Mapping Power: The Political Economy of Electricity in India’s States, Tipping Point and The Last Watchman of Old Cairo.

Dwivedi is an electrical engineer from the Faculty of Engineering and Technology, Jamia Millia Islamia, New Delhi, and has an MBA from IIM Calcutta. He is also a certified energy auditor from BEE.