On July 9th (local time), the 9th China-Germany Economic and Technical Cooperation Forum kicked off in Berlin, Germany. Jointly hosted by the National Development and Reform Commission of China and the Federal Ministry for Economic Affairs and Energy of Germany, the forum included distinguished guests and speakers such as Chinese Premier Li Keqiang and German Chancellor Angela Merkel. As a representative of renewable energy companies, LONGi President Li Zhenguo was invited and to share his opinions on ¡°Energy Transformation and Energy Conservation¡±. 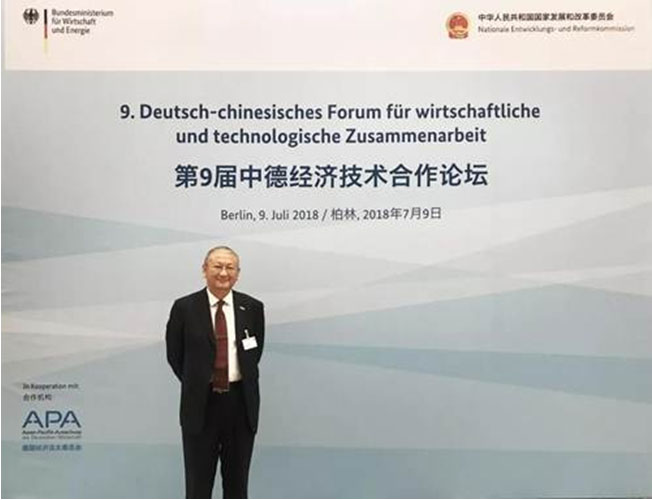 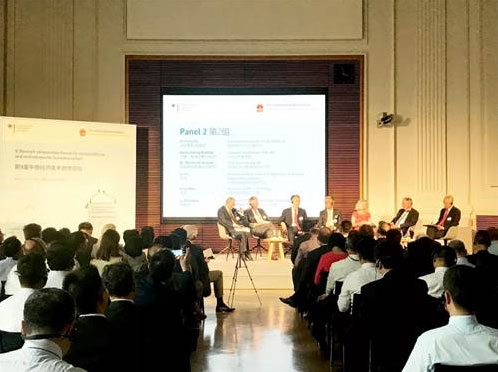 Mr. Li Zhenguo said, ¡°In recent years, PV technology has developed rapidly and cost has dropped quickly. In the past decade, continuous breakthroughs in technology, in both the speed of enhancing conversion efficiency and lowering costs have exceeded everybody¡¯s imagination. In the next 2-3 years, PV will become the cheapest power source in most parts of the world. And, within 10 years, PV + energy storage will become the cheapest energy solution. Once the economic efficiency of the PV and energy storage is realized, traditional fossil fuels will be quickly replaced.¡±

¡°Photovoltaic power ¨C when it achieves grid parity worldwide – can contribute to our social responsibility of restoring the earth’s ecology.¡± Painting a scenario, Mr. Li added, ¡°large-scale desalination of seawater can be powered with photovoltaic energy; the desalinated seawater can be transported to dry desert, creating arable land. When vegetation is formed, green plants absorb carbon dioxide in the air, reducing its concentration in the atmosphere and repairing the damage of human development to Earth.¡±

¡°Upholding the mission of ¡®producing clean energy with clean energy¡¯, LONGi has been accelerating the deployment of its high-efficiency production capacities in Yunnan and Malaysia since 2015, using almost 100% hydropower to produce PV products. This has benefited the local population with green production. With large-scale deployment of Photovoltaic + Energy Storage, we believe it will realize the manufacturing goal of “Solar for Solar”. Leaving future generation with green mountains and clean waters, and benefiting the global community with clean energy are our bound duty and responsibility!¡±

The launch of Germany¡¯s Renewable Energy Act or EEG (German:  Erneuerbare-Energien-Gesetz) in 2004 opened the door for renewable photovoltaic energy and contributed substantially to the development of the global photovoltaic industry. Cumulative photovoltaic installations in Germany grew from less than 1GW in 2004 to over 100GW in 2017. Over the past 10 years, the speed of technological progress and cost reduction were beyond anyone¡¯s imagination. For instance, the price of mono-silicon wafer dropped from USD$13 to 44.5 US cents per piece, and module prices declined from USD 4/Wp to 30 US-cents/Wp today. This has made photovoltaic competitive with traditional fossil as a form of energy production. In regions with high irradiance such as Middle East and South America, a large number of projects were developed at a bided on-grid price of less than 2 US-cents/Kwh. Photovoltaic energy has become the cheapest electricity source in these areas.

Photovoltaic technology is still developing rapidly while cost continues to decline. In the next 2-3 years, photovoltaic power will become the cheapest power source in many parts of the world. Concurrently, the technology for battery energy storage has progressed rapidly. We believe that photovoltaic paired with energy storage will become a viable energy source within 10 years. Once the economic efficiency of PV and energy storage is reached, traditional fossil energy will be quickly replaced. In November 2017, the German Energy Watch Group and Lappeenranta University of Technology in Finland jointly published a research paper projecting 100% renewable energy resources can be achieved on a global scale by 2050. The renewable mix will consist of 69% photovoltaic, 18% wind, 8% hydro and the balance comprising biomass and tidal energy sources. In this scenario, battery energy storage will cover 31% of electricity demand. Photovoltaic will be a 1000-GW industry.

Photovoltaic power ¨C when it achieves grid parity worldwide – can contribute to the social responsibility of restoring the earth’s ecology. For example, large-scale desalination of seawater can be powered with photovoltaic energy; the desalinated seawater can be elevated and transported to dry desert, creating arable land. When vegetation is formed, green plants absorb carbon dioxide in the air, reducing its concentration in the atmosphere and repairing the damage of human development to Earth. The demand for photovoltaic will be further increased.

With large-scale deployment of Photovoltaic + Energy Storage, LONGi believes it will realize the manufacturing goal of “Solar for Solar” (photovoltaic products manufactured with photovoltaic energy). Besides providing clean energy to the world, LONGi will also use clean energy in production.

¡°Better utilizing sunshine, making a green energy world¡± is a development theme in LONGi. Let us work together and make this dream come true, as early as possible!